In news that probably will not shock anyone, “The Meg,” the long-gestating screen adaptation of Steve Alten’s best-selling novel, comes nowhere close to equalling the genius of Steven Spielberg’s “Jaws”—considering that that film is one of the few truly perfect works conjured up in the history of American cinema. It is not even on a par with “The Shallows,” the ingenious 2016 Blake Lively thriller that is probably the best of all the post-“Jaws” shark-based entertainments to come along in the ensuing decades. When all is said and done, it is little more than a cheesy thriller in which a jumbo-sized shark wreaks havoc on the cast until Jason Statham arrives to save the day—the only real question being whether Statham will actually punch the creature into oblivion or not. (“Sharkpuncher”—that does have a ring to it.) The good news is that it at least is perfectly aware of what it's supposed to be doing—supplying viewers with enough aquatic carnage (though not enough to threaten the PG-13 rating) to painlessly pass a couple of hours in the multiplex during the dog days of August—and manages to accomplish that modest goal with minimum fuss. The end result may be little more than an exponentially more expensive version of those cheapo Syfy channel movies, but at least it has the good taste to be exponentially better as well.

Statham plays Jonas Taylor, the world’s best deep-sea rescue diver. Well, he was the world’s best until a rescue attempt in the Philippines went sour, and his claims that the ship was attacked by a mysterious unseen creature are dismissed as pressure-induced psychosis and cause him to lose everything. Five years later, he is on an unending bender in Thailand when he is visited by an old colleague, inevitably named Mac (Cliff Curtis) and, Mac’s new boss, Zhang (Winston Chao), who is the head of an underwater research facility outside of Shanghai that is looking into the possibility of a previously undetected undersea realm beneath the floor of the Marianas Trench. While exploring this new world, the sub containing three members of the research team, one of whom just happens to be Jonas’s ex-wife (Jessica McNamee) is hit by something and leaves them crippled and with a rescue window of about 18 hours. Would Jonas perhaps consider taking advantage of the opportunity to save his ex, confront his fears and prove that he wasn’t crazy after all?

In a shocking turn of events, Jonas agrees and is taken out to the facility, where he is introduced to the highly selected group of walking cliches that include Rainn Wilson as the egomaniacal billionaire who is funding the whole thing, Ruby Rose as the edgy tech genius who is, perhaps inevitably, named Jaxx, Page Kennedy as the wacky African-American who doesn’t know how to swim and didn’t sign up for this, and Bingbing Li as Suyin, who is Zhang’s daughter and who supplies the film with a precocious eight-year-old daughter (Shuya Sophia Cai), a potential romantic interest for Jonas and, perhaps most importantly, box-office interest from the increasingly important Chinese audience. (There are also a lot of additional people who mysteriously appear when needed and then vanish when they are not.) Anyway, during the rescue attempt, the creature attacks again and proves to be no less than a megalodon, a deadly shark about 70 feet long that had been assumed to be extinct. Before Jonas can say “I told you so” to everyone within earshot, it is discovered that the beast has managed to escape from the depths where it had been contained and has reached open water. Now he and the others must figure out a way to bring the megalodon down before it can use a crowded nearby beach as its reentry point to the top of the food chain.

“The Meg” (whose story, from what I understand, is quite different from the original novel) may not be the most ferociously original film ever made—to be fair, though, with a tale involving drunken divers, ex-wives, goofy money men and a shark most people do not believe exists, there are times when it feels less like a “Jaws” knockoff and more like a bizarre riff on “The Life Aquatic with Steve Zissou.” The emphasis here is more on goofy action thrills than on gut-crunching scares and in that regards, it was a good idea to give the directorial reins to Jon Turteltaub, whose name may not symbolize horror filmmaking (depending on your personal stance towards “While You Were Sleeping,” of course) but whose “National Treasure” films also told stories that started off being completely preposterous and then got progressively sillier as they went on. Here, he clearly went into the project knowing that he was never going to top “Jaws” in terms of thrills and instead takes a lighter, sillier approach—well, as light and silly as can be with a film in which people are eaten by sharks. The screenplay is filled with cliches but at least they have been deployed with a certain amount of wit and style this time around, and there are even a couple of moments in which he uses the audience’s presumptions to make for some real surprises.

Serving as the center of all the surrounding silliness is Statham and while it may not necessarily sound like a compliment, he is actually the perfect person for a film like this. He has the straightforward heroic demeanor down pat while also possessing a tongue-in-cheek sense of humor that is a nice complement to the surrounding nonsense.

“The Meg” is no masterpiece by any means—the inevitable attack on swarms of innocent swimmers feels oddly truncated and the climactic battle is not nearly as exciting as some of the earlier action beats. However, it manages to hit upon a reasonably effective blend of action and humor that never sinks to the strained depths of the “Sharknado” saga and similar films that have emerged since the technology was developed to bring poorly rendered CGI sharks to the masses (and, truth be told, I also vastly prefer it to that “Jurassic World: Fallen Kingdom” gibberish). And when "The Meg" finally arrives at its most overt “Jaws” reference, the film proves to be more clever and amusing than one might ordinarily expect under the circumstances. Who could ask for anything more—except for more sharkpunching, of course. 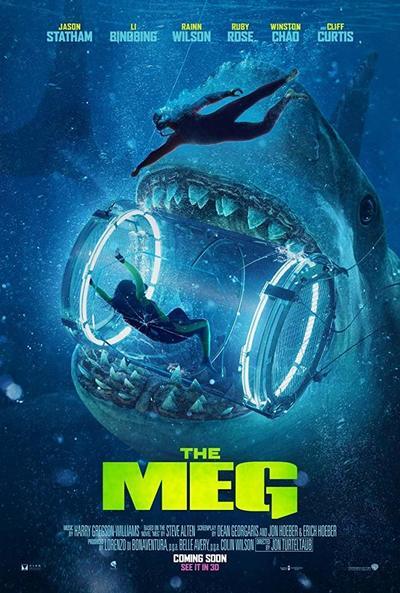 Rated PG-13 for action/peril, bloody images and some language.

Writer (based on the novel "Meg" by)