Films often impart important life lessons in the guise of entertainment. For instance, thanks to Oliver Stone’s “The Hand” from 1981, I will never EVER stick my own hand out of a window while driving in a car, lest it ends up being sliced off and skedaddles away in order to commit acts of great evil.

But one fairly consistent cinematic rule of thumb, especially in horror and sci-fi movies that range from 1931’s “Frankenstein” to last year’s “Ex Machina,” is this: Do not be tempted to play God and create an artificial, human-like being. Such incidents of hubris almost never turn out well. Stick with imaginary friends if you must, although they sometimes turn out badly, too (i.e. “Drop Dead Fred”).

Along comes “Morgan” to add to the chorus of misguided scientists who have proclaimed a variation on “It’s alive!” over the years. This cautionary thriller about the dangers of bioengineering doubles as a kind of a passing of the torch (not carried by angry villagers) between directors with shared DNA. That would be Luke Scott, making his feature debut, and father Ridley, who acts as producer. Clearly, this son, who was a second unit director on Dad’s "The Martian" and “Exodus: Gods and Kings,” has paid attention to the old man’s output over the years since “Morgan” is littered with obvious nods.

But it makes sense, considering that Sir Ridley’s “Alien” remains one of the most influential examples of big-screen sci-fi spookiness ever made and even features a devious fake human in the form of Ian Holm’s android Ash. In addition, “Morgan” concludes with a very physical face-off between two strong females not unlike the one between Sigourney Weaver’s Ripley and the alien queen, while also boasting a commendably diverse cast, much like such Scott productions as “The Martian” and TV’s “The Good Wife.”

But sometimes such formulaic familiarity proves to be a drawback in a genre that is propelled in large part by plot developments meant to catch the audience off guard. For instance, the minute we see the determined visage and no-nonsense coif of Kate Mara’s risk-management consultant Lee Weathers as she drives down a gravel road to a remote woodsy compound, she is obviously not an entity to be messed with or taken lightly.

“Corporate,” we learn, has sent her to assess the circumstances surrounding a horribly violent attack committed by Morgan, an artificial being in the guise of a fair-skinned waif of a teen girl, on one of her caretakers, behavioral psychiatrist Kathy (Jennifer Jason Leigh, with one eye obscured by a bloody bandage). Much like a detective, Lee meets and assesses the other members of this seven-member family-like collective who are responsible for Morgan’s “birth” five years ago and monitoring her rapid growth. The close-knit crew all treat Morgan—who continues to evolve both physically and mentally—as if they were proud parents reveling in their magical child’s achievements rather than objective observers of an unknown and potentially dangerous quantity.

Kathy even takes the blame for upsetting this nature-loving experimental being, since she told Morgan that she was basically grounded in her glass-enclosed bunker of a room. Lee counters this argument in no uncertain terms, “She is an ‘it.’ And ‘it’ has no rights.”

Even before Lee speaks to the rest of Morgan’s emotionally-invested handlers—the chief scientist in charge (Toby Jones), a doctor who Morgan refers to as “mother” (Michelle Yeoh), the soft-hearted psychoanalyst (Rose Leslie) who introduced Morgan to the great outdoors, the project’s hunky cook (Boyd Holbrook) and three other staffers—she appears ready to pull the plug on Morgan. Meeting her face-to-face through protective glass doesn’t change her mind.

When an outside shrink arrives and demands to enter Morgan’s space without protection to better determine whether she is malfunctioning, it is all but certain that the session is not going to end well once Morgan begins to taunt him about his unhappy personal life. That he is played by Paul Giamatti, who specializes in roles that require blowing one’s stack, means his very presence is like tossing a stick of lit dynamite into a building already engulfed in flames.

My diagnosis of why “Morgan” malfunctions as a chilling plunge into blood-splattered mayhem is that, before the midway point, it is pretty obvious what the eventual outcome and supposed big reveal will be. This is not the fault of the actors necessarily—there are highly respected talents involved here. It is just that we have seen most of this unfold before.

What does work is Morgan herself—or, rather, itself. If you overlook the overdone pasty sheen of her face and the obvious ghoulish lipstick on her lips, Anya Taylor-Joy—the star of this year’s truly creepy “The Witch”—imbues her character with an intriguing newborn-like aura, a calm if unsettling speech pattern and a tendency to explode into a terrifying fury within seconds Then there are her alien reptile eyes, peering into the naked psyches of those who dare confront her. Basically, if you end up liking “Morgan,” it will probably be because of Taylor-Joy.

I do have to get one small peeve off my chest. It seemed odd that the younger Scott decided to focus his camera on Lee’s New York license plate for so long during her arrival. It felt as if he were trying awfully hard to convince us that we were upstate somewhere in the wilds. Sure enough, “Morgan” was shot in Northern Ireland. I can spot blarney when I see it. 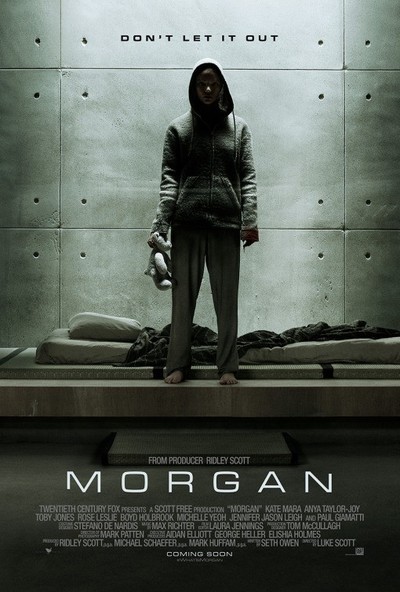 Rated R for brutal violence, and some language.