The problem with gruesome true stores is that, if the outcome is known, a film needs to work well enough for you to patiently wait for it to get to the climactic re-enactment of the crime. “Mope” does not garner enough interest in either a storytelling or visual regard. It’s stuck in an endless loop in both situations; most of it is shot in the same dull array of tight close-ups while its leads repeat the same behavior over and over. Driver is determined to be the biggest adult film actor in history, something he repeats ad nauseam as if the mere repetition of the words will make it so. Dong follows along, hypnotized by this fantasy despite realizing he is even worse at the job than Driver is. Stewart-Jarrett’s commitment to this one note of increasing delusion is commendable, but it’s ultimately ineffective because that’s all he’s been given on the page. There’s no entry point for Driver, so we’re never allowed to identify with nor understand his Werner Herzog-movie level determination. The movie seems disgusted by him until it depicts the turning point that will lead to the murder. Then, its last-ditch grasp for empathy is corrupted by making Tom Dong into a villain.

I was unsure of how “Mope” was being pitched to me tonally, so I must defer to the press materials that classify this as “a dark comedy.” I assume that the intention was along the lines of other films about people seeking fame and fortune well above their talents, movies like Martin Scorsese’s “The King of Comedy” and Michael Bay’s “Pain and Gain.” “Mope” isn’t remotely funny, and its supposed jokes harbor on cruelty and racial typecasting. Driver’s bad hygiene is constantly referred to and mocked (though never explained) and Dong is a hornet’s nest of Asian stereotypes—he’s docile, good at computers and someone refers to a scene where his titular body part is used as a hot dog by saying “you don’t put a three-inch penis into an eight-inch bun.” Even when the race issues are addressed, they’re done poorly. A scene with David Arquette as a porn director forcing them to enact the most blatantly racist tropes for his movie plays more like an indictment of “Mope” than of Arquette’s character.

Only Brian Huskey strikes the right level of absurdity and sleaze here. As Eric, the CEO of Ultima DVD and an occasional performer himself, he’s an uncomfortably smarmy boss who, to his credit, is willing to engage in the fetishes that drive business to his brand. An early moment finds him demonstrating to Driver and Dong a commonly requested scene where an actress dressed as a cheerleader repeatedly kicks him in his naked genitals. He then has the duo recreate the scene for an upcoming movie. As kung-fu movie sound effects accompany each ruthless kick to the actors’ junk, Eric explains how to master—and enjoy—this brutality for the sake of art. Had Heyne stuck to the balance of revulsion and warped affection of this scene, “Mope” might have achieved its dark comedy goals.

Unfortunately, “Mope” is so disgusted by its characters that it never sees their humanity. At least Scorsese's Rupert Pupkin got to do a decent set of stand-up (whether it’s real or not is debatable) and Bay found some identification with his hapless pumped-up anti-heroes. This movie needed the touch of John Waters, a filmmaker whose characters were often reprehensible people doing vile things, but you always knew their creator’s sympathies were with them. That’s not the case here, so when the murder finally occurs, the only feeling is the relief that the movie’s almost over. 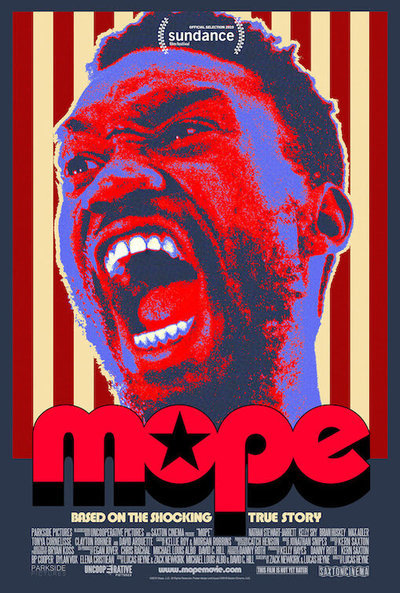