These toys may be traumatized for eternity

The first two "Toy Story" movies centered on the relationship between a boy and his toys. In Disney/Pixar's "Toy Story 3," Andy has grown to college age and the story leaves the toys pretty much on their own. In a third act where they find themselves fighting for life on a conveyor belt to a garbage incinerator, we fear it could be renamed "Toy Story Triage."

The problems all begin with that most dreaded of commands, “Clean out your room!” No mother in history understands that a boy's room has all of his stuff exactly where he needs it, even if he dumped it there 10 years earlier. Andy's mom gives him three choices: (1) attic; (2) donation to a day-care center; (3) trash. As Andy examines his old toys, his gaze lingers fondly on Woody (voice of Tom Hanks), and he decides to take him along to college.

What with one thing and another, the other toys find themselves at the day-care center, which they think they'll like, because there will be plenty of kids to play with them all day long. There seems to be relatively little grieving about the loss of Andy's affections; he did, after all, sentence them to a toy box for years, and toys by nature are self-centered and want to be played with.

Day care seems like a happy choice, until a dark underside of its toy society emerges in the person of an ominously hug-prone bear named Lotso (Ned Beatty). They pick up, however, some additions to their little band, including a Ken doll with an extensive wardrobe. If you ask me, Barbie (Jodi Benson) is anorexic, and Ken (Michael Keaton) is gay, but nobody in the movie knows this, so I'm just sayin'.

Buzz Lightyear (Tim Allen) is back, still in hapless hero mode, but after a reboot, he starts speaking Spanish and that leads to some funny stuff. I also enjoyed the plight of Mrs. Potato Head (Estelle Harris), whose missing eye continues to see independently of her head. This raises intriguing physiological questions, such as, if Mr. Potato Head lost an ear, would it continue to hear, or if he lost a mouth, would it continue to eat without a body? These are not academic questions; at one point, Mister becomes an uncooked taco shell. Mr. and Mrs. Potato Head must be old hands at such situations, because children spend most of their time attaching his body parts in the wrong way, like malpracticing little Dr. Frankensteins.

Man, the toys have a dangerous time of it after they eventually find themselves at a garbage collection center. You have no idea what garbage has to go through before becoming landfill, and even an Indiana Jones toy would have trouble surviving the rotating blades. There is a happy ending, of course, but I suspect these toys may be traumatized for eternity.

This is a jolly, slapstick comedy, lacking the almost eerie humanity that infused the earlier “Toy Story” sagas, and happier with action and jokes than with characters and emotions. But hey, what can you expect from a movie named "Toy Story 3," especially with the humans mostly offstage? I expect its target audience will love it, and at the box office, it may take right up where "How to Train Your Dragon" left off. Just don't get me started about the 3-D. 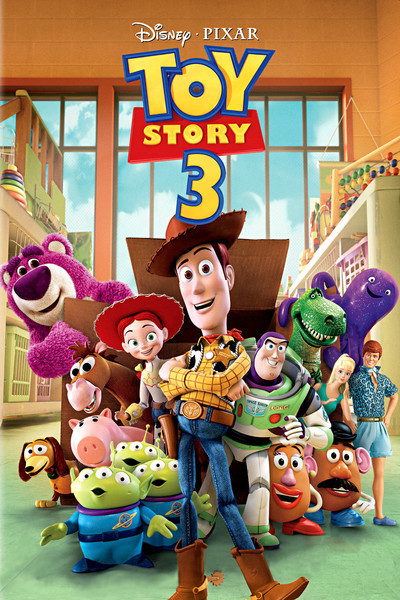