Molly Bloom hustles and jostles. She sizzles and dazzles, and whatever room she’s in, she’s totally in command—that is, until she isn’t. Even then, though, she’s irrepressibly verbal—able to articulate everything, all the time, in ways that are far quicker and cleverer than the average human ever could.

In other words, Molly Bloom is an Aaron Sorkin character, even though she’s a real person with a really extraordinary tale to tell: The “Poker Princess” made a fortune running high-stakes games for the wealthy and powerful. And “Molly’s Game” marks the directorial debut of the writer of “The West Wing,” “The Social Network” and “A Few Good Men,” among many others. (He’s working from his own screenplay, of course.) So if you’re a fan of his particular brand of impossibly intelligent characters exchanging rat-a-tat dialogue, you’ll be in heaven here. The hose is on full blast for two-plus hours. Nothing and no one seems to be holding him back, for better and for worse.

And in Jessica Chastain, Sorkin has found the perfect match for his densely witty repartee. As she’s proven throughout her career—particularly in “Zero Dark Thirty” and “Miss Sloane”—Chastain has the presence, smarts and dexterity to take this kind of tricky material and make it sing. Despite her cynical, detached demeanor, she’s a force of nature in a blowout and a bandage dress—impossible to stop watching and listening to as she narrates giant chunks of “Molly’s Game” in wryly humorous fashion.

Sorkin’s film is a bit overlong but it mostly moves briskly, especially off the top, as Molly informs us in a lengthy voiceover about her past as an Olympic-caliber skier and the freak accident that drastically changed her life trajectory. Reminiscent of the variety of ways Adam McKay presented complicated information in “The Big Short,” Sorkin plays with images and graphics, grabbing us with high energy from the very start.

Inspired by Bloom’s memoir of the same name, “Molly’s Game” bounces back and forth in time between Molly’s arrest by the FBI for running an illegal gambling operation and her efforts to persuade a New York lawyer (an excellent Idris Elba) to represent her and flashbacks to how she built her glittering empire. Sorkin also goes ever further back to Molly’s youth, when she showed early traces of her independent, rebellious streak by sassing her demanding psychologist dad (a stern Kevin Costner). (As the teenage Molly, Samantha Isler matches up beautifully with Chastain’s voice and demeanor.)

To prove her worth and distance herself from the competition of her overachieving brothers, Molly moved to Los Angeles rather than going to law school as she’d originally planned. There she stumbled into organizing a weekly, underground poker game for a would-be Hollywood player (Jeremy Strong) at the “Cobra Lounge”—a stand-in for the Sunset Strip’s infamous Viper Room. Sorkin lets us learn the game right along with Molly—the terminology, the strategy, the psychology. (I’m not a poker expert in the slightest, but people who are tell me “Molly’s Game” gets it right.) A quick study, Molly wrests the game away from him in no time and ups the ante (literally and figuratively) as she glamorously makes it her own. Her transformation is dizzying but Chastain’s confident, grounded nature makes it work.

In a rare villainous role, Michael Cera is chilling as a famous actor known as “Player X” (but supposedly based on Tobey Maguire), one of Molly’s earliest regulars who’s more interested in destroying the competition than winning millions for himself. On the other end of the spectrum is a devastating Bill Camp as a decent guy and a strong player who endures a whirlwind series of days in Molly’s high-end hotel suite poker room.

But the throughline for all these anecdotes is the strengthening relationship between Molly and her lawyer, the only other person who can consistently match her in the rapid-fire dialogue department. Chastain and Elba have crackling chemistry from the start—you can practically feel the energy of them leaning into each other. Either you’ll be able to give yourself over to Sorkin’s heightened world or you won’t, but the scenes between Chastain and Elba certainly make it easier.

Which makes it all the more jarring and unfortunate that both he and Costner’s character end up explaining Molly to Molly when she’s at her lowest point. The scene with Costner is particularly contrived; the redemption it depicts is intended as a much-needed moment of catharsis, but it ends up feeling like smug mansplaining.

Ever the fierce competitor, Molly has found a way to rule in a male-dominated world. If only “Molly’s Game” had let her win in the end on her own fascinating, complicated terms. 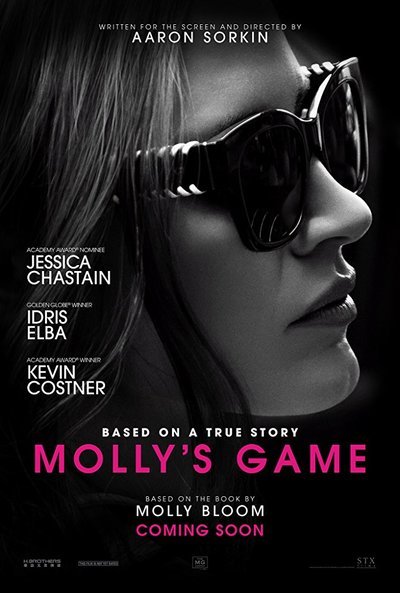 Rated R for language, drug content and some violence.