Legend has it that the term "lobbyist" originated during the presidency of Ulysses S. Grant, who referred to the petitioners bombarding him with requests for support as "lobbyists" because they always ambushed him while he was trying to relax with a brandy in the lobby of the Willard Hotel in Washington. The DC Mythbusting Series has debunked that story, finding the term in use as far back as the 1600s (always with the same wheeler-dealer connotation). Whatever the case may be, "lobbyists" are still with us, and who or what they represent is often cloaked in mystery, making them potent fodder for conspiracy theorists and paranoid political thrillers. One particular lobbyist—a ferocious take-no-prisoners individual named Elizabeth Sloane, played by Academy Award nominee Jessica Chastain—is the center of John Madden's "Miss Sloane."

With a script by first-timer (and it shows) Jonathan Perera, "Miss Sloane" charts the course of a woman who works for a conservative lobbying firm, but jumps ship after being asked by her scowling-eyebrow-ed boss (Sam Waterston) to support the powerful gun lobby in their opposition to a new gun law featuring regulatory checks on the purchase of firearms. Sloane takes her entire team with her, sans one—her devoted assistant Jane (Alison Pill) who decides to stay behind—to a rag-tag low-rent lobbying outfit headed up by Rodolfo Schmidt (Mark Strong), devoted to pushing through that controversial gun bill.

To say Miss Sloane is a ruthless lobbyist does not even begin to cover it. She is the Keyser Söze of lobbyists. She is the Bobby Fischer of lobbyists, going up against grade-schoolers playing checkers. She is every mastermind serial killer on "Criminal Minds," psychopaths with the wherewithal to pepper their crime scenes with 75 red herrings, baffling organizations following the blood trail. While there is a satisfaction in the spectacle of a Lone Wolf outsmarting the fat cats in Washington, and while the character of Miss Sloane is given fascinating and bizarre depths (unexplained for the most part, a welcome change), "Miss Sloane" plays like a naive fantasy (perhaps its release date has something to do with that).

Miss Sloane's political convictions are unknown. She is not an idealist or an activist. She does not have any convictions outside of winning (a philosophy she verbalizes multiple times throughout, including in the direct-address opening scene). She will do anything—anything—to win. Her colleagues are thrown under the bus, used, lied to, betrayed. This aspect of the story is refreshing, making "Miss Sloane" more of a character study than anything else. It is the character study aspect of the film that is most interesting.

Her personal life is nonexistent. She pops pills in secret, presumably speed since she never sleeps. She is awkward in everyday human interaction. Her friendship with underling Esme Manucharian (an excellent Gugu Mbatha-Raw) has a disturbing power-imbalance from the start. There are many shots (too many) of people turning to one another with expressions of, "Is this lady for real?" We get the point: she's outside-of-the-box, she's brilliant, she's scary. At one point, Schmidt—who poached her from her old firm—asks her point-blank: "Were you ever normal? What were you like as a child?"

The action switches back and forth between Senate hearings investigating Miss Sloane's unorthodox and perhaps illegal dealings and the events that led her to that point. Perera's awkward script makes it abundantly clear just how difficult it is to pull off Aaron Sorkin-esque dialogue, the rat-a-tat-tat of "The West Wing" or "The Social Network," featuring people wholly fluent in complex "insider" language. It's challenging to write and it's challenging for actors to deliver. The dialogue in "Miss Sloane" is stilted in the extreme ("My bank account and liberal conscience won't justify owning a car"), in particular in the group scenes, where the "banter" never lifts off the page.

Chastain is a naturally emotional actress: in her nearly-wordless performance in "The Tree of Life" she is so alive onscreen you can practically see the pulse beating in her wrists. Miss Sloane is not that kind of character. Chastain is a pleasure to look at, in her dizzyingly high heels, ice-white skin and bright red lips. Madden and cinematographer Sebastian Blenkov—fresh off of "Men & Chicken"—do right by their star, lighting her and framing her in the most dramatic way possible, reveling in her coloring, her striking silhouette, getting as close as possible to her to examine the flashes of expression in this strange character's eyes. But she wears the character of Miss Sloane like a costume. There's a flatline quality to Chastain's voice in this role (not heard in her other performances) that makes the dialogue sound even more over-written; there’s no range, no prosody.

When "Miss Sloane" really works is in the scenes when Miss Sloane is by herself (not coincidentally, the scenes with very little dialogue). The relationship between Miss Sloane and Esme is fascinating: the repeat scenes where they suss each other out and form a wary bond are filled with dramatic tension. Jake Lacy, who continues to surprise with his diversity of character roles, is riveting as the only character who treats Miss Sloane like a human being and—in a beautiful irony—one of the only characters in the entire film with a moral compass. Their scenes together are extremely well-played and well-written, pointing out the deficiencies of the script elsewhere.

The biggest problem is not the film's fault. Opening as it does two weeks after the ugliest election in U.S. history (although the election of 1800 would give it—and any other—a run for its money in that regard), "Miss Sloane" feels almost quaint now, even with its ends-justify-the-means cynicism, even with its vision of life on The Hill as a ruthless battle to win at all costs. The film is not so much tone-deaf as old-fashioned, emerging from a more innocent time (say, three weeks ago) when "politics as usual" actually had some meaning. 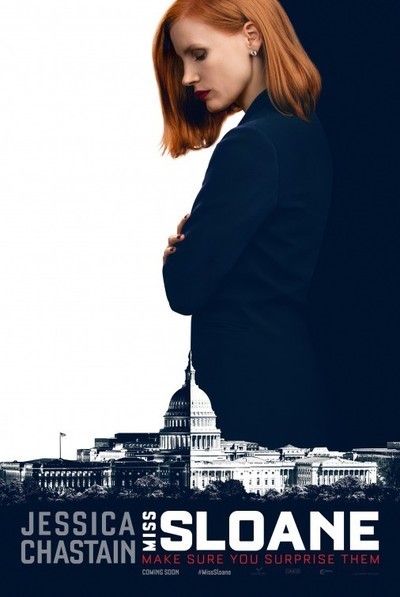