There’s a moment right at the beginning of the earnest new documentary, “Mighty Ira,” that tells us more about its titular subject than much of what follows. Ira Glasser, the noted champion of racial justice who served for 23 years as Executive Director of the American Civil Liberties Union, visits the spot in Brooklyn where the revered cathedral of his youth once stood. The only lasting evidence that this block—now occupied by apartment complexes—used to be the location of the Brooklyn Dodgers’ stadium Ebbets Field is a plaque commemorating the landmark moment when Jackie Robinson integrated the sport in 1947. Though New York City was often referred to as a melting pot, Glasser knew it more as “a collection of insular segregated tribes.” That’s what made his experiences of cheering alongside Black baseball fans at Ebbets Field all the more of a profound and euphoric anomaly. When two young girls passing by the camera ask the documentary crew what they’re filming, Glasser happily responds, savoring their gradual realization of the site’s historic significance, which causes their eyes to light up.

Glasser’s life is chockfull of fascinating stories that he’s pleased to share with anyone who might benefit from them, and that includes this film’s trio of young directors, Chris Maltby, Nico Perrino and Aaron Reese. Their debut feature, “Mighty Ira,” is structured as a series of vignettes that, while worthwhile, never coalesce into a fully dimensional portrait of Glasser himself, nor a narrative that satisfies on its own terms. Eli B. Despres, Josh Kriegman and Elyse Steinberg’s excellent documentary, “The Fight,” from earlier this year, was granted unprecedented access into the ACLU’s headquarters, and was therefore able to provide a far richer look at the diverse array of cases taken on by the nonprofit organization. Not only does “Mighty Ira” reduce the ACLU’s century of trailblazing litigations to literal bullet points, it also frequently allows its own subject to get lost in the shuffle. So preoccupied does the film become with the notorious case of Frank Collin, the Illinois Nazi who asked the ACLU to defend his right to hold a rally in the Chicago suburb of Skokie in the late ’70s, that it could’ve easily been titled “Whiny Frank.” The most emotionally impactful footage is reserved for Ben Stern, a concentration camp survivor and Skokie resident whose entire family was killed in the Holocaust.

The fact that Stern and Glasser ultimately became close friends is a testament to the latter man’s gift for listening to and respecting the views of those staunchly seated across the aisle from him. Perhaps the most purely enjoyable segment in the film details Glasser’s unlikely friendship with conservative pundit William F. Buckley, who relished the opportunity to debate the ACLU director on his show, “Firing Line.” Their mutual appreciation of intelligent discourse transcended their political affiliations, prompting them to find worth in one another’s viewpoints. Watching Buckley join Glasser in taking the subway to a baseball game, one can’t help being reminded of the many operas merrily attended by Ruth Bader Ginsburg and her fellow Supreme Court Justice Antonin Scalia, to whom she was diametrically opposed on almost every other topic. In a disarmingly humanistic interview excerpt, Buckley says that when he’s asked what “groups” he favors in society, his response is, “I like my friends,” because it cuts through the categorical qualifications typically used to divide us.

Each chapter in the film is diverting on its own, but they often prove to be jarring when juxtaposed against one another, as the focus continuously shifts back to the ACLU’s controversial support of the Nazis’ right to hold their march in Skokie. Glasser firmly believed that by enabling governments to block speech they didn’t deem acceptable, that judgment would quickly extend to the progressive activism that his organization had championed from its inception. The insurance bond forced upon the Nazis to post in order to hold their rally could easily be imposed on any group, including the MLK Coalition that routinely marched through Marquette Park, the area located on Chicago’s southwest side that Collin was actually set on utilizing rather than the suburbs. During Glasser’s appearance on an episode of “Donahue,” a white audience member chastises him for supporting speech that conflicts with the preservation of “peaceful tranquility.” Glasser counters with the notion that civil rights marches could also be considered a disruption of that very tranquility, while a white supremacist seated next to him claims that if everyone had only listened to him, their tranquility would’ve been assured. The end coda to this story takes the form of an inevitable downward spiral: after winning their right in the courts to march in Skokie, Collin’s puny group of Nazis held their rally in Marquette Park instead, where the massive counter-protest coupled with rigorous police protection caused their racist vitriol to be swiftly drowned out, ultimately rendering them a punchline in “The Blues Brothers.” Collin, whose own father was Jewish, was removed from his post a year later after being sentenced to jail on charges of child molestation.

What “Mighty Ira” never sufficiently addresses is the fact that enabling hate speech as part of free speech has entirely different repercussions at a time when white supremacists have an advocate in the White House who instructs the Proud Boys to “stand by” during a presidential debate. The carnage wrought by the white supremacists’ vile Charlottesville demonstration in 2017, leading to the murder of counter-protestor Heather Heyer, is squarely a result—according to the ACLU—of the local police and government failing to provide sufficient protection for demonstrators. Yet with democracy on the brink of extinction in the United States, the ACLU is faced with the daunting challenge of how to ensure its own survival in the years ahead. Alas, this film is so unfocused that it can’t even provide solid context as to how Glasser helped the ACLU grow from a “small mom and pop operation” into a national organization. All we get are fragmented stories, such as how Bobby Kennedy encouraged Glasser to take his initial job as Associate Director of the New York Civil Liberties Union in 1967, a year before Kennedy was assassinated. I treasured the time I got to spend with Glasser in this picture, yet it feels more like the prelude to a more textured and rewarding conversation that has yet to be filmed. 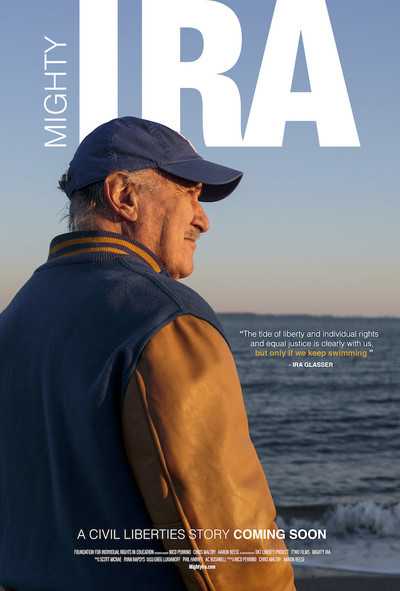