This is some weird movie. There's never been anything that looked quite like it; was it dreamed up in a junkyard? It stars John Belushi and Dan Aykroyd as the Blues Brothers, Jake and Elwood, characters who were created on "Saturday Night Live" and took on a fearsome life of their own. The movie tells us something of their backgrounds: They were reared in a sadistic West Side orphanage, learned the blues by osmosis, and, as the movie opens, have teamed up again after Jake's release from the Joliet pen.

The movie's plot is a simple one, to put it mildly. The brothers visit their old orphanage, learn that its future is in jeopardy because of five thousand dollars due in back taxes, and determine to raise the money by getting their old band together and putting on a show. Their odyssey takes them to several sleazy Chicago locations, including a Van Buren flophouse, Maxwell Street, and lower Wacker Drive. They find their old friends in unlikely places, like a restaurant run by Aretha Franklin, a music shop run by Ray Charles, and a gospel church run by James Brown.

Their adventures include run-ins with suburban cops, good ol' boys, and Nazis who are trying to stage a demonstration. One of the intriguing things about this movie is the way it borrows so freely and literally from news events. The plot develops into a sort of musical Mad Mad Mad Mad World, with the Blues Brothers being pursued at the same time by avenging cops, Nazis, and an enraged country and western band led by Charles Napier, that character actor with the smile like Jaws. The chase is interrupted from time to time for musical numbers, which are mostly very good and filled with high-powered energy.

Aretha Franklin occupies one of the movie's best scenes, in her South Side soul food restaurant. Cab Calloway, as a sort of road manager for the Blues Brothers, struts through a wonderful old-style production of Minnie the Moocher. The Brothers themselves star in several improbable numbers; the funniest has the band playing in a country and western bar where wire mesh has been installed to protect the band from beer bottles thrown by the customers.

I was saying the musical numbers interrupt the chases. The fact is, the whole movie is a chase, with Jake and Elwood piloting a used police car that seems, as it hurdles across suspension bridges from one side to the other, to have a life of its own. There can rarely have been a movie that made so free with its locations as this one. There are incredible, sensational chase sequences under the elevated train tracks, on overpasses, in subway tunnels under the Loop, and literally through Daley Center. One crash in particular, a pileup involving maybe a dozen police cars, has to be seen to be believed: I've never seen stunt coordination like this before.

What's a little startling about this movie is that all of this works. The Blues Brothers cost untold millions of dollars and kept threatening to grow completely out of control. But director John Landis (of “Animal House”) has somehow pulled it together, with a good deal of help from the strongly defined personalities of the title characters. Belushi and Aykroyd come over as hard-boiled city guys, total cynics with a world-view of sublime simplicity, and that all fits perfectly with the movie's other parts. There's even room, in the midst of the carnage and mayhem, for a surprising amount of grace, humor, and whimsy. 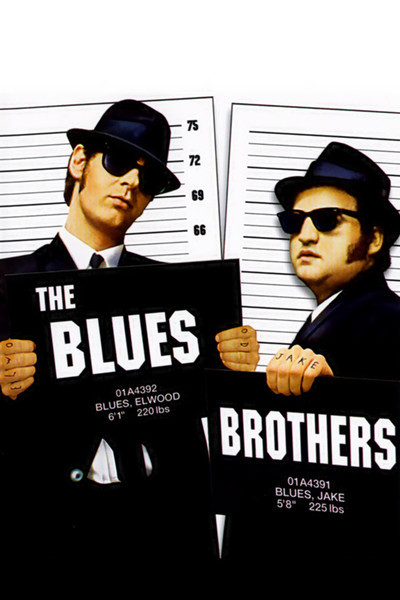