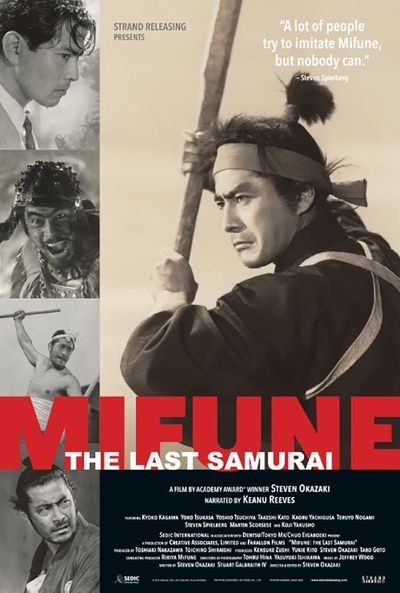 The word “legend” is one that is arguably thrown around too often in any context, but it’s no stretch at all to call Japanese movie star Toshiro Mifune “legendary.” Or “iconic” for that matter. The star of some of the greatest films ever made—never mind nation or genre, just GREATEST FILMS EVER MADE—the man was an exacting, electrifying performer. In documenting and celebrating his life and his films, you’d have to go very far wrong indeed to come out of the effort with something bad or uninteresting.

That said, “Mifune: The Last Samurai,” a documentary on the actor directed by Steven Okazaki and narrated by Keanu Reeves (the script is by Okazaki and Stuart Galbraith IV) got off on a somewhat bad foot for me. Explaining Mifune’s place in the firmament of pop culture, the narration says of his collaborations with director Akira Kurosawa, “without them there would have been no ‘Magnificent Seven.’” This is factually true but seems to me to throw out a very crucial baby with the bathwater. What makes Kurosawa and Mifune crucial is that without them there would be no “Seven Samurai.”

But the fact of the matter is that I’m not the “key demo” for this movie. “Mifune: The Last Samurai” wasn’t made for fans like me. Although fans like me will likely be the first in line to see it. After explaining Mifune’s importance, the movie lays out a brief history of Japanese cinema, the “chanbara” (swordplay) movie in particular. Only then does it get to Mifune’s fascinating life: Born in 1920 to parents who set up business in China, he only sets foot in Japan at age 20, to fight in World War II. That experience was traumatic, but not in a conventional way. Harboring no ambitions to act, he tries to follow a bit in his photographer father’s footsteps by apprenticing as a camera assistant at a film studio. His good looks, simultaneously rugged and smooth get him noticed, and so…

What the movie is very good at revealing and expanding upon is how this reluctant actor became such a masterful one. In part it was due to his presence. “He’s not an actor who blends into the background,” one of his surviving colleagues notes. In part it was due to what his life experience taught him. His experience made him determined, one interviewee notes, to “never again be the kind of person who bends to authority.” But it was also, eventually, his devotion and his research. His frequent costar and friend Yoshio Tsuchiya notes “The one word I would use to describe Mifune is ‘perseverance’!”

Mifune put himself through a lot. He was a heavy drinker whose alcohol abuse ended up affecting his family life. His oldest son nevertheless remembers his father’s great “compassion.” The movie concentrates mostly on Mifune’s collaboration with Kurosawa, which yielded great pictures such as the groundbreaking “Rashomon,” “Samurai,” “The Hidden Fortress,” “Yojimbo,” and “Red Beard.” While it does not dig deep on what ended their collaboration (Martin Scorsese, also known as a director with a compelling long-term relationship with a single actor, now dormant, offers some fascinating rumination on the subject), its account of a sort of long-distance reconciliation is very moving.

The movie’s clips are thrilling, and apt. While I commend “Mifune: The Last Samurai” for its briskness, and its occasional crowd-pleasing playfulness—as when it introduces viewers to the actor who put on the rubber suit to play Godzilla the same year he was a samurai in Kurosawa’s classic—it’s a movie I myself could have stood to see more of. Fascinating Mifune/Kurosawa collaborations such as “Stray Dog” and “The Idiot” are given short shrift if mentioned at all. When going into Mifune’s international career, his role in “Hell In The Pacific,” in which he goes one-on-one with another icon/legend, Lee Marvin, is given the briefest of mentions. Last I looked, that movie’s director John Boorman is both alive and as voluble as ever. And so on. Again, these quibbles arise from the fact that this is a beginner’s guide, not a fest for fans. Is it too much to expect an expanded DVD edition though?