When he came home to the United States after his second tour in Vietnam, Ronnie "Stray Dog" Hall discovered that he wasn't wanted here, so he did an 11-year tour in Korea, where he was shocked to discover that everyone liked him. He started a family and returned to the U.S. After some years, he left his wife, married another woman and now realizes that he's bored with the United States. His reasons are understandable: becoming accustomed to travel, experiencing different cultures and having to put up with those damn politicians, man.

"Stray Dog," the first foray into documentary filmmaking for director Debra Granik, follows Hall in his day-to-day life. The film begins as if at the end of an ellipsis and ends with one, too. We learn what shaped him through the course of the film, and by the end, we imagine that he's going to have to make a few more adjustments—that some of his plans are going to be put on hold indefinitely.

Hall is a stubborn man but not in an authoritarian way. He tries to explain what being a parent will be like to his granddaughter—how she'll have to shape and mold her child, how he doesn't want to see her living off welfare, how she has to remember that, while she may not be important to the world at large, she will be of the utmost importance to her son. We get a glimpse of the stern but caring authority figure in Hall's scenes with her, but then she asks if he'll build a rocking horse for his great-grandson. Granik doesn't show Hall's face, because it's not part of the one-camera coverage in the scene, but she does capture the audio of his response with utter clarity. The man melts. There's no other way to describe the tone of his voice when he says he will. We can hear the pride, the humility and, above all else, the love.

There are always a few questions in the back of one's mind while watching a documentary of this style, whether one wants to call it vérité or Direct Cinema, in which the camera is present as the subjects go about their everyday lives without acknowledging the camera's presence. One question, of course, is how much the mere presence of the camera affects how the subjects behave. Another is whether or not the filmmakers prod their subjects to elicit a certain response, and yet another is to what degree the footage is shaped in the editing process.

All of these questions boil down to the most important one: Is the film honest? Hall's response to his granddaughter's question about the rocking horse pretty much answers that question in the affirmative. If she had wanted to, Granik could have found a way for us to see his reaction, but she doesn't. She knows not only that it would be "cheating" but also that it's unnecessary. That was Hall's reaction in that moment, and that is the way she and her crew captured it. The scene is affecting because we know it's authentic, and we know it's authentic because of what Granik doesn't do.

There are no voice-overs in the film. No one sits and talks to the camera. There are no reenactments of Hall's past. Granik watches this man, listens to him and others as they talk about what's happening and what has happened, and trusts that these moments of routine will tell us everything we need to know.

We learn more than enough about Hall over the course of the film, and all of it points to a decent, good-hearted man who has overcome a lot of pain and torment but still knows that there are demons he will never defeat. We see him talking with his psychiatrist, as he recalls how he was a young guy—"too young," he says—in a leadership position in Vietnam.

He did things for which he will never forgive himself. He lost friends in battle. Upon returning home, Hall was angry at himself and the world for being in a war that he doesn't think was necessary, but he knows that anger is a waste of time. He tries to explain that to other veterans as he rides his motorcycle—along with a parade of other vets—from his home in southern Missouri to the Vietnam Veterans Memorial in Washington, D.C. The veterans of more recent conflicts know all about post-traumatic stress disorder, but he and other veterans of his generation didn't. He spends a lot of time at memorials and funerals.

We see him with his second wife Alicia, an immigrant from Mexico whose two sons are still living there. She wants her sons to come to the U.S. (When they do, the film shifts focus to the family adjusting to the arrangement and loses some of its potency). Hall has dreams of retiring in Mexico. He runs an RV park and is quite lenient on the tenants' rent payments. Most of them are veterans, too, and struggling. One of Hall's buddies has to decide between paying to have his back teeth pulled or to get dentures. He goes with the latter option and gets to work with a string to solve the first problem.

The film takes a hard, firsthand look at the failings of government toward those who have fought for the United States, but it finds abundant hope in veterans like Hall and the community that they've formed. He and his friends guide a woman who lost her daughter and grandson in two different conflicts toward a support group, and when her water heater leaks, they replace her floor.

"Stray Dog" largely succeeds because Granik's technique complements her subject. Both he and the film are modest in their goals and cherish the value of honesty. 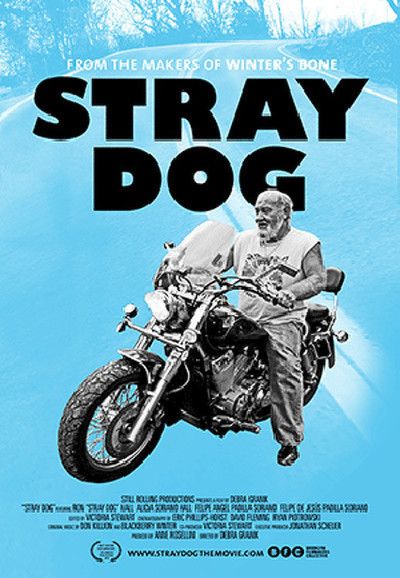 Ronnie Hall as Himself - Stray Dog