You think you seen Bug-Eyed Monsters? You ain't seen nothing yet.

"Men in Black 3” comes 15 years after the entertaining original and 10 years after the sequel laid an egg, and the surprise is, it's better than the first one. Given the passage of time, the entire concept may be new to some audience members, but it still does service: There is a secret agency assigned to keeping track of all aliens on Earth, and there are as many of them as makeup expert Rick Baker can possibly devise. I am not sure how undercover an MiB agent can be when he dresses exactly like the Blues Brothers, but never mind, they get the job done.

The story until now: Veteran Agent K (Tommy Lee Jones) and his younger recruit Agent J (Will Smith) are under the supervision of Agent O (Emma Thompson) when there's an emergency. The hideously ugly alien Boris the Animal (Jemaine Clement) has escaped from a maximum security prison on the moon. He is the last surviving member of his race, still angry because Agent K shot off one of his arms. His plan: Travel back in time and kill Agent K before that can happen.

An arm like his, you don't want to lose. Its palm apparently serves as a condo for a nasty little insectoid creature that will leap and take chunks out of you. Indeed, Boris is one of those aliens whose entire body seems to contain openings from which unappetizing things can forage on its victims.

Time travel can become very complicated. To make it simple: Agent J (Will Smith, you remember) tries to travel back in time to prevent Boris the Animal from killing K. This results in a Young K existing in the same time period as J, who is the same age he started as, so the old man and the rookie are now contemporaries.

How this is achieved is the movie's most impressive achievement. Young Agent K is played, not by Tommy Lee Jones in prosthetic makeup, but by Josh Brolin. The casting is spot-on. He looks like a young Tommy Lee Jones, and he sounds so uncannily like him that director Barry Sonnenfeld, hearing him, allegedly shed tears of relief. While watching the movie, I was convinced Jones dubbed his own voice. But remember Brolin was also a good sound-alike for George W. Bush in “W.”

Anyway, Agent J travels back to save Agent K, and not content to populate the film with countless gob-smacking aliens from Rick Baker's fertile imagination, Sonnenfeld and his writer, Etan Cohen, also show a Hitchcockian flair for using ironic locations. For reasons I don't understand, in order to return to the "present," it's necessary to fall from a very great height and push a button on a gizmo at the last second. This involves Agent J crawling out on one of those medieval-looking eagles atop the Chrysler building, something you can imagine Hitch assigning Cary Grant to do.

A virtuoso final sequence takes place at Cape Kennedy on the day of the first moon landing attempt. Another gizmo must be placed on the moon to save humanity, and this involves a last-minute attempt to crawl out to the Apollo 11 pilot capsule, slap on the gizmo and escape using one of those chutes provided for the astronauts in case of an emergency. Since the first moon launch was telecast with many TV cameras and scrutinized by countless binoculars, it seems unlikely this would have gone unnoticed. Maybe there's a loophole — like if the attempt succeeds, it changes the future and turns out to be unnecessary.

Whatever. The movie gets comic relief from a sidekick character named Griffin (Michael Stuhlbarg), who wears a knitted Elmer Fudd hat and has the ability to see all the possible variations resulting from various events during time travel. “Uh, oh,” he's always saying, “this is the one where …”

Let me say that although I liked the first “MiB” movie, I wasn't particularly looking forward to this belated sequel. But I had fun. It has an ingenious plot, bizarre monsters, audacious cliff-hanging, and you know what? A closing scene that adds a new and sort of touching dimension to the characters of J and K. 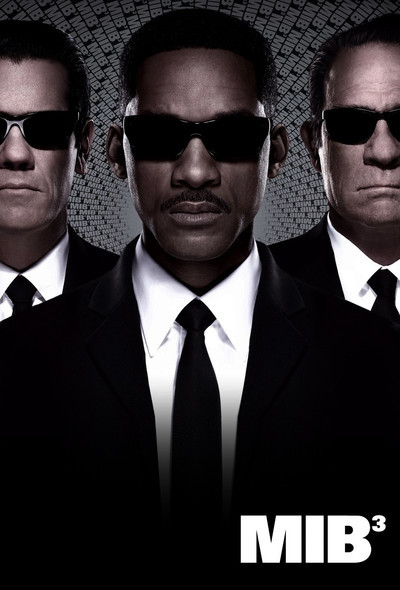 Will Smith as Agent J

Jemaine Clement as Boris the Animal