Martin Scorsese’s “Mean Streets” isn’t so much a gangster movie as a perceptive, sympathetic, finally tragic story about how it is to grow up in a gangster environment. Its characters (like Scorsese himself) have grown up in New York’s Little Italy, and they understand everything about that small slice of human society except how to survive in it.

The two most important characters, Charlie and Johnny Boy, move through the Mafia environment almost because it’s expected of them. Charlie is a Catholic with pathological guilt complexes, but because the mob is the family business, he never quite forces himself to make the connection between right and wrong and what he does. Not that he’s very good at being a Mafioso: He’s twenty-seven, but he still lives at home; he’s a collector for his uncle’s protection racket, but the collections don’t bring in much. If he has any luck at all, he will be able to take over a bankrupt restaurant.

He is, at least fitfully, a realist. Johnny Boy, on the other hand, is a violent, uncontrolled product of romanticized notions of criminal street life. Little Italy is all around him, and yet he seems to have formed his style and borrowed half his vocabulary from the movies. He contains great and ugly passions, and can find no way to release them except in sudden violent bursts. Charlie is in love with Johnny Boy’s cousin, and he also feels a dogged sense of responsibility for Johnny Boy: He goes up on a roof one night when Johnny is shooting out streetlights and talks him down. At least Johnny releases his angers in overt ways. Charlie suppresses everything, and sometimes in desperation passes his hand through a flame and wonders about the fires of hell. He takes his Catholicism literally.

Scorsese places these characters in a perfectly realized world of boredom and small joys, sudden assaults, the possibility of death, and the certainty of mediocrity. He shot some exteriors in Little Italy, where he was born and where he seems to know every nuance of architecture and personality (though most of the movie was shot in Los Angeles), and his story emerges from the daily lives of the characters. They hang out. They go to the movies. They eat, they drink, they get in sudden fights that end as quickly as a summer storm. Scorsese photographs them with fiercely driven visual style.

We never have the sense of a scene being set up and then played out; his characters hurry to their dooms while the camera tries to keep pace. There’s an improvisational feel even in scenes that we know, because of their structure, couldn’t have been improvised.

Scorsese got the same feel in his first feature, “Who’s That Knocking at My Door?” (1967). “Mean Streets” is a sequel, and Scorsese gives us the same leading actor (Harvey Keitel) to assure the continuity. In the earlier film, he was still on the edge of life, of sex, of violence. Now he has been plunged in, and he isn’t equal to the experience. He’s not tough enough to be a Mafia collector (and not strong enough to resist). Johnny Boy is played by Robert De Niro and it’s a marvelous performance, filled with urgency and restless desperation.

The movie’s scenes of violence are especially effective because of the way Scorsese stages them. We don’t get spectacular effects and skillfully choreographed struggles. Instead, there’s something realistically clumsy about the fights in this movie. A scene in a pool hall, in particular, is just right in the way it shows its characters fighting and yet mindful of their suits (possibly the only suits they have). The whole movie feels like life in New York; there are scenes in a sleazy nightclub, on fire escapes, and in bars, and they all feel as if Scorsese has been there. 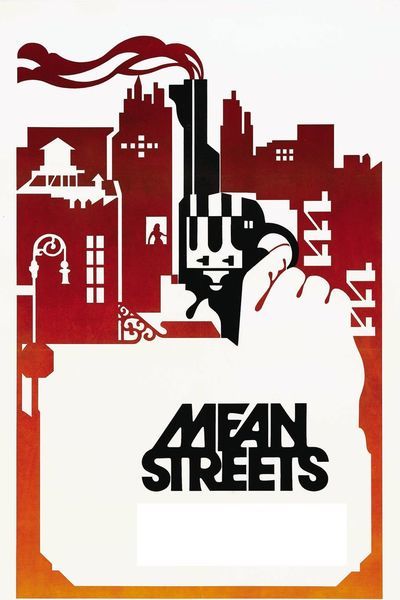