Over the past few years, the stellar British-born actress Sally Hawkins has been working steadily, but it’s been quite a while since she’s gotten a role that allowed her to steer a whole movie the way her critical-breakthrough lead in Mike Leigh’s 2008 “Happy Go Lucky” did. With “Maudie,” she has that and more.

The film begins with a shot of Hawkins, looking old and frail, twisting her body as she dips a brush into a paintbox, and then, with seemingly great difficulty, applying some color to a simple flower design on the wall behind her. The shot brings up a number of questions: what is the character suffering from? Why is she painting flowers on the wall? And so on.

The next scene features Hawkins looking much younger, sitting on a porch, smoking a cigarette. There’s something shocking about the sight, because Hawkins has made herself ever so small, and adopted a posture that suggests stunted growth—there’s something childlike about her that the cigarette throws into sharp relief. From inside the house, she hears two people talking about her, and they refer to her indeed as if she is a child. The “adults” are her brother Charles (Zachary Bennett) and her Aunt Ida (Gabrielle Rose), and Charles is reminding Ida that he’s paying Ida money to look after Hawkins’ Maud. Maud, for her part, only wants to go back to the house that she calls home, and is devastated when Charles tells her that the place has been sold.

“Maudie,” from Irish-born director Aisling Walsh, is a film biography of Maud Lewis, one of the most beloved folk artists of 20th century Canada. The movie, which is made with an artfulness that at times is almost overwhelming, does not play as a standard biopic in any way, however. The viewer never really learns just what Maud’s affliction is until over two-thirds of the way into the film. (Maud Lewis suffered from painful arthritis all her life, stemming from childhood rheumatic fever.) The town in which she lived, married, and made her simple, colorful paintings is not named in an opening title or any such thing. (The setting is Nova Scotia, and the scenery of the film, which was actually partially shot in Ireland and other parts of Canada, is ever-breathtaking.) This film shows instead of tells, and what it shows is sad, disturbing, beautiful, and moving, sometimes all at once.

Tired of the constrictions of Aunt Ida’s home, Maud is apt to wait until all the lights are out in the house, then hobble out and walk to a roadhouse, where she’ll listen to jazz and drink beer and smoke. (The movie opens in the late 1930s.) One day, she’s at a dry-goods store when a gruff, grunting, stocky man walks in and asks the proprietor to write a notice advertising for a maid—the implication is the man himself can’t write. Maud rips the notice right off the wall and follows the fellow back to his house—a shack, more like, guarded by a couple of yappy dogs—to apply for the position, mainly to get out from under Ida’s thumb.

The man is a fishmonger and odd-jobs person named Everett Lewis, and he’s as shut down as Maudie is open. This film fits into a particular kind of sub-genre: the story of two lonely people, societal outcasts, who find comfort and solace with each other. But again, it doesn’t treat this theme conventionally. For one thing, Everett is initially dismissive and downright cruel to Maudie; he frequently behaves unconscionably. The shack is too small for an extra bed even though Maudie is going to be a live-in maid. So the two bundle together on a mattress in what’s more or less an attic, and one night Everett gets a notion, and Maudie tells him a sad story from her past. A sad story that, we later learn, is in large part a lie. Eventually the two do “lie together,” and Maudie insists on marriage. Which Everett eventually capitulates to. This, it turns out, is his way. An orphan himself, he likes to raise hell, in a grumbling way, about anyone who makes a request of him. Then he grants the request, wordlessly. And so it happens that Maudie gets permission to do the thing she loves most, which is to paint. She paints all over the interior of the shack, makes little postcards, starts painting on discarded boards of wood. Eventually Sherry (Kari Matchett), a sophisticated urbanite who summers nearby, takes notice of the work. And Maudie and Everett become famous.

But this is not a story about fame. It’s a love story in which neither of the characters ever utters the three words lovers normally do. It’s a story of pain and difficulty and cold, and also of happiness. “You’re the only one in our family who ended up happy,” Aunt Ida tells Maudie late in the film. Maudie’s happiness, she explains to her quasi-patron Sherry comes from both her way of seeing the world and her joy in depicting it through her eyes and art supplies. “I’m never happier than when I have a brush in front of me.” When she doesn’t have a brush in front of her, she’s a soul both kind-hearted and frank. One of the movie’s funniest moments has her profusely apologizing to a chicken she’s about to kill in order to make stew.

Hawkins’ performance is spectacular, and moving throughout. Ethan Hawke as Everett takes a little more getting used to. His physical acting is always on point, especially considering he’s playing a much thicker type (in every possible sense of the word) than he usually does. But the grunts he emits are initially a little too reminiscent of Billy Bob Thornton’s immortal “Sling Blade” character. But Hawke never tries to ingratiate, never tries to shrug off the more unattractive aspects of the character, and eventually you forget you’re watching Ethan Hawke.

This is a remarkably assured movie, through and through. Walsh and cinematographer Guy Godfree have taken care to make every individual shot a thing of beauty. But the artfulness always acts in service of the emotions, which in the end become both inspiring and heartbreaking. 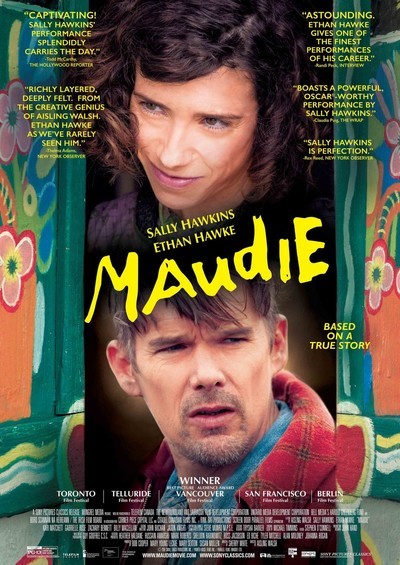 Rated PG-13 for some thematic content and brief sexuality.