Cho Ui-seok’s “Master” drops us into what might be considered second-act material for most films, but this epic has 143 minutes to go and there’s no time for set-up. And so we meet Kim Jae-Myung (Dong-won Gang) deep into his criminal investigation of power player Jin Hyun-Pil (Byung-hun Lee). Kim is an audience member for a speech being given by Jin to his most emotional supporters. Even Jin is moved to tears by the powerful unity he’s created through the One Network, one of the most profitable companies in all of Korea. However, as Kim has discovered through his work in the Financial Crimes Unit, Jin’s empire is built on a pyramid scheme. While Jin preaches to his choir like a cult leader, Kim plans to take him down.

The opening scenes of “Master” promise an intricate, complex crime thriller a la “Infernal Affairs” and “Drug War,” and there are glimpses of that kind of movie buried within this often-talky, bloated flick that’s more often concerned with money laundering than gunfire. The performances are solid to great throughout, and Cho does build to a remarkably satisfying final twenty minutes, but it takes two hours to get there, and much of those 120 minutes are weighed down with overdirected scenes of people planning, negotiating, or staring at computer screens. There’s little that's less thrilling than scenes of people hacking furiously.

One of those hackers is the fascinating Park Jang-gun (Woo-bin Kim), who Captain Kim takes into custody in the film’s opening moments. Park becomes the bridge between Dong-won Gang’s Al Pacino and Byung-hun Lee’s Robert De Niro to, use a “Heat” analogy. As Kim and his team force Park to set Jin up for arrest, this version of Gordon Gekko learns that there’s a mole in his operation. The first hour of “Master” focuses on this dynamic—the informant in the system and the way both sides push and pull at the young man, who may have a plan of his own to come out of this disaster as the ultimate winner. It culminates in a fantastic tunnel sequence, full of twists and turns, and something of an ending at the midway point of the film.

Then “Master” keeps going. For basically the length of an entire new film. Without spoilers, the movie sort of resets and Kim’s operation has to start over again, only with international repercussions. It’s almost like two films in a potential franchise were written, the team decided neither movie could stand on their own, and so they were smashed together. It makes for a somewhat exhausting, undeniably repetitive affair. The second hour of the film goes through many of the same motions as the first, and the characters just aren’t resonant or vibrant enough for us to care. Lee is a great actor (and you really should check out his work in “The Good, the Bad, and the Weird” if you have yet to do so), but he’s not given enough to work with here. However, it’s a testament to his remarkable charisma that he still outshines Gang, who’s somehow even more woefully underwritten. And that’s a not-uncommon problem of these thrillers—the villain is way more interesting than the cop, leaving us to wonder exactly who we should be rooting for.

Perhaps that’s why Woo-bin Kim walks away with so much of the movie. While the good cop and the bad businessman are archetypes in which “Master” cannot find something new to say, Kim’s “man in the middle” is pretty fascinating, and this young actor grounds the entire film. He’s easily the most interesting character, the one with shifting morals and an uncertain future.

And despite my issues with the bloated midsection of “Master,” the final twenty minutes almost justify the lengthy journey. Cho finally delivers in these scenes, twisting and turning his plot, while also giving us the car chases and gunfire we’ve been waiting for. The only question is if you’ll still be awake by the time he gets there. 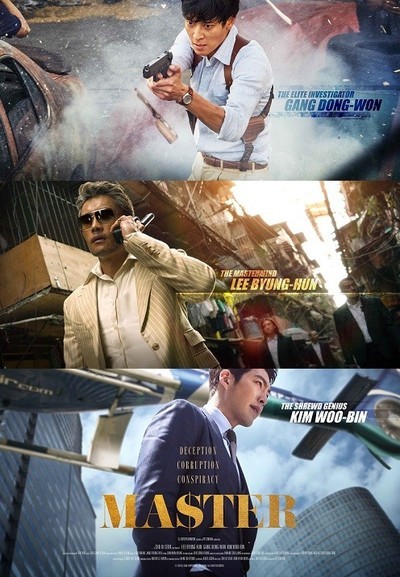