While it takes a while to come to a full boil, "Drug War" is an atypically grim gangster film from the typically inspired Hong Kong filmmaker Johnnie To. At first it looks like an extra-slick and gratuitously mean-spirited police procedural. But the film's flintiness and initially subdued nastiness set it apart from most other action films about the thin line separating cops from crooks.

To ("Sparrow," "Exiled"), and the film's four screenwriters (led by regular To collaborator Wai Ka-Fai) start by breaking down the hierarchical relay of information during a drug bust. Smalltime crooks are snapped up and put through the ringer by Captain Zhang Lei (Honglei Sun) and his partner Yang Xiaobei (Crystal Huang). Buffoonish mules are humiliated, waddling around with their pants down after being forced to strip and take an enema. These interchangeable thugs are little fish compared to Timmy Choi (regular To collaborator Louis Koo), a mid-sized predator in a seemingly tiny body of water. Still, Timmy's treated liked pond scum. Zhang and Yang icily grill him, and give him an ultimatum/proposition: work with the cops to cut off the local drug supply at its source, or get the death penalty. Timmy takes Zhang's deal so quickly that it's impossible to tell if he's buying time or sincerely fighting to save his own skin. That ambiguity is what fuels "Drug War": there is no deal with unbreakable rules because every deal is brokered and decided on a whim.

To's films are usually about macho, playful contests of wills. "Drug War" is no exception. Cops and the crooks constantly try to one up each other, as in an unsettling scene where Zhang, while undercover, has to prove his false identity by snorting cocaine. Each encounter hinges on characters' tics, like the habitual, mirthless laugh Zhang adopts in order to mimic a crook's mannerisms. In To's movies, everything's a game, and the game in "Drug War" is high-stakes poker where everyone bluffs as much as they can afford to.

While "Drug War" evokes everything from "The Wild Bunch" to "Miami Vice," the film's chilly tone is most reminiscent of "Un Flic," French filmmaker Jean-Pierre Melville's blistering 1972 policier. That film is Melville's last, and it feels like it. "Un Flic" follows a testy Alain Delon as he hounds Richard Crenna's bone-weary thief through a halogen-lit, silver-blue fog. To's an avowed admirer of Melville's, and before making "Drug War," he teasingly hinted that he was considering retirement (But not for long: he's already working on his next directorial effort). So it's fitting that "Drug War" is reminiscent of Melville's last existential gem. Both movies treat men that either break or enforce the law as interchangeable pawns. They'll never stop trying to screw each other because they'll never really be in control. The main difference between "Drug War" and "Un Flic" is that To's film has a meaner sense of humor. "Drug War" is often hard to pin down until its conclusion, when the film erupts with a jaw-dropping, Peckinpah-worthy shoot-out set in front of a crowded playground.

But "Drug War" vacillates between lowbrow and gallows humor. The film's makers never resist a chance to make fun of the uncouth and bumbling behavior of low-ranking meth dealers and pushers, the former of whom are often treated like bellowing, animalistic savants. But the film's creators also take time to sneer at both higher-ranking cops and crooks. Consider the scene after Timmy identifies the real masterminds of his drug cartel. A group of capos takes a vote of confidence via closed-circuit walkie-talkies. Everyone's on board except one guy (character actor par excellence Suet Lam), the man whom Timmy calls the cartel's brains. Lam's character leaves everyone in suspense before casting his vote, snapping a selfie while Timmy's credibility and life hangs in the balance. Does Lam know he's being watched, or is he just an oblivious narcissist? Given the information at hand, we can't be sure.

For a while, it seems as if To is just killing time and slowly building towards a big finale. The film is tense throughout, but To doesn't really turn it on until the film's devastating conclusion. These last scenes don't overshadow the rest of the film as much as they put its unnervingly grim tone into perspective. The fact that the film's drama isn't personal but rather about a clash of inevitably similar personalities makes "Drug War" that much more devastating. It's a strong film until it kicks into overdrive, and becomes an exceptional effort from a master filmmaker. 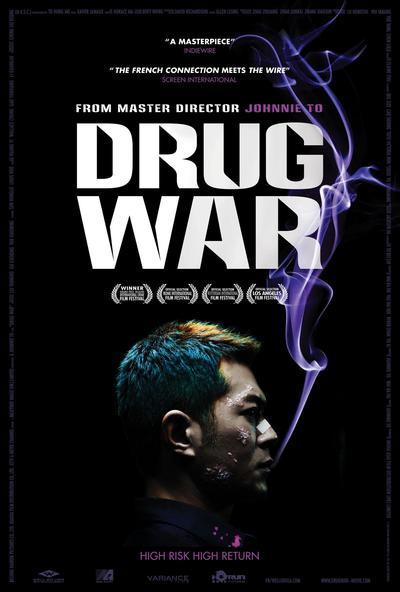