I don’t envy the filmmaker remaking or creating a sequel to a beloved classic children’s story. Yet numerous directors and stars are lining up for this latest craze, and especially the people over at Disney. Starting with “Alice in Wonderland,” the studio has been raiding its vaults to tap into its audience’s entrenched nostalgia, offering familiar characters and storylines in a spate of live-action remakes (“Cinderella” and “Beauty and the Beast”), sequels (“Christopher Robin”) and spinoffs (“Maleficent”) that have been met with mixed reactions.

The latest movie to join the revisited ranks is Rob Marshall’s sequel to one of the most recognized musicals in the Disney canon, “Mary Poppins.” The bar for this project is pretty high, since Marshall has to both entice newcomers and win over ardent fans with a loyalty to the Sherman Brothers’ catchy songs, memorable performances from Julie Andrews and Dick Van Dyke and a heartwarming story of how one stern-faced nanny reunites a family.

Unfortunately, “Mary Poppins Returns” falls quite short of being practically perfect in every way. The cast puts on a good show, but very little can be done to salvage the forgettable numbers by Marc Shaiman and Scott Wittman and dance routines that already look dated. A handful of colorfully charming scenes liven up the movie’s dull events, but its copycat story arc isn’t strong enough to stand apart from the original.

Back in the magical world of Mary Poppins’ 1930s England, things are bleak. The Banks’ family home is threatened unless they can find the MacGuffin—sorry, I meant proof that the dearly departed old man Banks left behind enough shares in company stock to cover the cost of the mortgage and save their house from foreclosure. The now grown Banks children Michael (Ben Whishaw) and Jane (Emily Mortimer) look through the attic, desks and shelves, digging up old childhood relics like their broken kite with their mother’s “Votes for Women” sash, but no form to save their home. Michael’s oily boss (Colin Firth) at his dad’s old bank extends the family’s deadline to come up with the receipt or they will finally lose the home. His three children—Anabel (Pixie Davies), John (Nathanael Saleh) and Georgie (Joel Dawson)—try to help or cheer up Michael since the family is still reeling from the death of their mother that year. Unfortunately, there’s only so much children can do in these grown-up matters.

Just as the Banks family is once again in chaos, who should arrive but the sharp and resourceful Mary Poppins (Emily Blunt)? She invites herself in, much like she does in the original, and brightens the children's day while also hiding their adventures from their beleaguered dad. Her Bert-like friend, Jack (Lin-Manuel Miranda), is part of an army of lamplighters called leeries who have seemingly taken the place of chimney sweepers in this economy. This time, the charismatic city worker doesn’t have a fondness for Mary (not in that way, it seems) but for the spirited activist in the family, Jane. Jack sometimes joins Mary and the three Banks children on a few tangential adventures before the family’s deadline for their home arrives and bad news is imminent.

The movie is a bit of a mixed bag from the get-go, with a wide-eyed Miranda singing a tune that’s not quite in his range and with an accent that doesn’t fully stick. However, he has enough energy to power through numbers that better suit his strengths. Blunt riffs on Mary Poppins by giving her some extra pep, a fresher wardrobe and an all-knowing sly smile that Michael and Jane always seem to miss. She’s delightful to watch, and her version of Poppins seems to take pleasure in throwing the children into magical situations.

Blunt and Miranda share the highlight of “Mary Poppins Returns,” a set of animated musical numbers with talking animals reminiscent of the “Jolly Holliday” sequence in the original, “The Royal Doulton Music Hall” and “A Cover is Not a Book.” Along with the three Banks children, the group travels into an animated world set on the side of a ceramic vase the kids accidentally chipped. Everyone’s costumes look more like drawings, and the movie takes on bright, bold colors missing from live-action London. The sequence feels at once singular yet clearly an homage to the original, and it’s enchanting to see it work—until it doesn’t.

Sticking too close to the footsteps of the original has its own pitfalls, as evidenced by the “Trip a Little Light Fantastic” number. On their way home from a disappointing trip to the bank, Mary and the three children find themselves lost and in need of help from Jack and his streetlighting friends. They assemble for what’s supposed to be a rousing number in the spirit of “Step in Time” but ultimately falls flat. Marshall, who also co-choreographed routines with Joey Pizzi, John DeLuca, Tara Nicole Hughes and Marlon Pelayo, layers in too much for spectacle and ends up with a Baz Luhrmann-size hodgepodge of contemporary dance, parkour and BMX bike tricks that feels like it was choreographed in the last decade. The scene's steps reference everything from “An American in Paris” to “Silk Stockings” to the “Step Up” movies, but it is so messily shot that our characters get lost in the shuffle.

For someone who learned every word to "Supercalifragilisticexpialidocious" thanks to old Disney sing-a-long tapes, perhaps any return of Mary Poppins would never measure up to the original. If anything, watching “Mary Poppins Returns” works best if the 1964 movie is a distant memory or something you just never got around to. There’s almost a parallel equivalent in the new movie for everything in the original, which makes me wonder, why not just stick with the original? For instance, the original had a character called Uncle Albert (Ed Wynn) for a one-off number, “I Love to Laugh.” The new movie features a character named Cousin Topsy (Meryl Streep) for a lukewarm number among many props called “Turning Turtle.” Not quite the catchiest title, but then again, none of the songs take off on their own. Although “Mary Poppins Returns” plays with a fan’s nostalgia with a few Easter eggs and cameos from Van Dyke and Angela Lansbury, there’s a feeling that something is missing beyond an appearance from Andrews. “Returns” is neither really new or familiar, but an odd knockoff that will work for some audiences and leave others craving a rewatch of an old favorite. 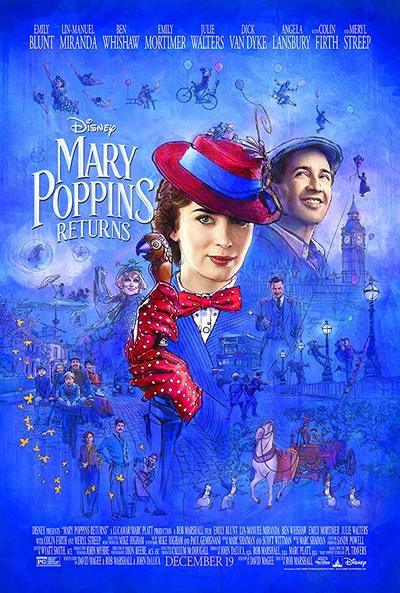 Rated PG for some mild thematic elements and brief action.

Writer (based upon the "Mary Poppins" stories by)