One of the problems with “Christopher Robin” is right there in the title. Compared to his stuffed playthings, Christopher Robin is the least memorable character in the Hundred Acre Wood-set tales penned by A.A. Milne and illustrated by E. H. Shepard. And we don’t even get him as the imaginative, precocious child overlord of Milne’s stories. Instead, Christopher appears in the guise of 47-year-old Ewan McGregor, a man who, in his own words, has not thought about his old pal Winnie-the-Pooh in thirty years. So why does Pooh, a figment of Christopher’s young imagination, return to him after all these years? Because Disney wants your money, of course. I don’t begrudge their need for greed; I just wish they hadn’t given us yet another movie built on the pseudo-psychological cliché that adults need to reconnect with their childhoods in order to be better adults.

After a brief recap of the most famous moments in Pooh’s history, “Christopher Robin” settles into the present day. Pooh and his friends are living their best lives in the Hundred Acre Wood. They have accepted that Christopher has grown up and moved on to London. We see Pooh change from his pajamas into his familiar and very short red shirt (it’s odd that he wears more clothes to bed than he does when he’s roaming the streets, but I digress). Armed with his usual hungry tummy rumble, Pooh sets off to mooch hunny from his friends, only to find that everyone has mysteriously disappeared.

Meanwhile, in the adult world, we learn that Christopher has grown up, gotten married to a woman named Evelyn (Hayley Atwell) and had a daughter name Madeline (a very good Bronte Carmichael). He works a miserable job in Winslow Luggage Factory and is shown to be a World War II veteran. Whoever thought it was a good idea to put violent war footage of the main character into a children’s film must know more about feel-good kiddie films than I do. But again, I digress.

I dawdle because I don’t want to tell you that Christopher is a rather horrible person. He’s a workaholic who neglects his kid and frowns on any notion of playtime she may be harboring. (His idea of bedtime reading involves history books, not “Treasure Island.”) Despite her pleas, he intends to ship her off to boarding school. Making matters worse, Chris’ marriage is on the rocks because he and Evelyn are not doing that thing I can’t talk about in a review of a children’s movie. Worst of all, the luggage factory is failing financially due to lack of travel after the war, so Christopher must fire a good portion of the factory workers. This last item prevents him from going away for the weekend with his family, who is so used to his broken promises that they don’t even pack him a suitcase.

For reasons unexplained, Pooh needs Christopher to help him find his friends Piglet, Eeyore, Rabbit, Owl, Tigger, Kanga and Roo. So when he shows up in London, having gone through Christopher’s tree in the Hundred Acre Wood, his former benefactor thinks he’s losing his mind. Once he’s accepted the situation, however, Christopher Robin sees Pooh as another problem he doesn’t have time to solve. But unlike Paddington Bear (whose movie is one of this year’s best), Pooh isn’t going to last 45 seconds in London. So Christopher Robin has to personally deliver him back to the Hundred Acre Wood, which requires returning to the same old house where Madeline and Evelyn are vacationing.

The travel scenes, and the return visit to the Hundred Acre Wood, are pleasant enough, with McGregor doing a fine job of credibly selling the reunion between him and his stuffed pals. Each of your favorite characters is brought to life in special effects I thought looked exceptionally creepy, but your mileage may vary. Their personalities remain intact, and McGregor interacts with each of them with an admirable amount of happiness and joy.

This joy is short-lived, of course, because adulthood isn’t all fun and games. In fact, it stinks on ice. Christopher Robin has major league problems that the childlike, innocent Pooh and his crew are just not equipped to handle let alone supplement. That’s my biggest issue here. As a kid, the last thing you probably wanted during playtime was for it to be invaded by adults. Even though the characters are pulled into Christopher’s real-life universe, it feels as if reality has invaded the Hundred Acre Wood and sullied it. The film’s Madeline-led climax, a mad race to save Christopher’s ability to fire people, feels like a case where the children have to raise the adults.

By now, you’re probably saying I should just change my name to OdiEeyore Henderson. And I’m fine with that, because I love Eeyore. He was my favorite character as a kid. My mother used to say I had the hyperactivity of Tigger and the miserableness of Eeyore, which is the nicest thing anyone has ever said about me. My partner in attitude is rendered magnificently by the voice of Brad Garrett. As Eeyore, he gets the best lines, which I would expect from a script co-written by misery specialist Alex Ross Perry, and Garrett digs into them with a hilarious mixture of pathos and pessimism. And Jim Cummings’ voice-work as Pooh is also superb, a warm and cozy nostalgic throwback to Sterling Holloway that’s as comforting as Pooh’s favorite food.

Back in 1991, Steven Spielberg’s “Hook” tried to bring a grown Peter Pan, and all his adult problems, back to Neverland. It was a bad idea despite the fact that Neverland is well-matched with the more messed up parts of the adult male psyche. By contrast, the Hundred Acre Wood—Heffalumps notwithstanding—felt safer and more immune to intrusions from scary adulthood. Even at its most amusing—and there are moments when it is downright hilarious—“Christopher Robin” can’t reconcile its darkness and its light. But if these folks want to write an Eeyore movie that stays firmly planted in the Wood, I’ll be first in line to see it. 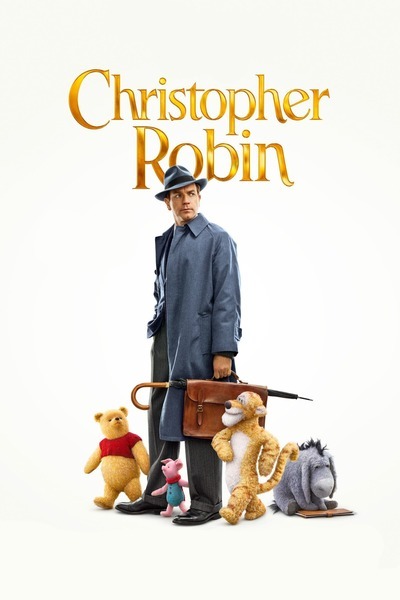 Rated PG for some action.