“Marguerite & Julien,” a lushly photographed pastoral rendezvous propelled by forbidden love and directed by France’s Valérie Donzelli, is definitely not typical fare. The script, spun from a 17th-century legal case involving incest between an upper-class brother and sister, was once intended to be filmed by Francois Truffaut in the early 1970s. And, occasionally, it exhibits a penchant for a certain New Wave playfulness, such as the irising effect that opens and closes several scenes and ensemble gatherings whose action is briefly frozen before bursting back to life seconds later.

Some might react to the central topic at hand with a hearty “Ooh la la.” Others might think, “Ooh, ick.” For me, it is all in the telling. I cut my teeth on cult cinema by attending multiple midnight viewings of “The Rocky Horror Picture Show,” where butler Riff Raff and maid Magenta exhibited what seemed to be a strange sibling affinity for one another—something to do with touching elbows—so I kept an open mind. After all, I didn’t get the vapors when it was revealed that the more-than-friends affection shared by two characters in “August: Osage County” was unknowingly tainted by shared DNA.

My hopes for something beyond the norm were bolstered during the opening moments by the use of a semi-obscure 1965 British pop song, the Artwoods' “Oh My Love,” as the titular twosome flee through a dense forest while being hunted down by dogs and men in military garb. Soon after, there is a sequence with a runaway horse that ends with the steed having to be shot. Anyone who is familiar with “Equus” knows an equine sexual metaphor when they see one.

But then we are treated to a bedtime gathering of enraptured school-girl moppets being told the story of these law-breaking paramours by a caretaker as if it were an innocent fairy tale instead of a recounting of a rather questionable situation. This framing device, which is revisited now and then, does little to enhance what eventually reveals itself to be nothing more than a ponderous platter of “mal fromage,” soapy unfulfilling imported cheese served on stale crackers.

The wan narrative at hand fails on several levels, including an annoying amount of intentional anachronistic details that detract rather enhance. Forgive me if I am wrong, but a romance propelled by verboten desire that refuses to be denied should be at the very least enthralling and perhaps sweep us off our feet. On the other hand, the presence of cars, helicopters, phonographs, prep-school sweaters and foosball tables in a film that concludes in 1603 yet occasionally seems to take place in the 1970s is jarring. Meanwhile, the servants are garbed in period-correct outfits befitting subjects in a Vermeer painting. I guess this jumbled approach is meant to infuse a sense of timelessness into the plight of these crazy rich kids but instead draws attention away from them.

Rather than presenting something akin to the heady youthful cravings of Leonardo DiCaprio and Claire Danes as contemporary versions of Romeo and Juliet, the equally tragic “Marguerite & Julien” often feels more like a version of Richie and Margot in Wes Anderson’s “The Royal Tenenbaums” crossed with the pre-teen runaways from “Moonrise Kingdom,” but minus the humor and insight. The central pair is first introduced as children clearly besotted with one another as they constantly caress each other with their eyes. A clergyman suggests to their apparently clueless parents that the two are perhaps a little too close for comfort and that the older Julien should be sent away to boarding school to separate him from the far more daring Marguerite before she leads him astray.

When the grown Julien (Jérémie Elkaïm, who seems to have one expression and barely a pulse) returns home, he finds that Marguerite (Anaïs Demoustier, a more lively presence who exhibits little of the “melancholy grace” that is supposedly her character’s defining trait) is intent on avoiding being a bride. But during a dinner party with a potential suitor, the siblings slip away and are caught in the act of canoodling (warning: toe nibbling is involved) by their parents. To avoid further scandal, they push their daughter into an unconsummated marriage with a much older and abusive mama’s boy of a tax collector. Poor Geraldine Chaplin as Marguerite’s disapproving mother-in-law is severely made up to look like a mime and mostly plays what appears to be games of mahjong.

Secret letters are surreptitiously passed by intermediaries, brother and sister finally commit the deed, law enforcers are notified and it all goes downhill from there.

Donzelli, a cinematic darling in her native land, is clearly in over her head here. But I do admire her taste in obscure music. Instead of pondering an ending that left me cold as the credits rolled, I instead immediately checked the soundtrack list and Googled the girl group The Shangri-Las and their mesmerizing song “Past, Present and Future,” which employs lyrics of hope and regret spoken over Beethoven’s "Moonlight Sonata." It will give you chills. 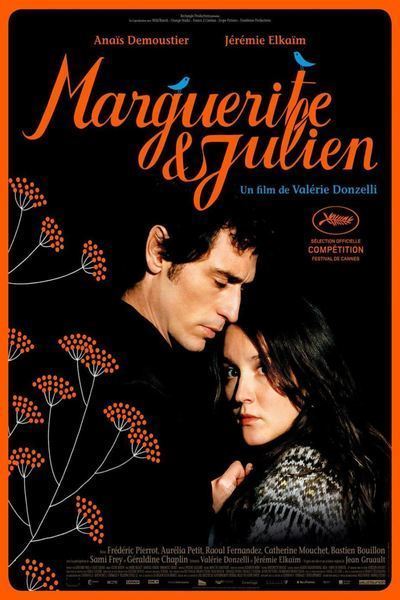