"Magnolia" is operatic in its ambition, a great, joyous leap into melodrama and coincidence, with ragged emotions, crimes and punishments, deathbed scenes, romantic dreams, generational turmoil and celestial intervention, all scored to insistent music. It is not a timid film. Paul Thomas Anderson here joins Spike Jonze ("Being John Malkovich"), David O. Russell ("Three Kings") and their master, Martin Scorsese ("Bringing Out the Dead"), in championing an extroverted self-confidence that rejects the timid post-modernism of the 1990s. These are not movies that apologize for their exuberance, or shield themselves with irony against suspicions of sincerity.

The movie is an interlocking series of episodes that take place during one day in Los Angeles, sometimes even at the same moment. Its characters are linked by blood, coincidence and by the way their lives seem parallel. Themes emerge: the deaths of fathers, the resentments of children, the failure of early promise, the way all plans and ambitions can be undermined by sudden and astonishing events. Robert Altman's "Short Cuts" was also a group of interlinked Los Angeles stories, and both films illustrate former district attorney Vincent Bugliosi's observation in Till Death Do Us Part that personal connections in L.A. have a way of snaking around barriers of class, wealth and geography.

The actors here are all swinging for the fences, heedless of image or self-protective restraint. Here are Tom Cruise as a loathsome stud, Jason Robards looking barely alive, William H. Macy as a pathetic loser, Melora Walters as a despairing daughter, Julianne Moore as an unloving wife, Michael Bowen as a browbeating father. Some of these people are melting down because of drugs or other reasons; a few, like a cop played by John C. Reilly and a nurse played by Philip Seymour Hoffman, are caregivers.

The film's opening sequence, narrated by an uncredited Ricky Jay, tells stories of incredible coincidences. One has become a legend of forensic lore; it's about the man who leaps off a roof and is struck by a fatal shotgun blast as he falls past a window before landing in a net that would have saved his life. The gun was fired by his mother, aiming at his father and missing. She didn't know the shotgun was loaded; the son had loaded it some weeks earlier, hoping that eventually one of his parents would shoot the other. All allegedly true.

This sequence suggests a Ricky Jay TV special, illustrating weird coincidences. But it is more than simply amusing. It sets up the theme of the film, which shows people earnestly and single-mindedly immersed in their lives, hopes and values, as if their best-laid plans were not vulnerable to the chaotic interruptions of the universe. It's humbling to learn that existence doesn't revolve around us; worse to learn it revolves around nothing.

Many of the characters are involved in television, and their lives reflect on one another. Robards plays a dying tycoon who produces many shows. Philip Baker Hall, also dying, is a game show host. Cruise is Robards' son, Frank "T.J." Mackey, the star of infomercials about how to seduce women; his macho hotel ballroom seminars could have been scripted by Andrew Dice Clay. Walters is Hall's daughter, who doesn't believe anything he says. Melinda Dillon is Hall's wife, who might have been happier without his compulsion for confession. Macy plays "former quiz kid Donnie Smith," now a drunk with a bad job in sales who dreams that orthodontics could make him attractive to a burly bartender. Jeremy Blackman plays a bright young quiz kid on Hall's program. Bowen plays his father, a tyrant who drives him to excel.

The connections are like a game of psychological pickup sticks. Robards alienated Cruise; Hall alienated Dillon, Bowen is alienating Blackman. The power of TV has not spared Robards or Hall from death. Childhood success left Macy unprepared for life and may be doing the same thing for Blackman. Both Hall and Robards have employees (a producer, a nurse) who love them more than their families do. Both Robards and Hall cheated on their wives. And around and around.

And there are other stories with their own connections. The cop, played by Reilly, is like a fireman rushing to scenes of emotional turmoil. His need to help is so great that he falls instantly in love with the pathetic drug user played by Walters; her need is more visible to him than her crime. Later, he encounters Macy in the middle of a ridiculous criminal situation brought about to finance braces for his teeth.

There are big scenes here for the actors. One comes as Cruise's cocky TV stud disintegrates in the face of cross-examination from a TV reporter (April Grace). He has another big scene at Robards' deathbed. Hall (a favorite actor of Anderson's since "Hard Eight") also disintegrates on TV; he's unable to ask, instead of answer, questions. Moore's breakdown in a pharmacy is parallel to Walters' nervousness with the cops: Both women are trying to appear functional while their systems scream because of drugs.

All of these threads converge, in one way or another, upon an event there is no way for the audience to anticipate. This event is not "cheating," as some critics have argued, because the prologue fully prepares the way for it, as do some subtle references to Exodus. It works like the hand of God, reminding us of the absurdity of daring to plan. And yet plan we must, because we are human, and because sometimes our plans work out.

"Magnolia" is the kind of film I instinctively respond to. Leave logic at the door. Do not expect subdued taste and restraint, but instead a kind of operatic ecstasy. At three hours it is even operatic in length, as its themes unfold, its characters strive against the dying of the light, and the great wheel of chance rolls on toward them. 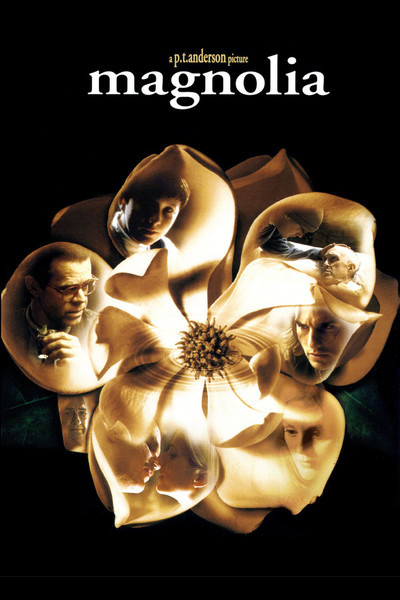 Rated R for strong language, drug use, sexuality and some violence