Tilman Singer’s “Luz” was one of the most buzzed about titles on the genre festival circuit in 2018, earning raves at Montreal’s Fantasia Fest and Austin’s Fantastic Fest. It’s easy to see why. With echoes of everything from Dario Argento to Peter Strickland, “Luz” is a major announcement of a new talent. Singer has what horror fans look for in young directors – a very strong eye, a unique set of influences, a gift with sound design. His debut work sometimes feels more like a student film than a complete project – and not just because it’s barely 70 minutes – but it’s one of those genre pics that instantly raises the bar for whatever he does next. It may have fallen a bit short of my expectations after its remarkable first 15 minutes and the general buzz the film came with, but I am all-in for whatever Singer does next. Someone give him a blank check to do whatever he wants.

Shot on 16MM on only a couple of sets, “Luz” is a Eurohorror nightmare from a filmmaker who clearly admires the Giallo masters of the ‘70s. From the very first shot, an extended, grainy, grimy take in which a cab driver named Luz (Luana Velis) walks into an empty lobby and moves as if she’s in a daze, it’s clear that this is not your typical ‘10s horror film. It shares more in common with Strickland or David Lynch than modern slasher pics or even the work of someone like Jordan Peele. It is about sound and mood more than plot or character, designed to mesmerize you into a cinematic trance. You know how often your dreams don’t make perfect sense? That’s the way to approach “Luz.”

With that in mind, a plot recap seems almost silly. In the opening scenes, the hat-wearing, slightly-injured Luz seems lost and confused. Meanwhile, a woman in a bar named Nora (Julia Riedler) chats with the only other person there, a doctor (Jan Bluthardt). We learn that Luz summoned a demon years earlier with a profane prayer at her religious school. And now that entity wants to find its way back to Luz. The opening parallel sequences are remarkable, easily my favorite part of “Luz.” Singer displays a mastery of composition and startling sound design from the very beginning and the first 20 minutes of “Luz” could have made for a great short film on their own.

Singer lost me a bit in the mid-section of “Luz,” which gets surreal in a way I wasn’t expecting. An interrogation of Luz starts to feel like experimental theater as lines are spoken in Spanish, German, and English, and Singer plays around with space and sound. Luz seems to be recounting what happened earlier that night in much the same way a theatre major would tell a story to her class, complete with pantomime, but Singer drops in the sounds of what Luz is describing like gear shifts and traffic. It’s all right on that line between “interesting” and “effective.” I was never bored during this stretch of the film, but the mesmerizing impact of the opening scenes seemed to fade away.

Singer brings “Luz” in for an effective ending, but it still feels like a movie that just barely works as a feature film, and almost would have been better as a 45-minute, extended short. Still, while this may read like only a mild recommendation for most readers, it is a hearty one for genre fans. We are lucky enough to be in a very strong era for horror, and I have a feeling Singer is going to be a major part of it. 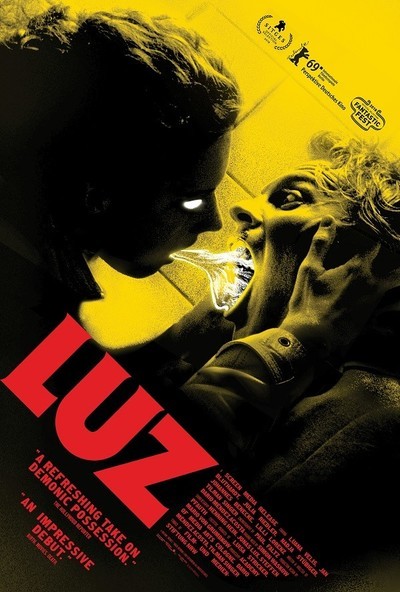