"London Road," based on the stage musical of the same name, is one of those promising ideas that never becomes a whole lot more than a promising idea, despite an extraordinary expenditure of effort by all involved.

The concept certainly is unusual: writer Alecky Blythe and composer Adam Cork retell the story of the so-called Ipswich Ripper or Suffolk Strangler, who terrorized an area near London Road in 2006 and was found guilty two years later of murdering five prostitutes; but rather than devise a "Sweeney Todd"-type, sung-through musical with original lyrics arranged in a traditional style, the musical's creators interviewed real life residents and transcribed their statements verbatim, including "ums," then wedded these documentary statements to music.

The film version is directed by Rufus Norris, who helmed the original stage production of "London Road" for the Royal National Theater. Although every frame of it is suffused with energy and sprightly intentions, it ultimately doesn't add up to much. In fact, at its worst, the direction is a compendium of stylistic cliches of early 21st-century filmmaking, including widescreen images bled of color and sometimes composed in deliberately off-center or unbalanced ways. These are the sorts of choices that a stage director makes when he is adapting a dark modern musical for film and has technique but no actual vision. It's toolkit filmmaking.

And—although I'm hesitant to guess about this because I have never seen this musical on stage—I would imagine that seeing this story unfold beneath a proscenium arch would tend to minimize the artificiality of the construct rather than foreground it. The latter is unfortunately the case with the movie version, a slate-colored ensemble shot on location with key participants or "witnesses" often posed like figures in a TV news interview or an old-fashioned documentary film.

As verbatim statements that have been chopped into fragments are layered over each other in the manner of an Andrew Lloyd Webber act-ending showstopper, residents of London Road compete with the media in breathlessly narrating the story, wondering if this person or that person is "actually" the killer, and walk the streets feeling justifiably or unjustifiably terrified. Unfortunately, none of the characters on screen really ever come alive; the citizens, the reporters and everyone else remain a largely indistinguishable mass even as paranoia mounts. And the fact that the production takes such a long time rousing itself to care about the killer's victims and the area's surviving sex workers gives the entire project a whiff of upper middle-class dilettantism.

The excellent cast includes Tom Hardy in a cameo as a cab driver, who insists that his thorough knowledge of serial killers and their habits doesn't make him a suspect. But they all ultimately seem as if they are participating in a dubious enterprise, devised by gifted individuals who somehow can't take a big picture view of a story that would seem to demand one. "London Road" is brilliant in all the wrong ways. 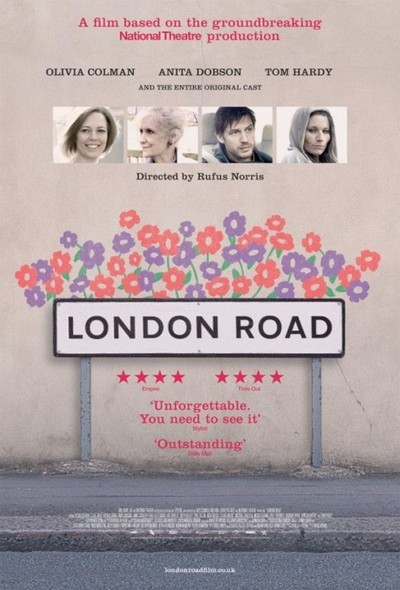