“Olympus Has Fallen” was a pornographically violent crapfest that took the standard “Die Hard” template, located it within the confines of a White House being attacked by Korean terrorists and tried to use such sights as the White House in flames, hundreds of corpses on the front lawn and the female Secretary of Defense being brutally beaten as the inspiration for the ensuing orgy of shootings, stabbings, neck-breakings and quips delivered by star Gerard Butler. A truly odious work, it wasn’t even the best White House-set “Die Hard” knock-off released in 2013—the Channing Tatum/Jamie Foxx vehicle “White House Down” was an infinitely better film that didn't make you feel as if you needed a shower afterwards—but, presumably because it happened to come out first, it was the more successful of the two films. As a result, we now have “London Has Fallen,” a horrible and wildly unnecessary follow-up that might actually be worse than its predecessor.

As the film opens, our hero, Mike Banning (Butler), the personal Secret Service agent assigned to guard President Benjamin Asher (Aaron Eckhart), is contemplating resigning his post in order to spend non-lethal quality time with his wife (Radha Mitchell) and their about-to-be-born child when duty calls once again—the Prime Minister of London has just died suddenly and he is to accompany Asher to the funeral, which will be attended by most of the leaders of the free world. As they all begin to congregate for the funeral, however, a series of coordinated attacks begin involving bombs, rocket launchers and hundreds of fake cops mowing down people in the streets that allow viewers to see most of London’s landmarks blown to smithereens and presumably thousands of people—including the leaders of France, Canada, Italy and Japan—killed in any number of gruesome ways. Happily, thanks to Banning’s decision to move President Asher’s arrival ahead of schedule, they manage to escape and even survive a crash landing when Marine One is shot down—perhaps the only time in the film when something crashes and does not instantly go up in a massive ball of flames, other than the film itself.

This all turns out to be the doing of Aamir Barkawi (Alon Aboutboul), a Middle Eastern terrorist who, according to Vice-President Trumbull (Morgan Freeman), has “killed more people than the plague.” (Oddly, this only earns him a #6 ranking on the Most Wanted list—what does an international criminal have to do to crack the top five these days?) Asher called in a drone strike on Barkawi a couple of years earlier that went sideways when the location turned out to be his daughter’s wedding. He is so bound and determined to get revenge that even though he presumably intended Asher to be killed in the initial strike, he nevertheless has set up a Plan B that involves capturing his foe and streaming his execution online for the world to see. While Trumbull and the cabinet try to figure out a way of extracting Asher, Banning tries to keep him out of harm’s way with the aid of Jacquelin Marshall (Charlotte Riley), a spunky MI-6 agent who is determined to figure out who is the agency's mole that helped allow the attacks to happen—a challenge since virtually every British governmental, police or intelligence worker is portrayed as either a vile traitor or a clueless idiot.

Whatever the flaws of “Olympus Has Fallen,” it at least had a certain unity of purpose. It was determined to show the White House under a full-scale assault in the loudest and goriest manner imaginable. By comparison, “London Has Fallen” feels as if it originated as just another tired “Die Hard” knockoff that the producers came across in a pile of unproduced scripts and awkwardly rejiggered into a sequel with minimal effort. (That would at least explain why so many cast members from the original—including Freeman, Mitchell, Angela Bassett, Robert Forster and Melissa Leo—have been shoehorned into the proceedings without being given anything of note to do.) It certainly seems curiously uninterested in its own equally gauche premise. If you are planning on going to see it primarily to see London’s most famous landmarks in action, you should realize that after the major assault early in the proceedings, the locations shift away from the familiar facades to largely anonymous streets and building spaces that only barely disguise the fact that most of the film was actually shot in Bulgaria.

The elements that do carry over from the original film are, alas, some of its most loathsome characteristics. Once again, the violence is way, way over the top. While there is nothing quite as grisly as the aforementioned beating of the Secretary of Defense, the sheer amount of people getting gunned down, blown up or stabbed in the head gets a little sickening after a while and that is even before factoring in the idea of watching a cartoonish entertainment along these lines so soon after the attacks on Paris last fall. The film also tries to punctuate every violent bit with a quip of some sort but fails so badly that it just adds another unpleasant edge to the proceedings. (Example: After the president, who has been stashed in a room for safekeeping, bursts out to shoot a terrorist who has gotten the drop on Banning, Banning responds by saying, “I was wondering when you were coming out of the closet.”)

Other than serving as proof that Gerard Butler can make movies that are even worse than “Gods of Egypt” (not that this should be encouraged), there is absolutely nothing of value to “London Has Fallen” and the fact that it will no doubt pull in more money at the box office in its opening weekend than Terrence Malick's “Knight of Cups” will gross in its entire run is too depressing to even contemplate. Unless you have some insane desire to see what will surely go down as one of the very worst films of 2016, you would be far better served staying at home and finally giving “White House Down” a look. 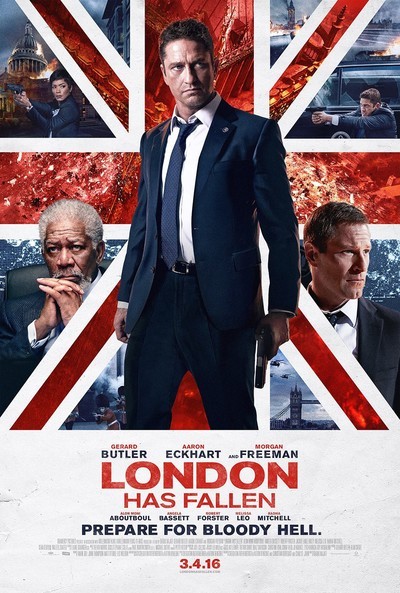