You've got to give the Chutzpah Award to director Roland Emmerich. In his action thriller "White House Down" he's competing not just with the recent similarly themed "Olympus Has Fallen," but himself: How to trump your own signature scene in "Independence Day", a film in which an alien spaceship wipes out the home of the U.S. President? Breaking out of the apocalyptic mode he's known for, including destruction by climate change in "The Day After Tomorrow," and in "2012," he goes with shameless but clever self-homage. Early into "White House Down," right around the time the Capitol building is destroyed, a voice is heard: "Just like in 'Independence Day.'"

This time it's an inside job; aliens not required, what with right-wing sociopaths, white supremacists, and assorted bureaucrats with nasty agendas right here in the homeland. The title also hits us subliminally: Is the White House really Our House? And how much does it hurt us when it's attacked?

In "White House Down," Channing Tatum plays John Cale, a Capitol Hill police officer, Afghanistan vet and divorcé. He can't make the grade of security guard for the President because he was a bit of a slacker, as his Secret Service interviewer (Maggie Gyllenhaal) reminds him. So it's a sad moment when he has to pick up his waiting daughter Emily (Joey King). Skipping over the bad news, he instead offers a White House tour. Suddenly a paramilitary force commandeers the place and threatens to start World War III. Wrong place, right time for Cale, as he becomes the de facto presidential protector after all, though in the extreme straddle position of having to cover the President and rescue Emily when she is taken hostage.

Regret is a great motivator. I'd like to have one of these guilt-driven security guys protecting me: Clint Eastwood in "In The Line of Fire" (1993) who failed to save the life of John F. Kennedy; "Olympus Has Fallen" bodyguard (Gerard Butler), who did rescue the president, but not the first lady; Channing Tatum specifically, for every "Sexiest Man Alive" reason, plus his dance-trained agility and his desire to impress and bond with his estranged daughter.

In other near-clone comparisons, you can't help but think the "Die Hard" franchise, with its alienated kids (as in the latest "Die Hard," Emily even calls her father John for a while before breaking through to "Dad.") The "Die Hard" franchise has so run its course that the only real pleasure left is finding out how much punishment McClane can take. Cale doesn't get as brutalized by battle as John McClane, though he takes many knocks.

In "White House Down," the wisecracks are spread out, Tatum being too much of a sweetheart type to deliver all of them. The evil computer genius who gains control of Norad squeals "Don't touch my toys." When the President and Cale commandeer the Presidential limo (quite a car chase upgrade!), and after Sawyer remembers the backseat will not be appropriate for riding shotgun, he starts shooting. "That's something you don't see every day" says an amazed aide, watching from afar. The script, by James Vanderbilt of "The Amazing Spider-Man," is hip. Bad enemy boys can be diabetic; a White House tour guide (a truly witty turn by Nicolas Wright) begs the marauders to be careful of the national artifacts.

President Sawyer, as imagined by Foxx, is a lot of fun ("I'm not doin' that shit!" he yells, watching Cale working some dangerous cables in the elevator shaft they're trapped in). Expressing a deeply humane political vision, yet with a true politician's common touch, the president also offers Nicorette most graciously. Any resemblance to the current resident of the White House is intentional. Sawyer and Cale get nearly equal screen time, bonding as action heroes together against the world.

Gyllenhaal initially strikes the right tone as Agent Finnerty, coolly turning down Cale, but watching empathetically as he exits. Note to the New Woman: it's one way to handle professional duties with aplomb while letting your nurturing side show a bit. Yet after the take-over, and in a secret bunker/War Room, she issues orders like a zonked out zombie. James Woods gives a bravura performance as her boss, the head of Secret Service with his own frightening secrets that drive the film; but even here there is a light touch, as we watch him reaching for his Lorazepam.

The special effects are scary-hairy enough to satisfy the midsummer "I wish to go to the moon" impulse. Emmerich has his regular crew on board: cinematographer Anna Foerster, and his visual effects team of Volker Engel and Marc Weiger. They deliver the swirl of terror, smash-ups and imminent disaster. CGI can be spectacular for the seven plagues; of course it works in the action film, too. For this viewer, though, the good news is there's less of it than feared, and a few touches are quite clever. An airplane demolishment takes you by surprise with a sly film history reference.

"White House Down" is still too gun-happy, and too long, but however you feel about the Oval Office, our country, or some of the movie's jingoism, young Emily is worth rescuing. King is an actress who can show courage, loyalty and justifiable fear without ever getting maudlin, and her Emily is the true hero of "White House Down," unbelievably brave, though you still believe her. Like all kids these days, she's a whiz at technology and picture-taking even in the most dire circumstances. She makes you hopeful about the generation which will lead the country soon enough. 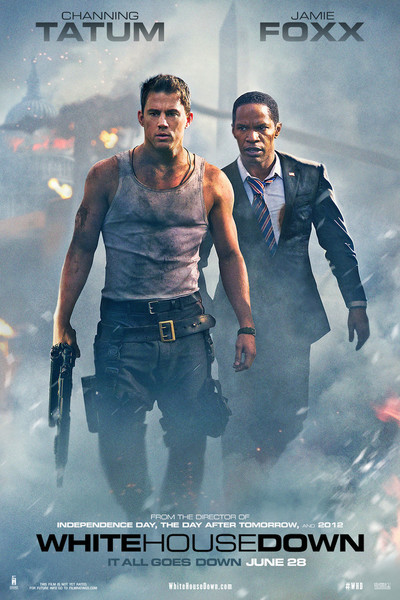