They don't make movies like "Gods of Egypt" anymore, and yet they never made movies like "Gods of Egypt." This is the paradox, and for a while, it's a fun one. But after a point, this proudly silly film about gods and mortals in ancient Egypt devolves into an sword-and-sorcery-flavored riff on a weak Marvel movie. The alternately cornball and self-aware dialogue and the clearly not state-of-the-art CGI would seeming charmingly retro (like something from a TV miniseries two decades ago) if the movie didn't trot out one epic action film cliche after another.

Gerard Butler stars as Set, god of disorder. He wrests control of his kingdom from his brother, Horus (Nikolaj Coster-Waldau) in an opening hand-to-hand combat sequence where the siblings clang swords and beat on each other for a while, until they both assume the form of armored creatures that look like Marvel-movie android warriors and leap through the air, knocking each other against pillars until Set finally tears Horus's eyes out. (Why the combatants don't assume super-powerful form to start with is one of those questions that films like this never answer.)

At first, Set wants to kill Horus outright, but relents when the goddess Hathor (Elodie Yung) begs him to be merciful. Set banishes the blind Horus to a crypt where he's eventually set free by the intrepid mortal Bek (Brenton Thwaites), a resourceful thief whose beautiful young lover, Zaya (Courtney Eaton of "Mad Max: Fury Road"), died from an arrow wound and is now trekking through the underworld en route to her final judgment. According to lore, only the king of Egypt can free a dead person from the between-state and return them to the land of the living. That means Horus has only a few days to wrest control of the kingdom from Set. If he doesn't, Bek's girlfriend will stay dead forever.

That's a pretty good setup for an action-adventure: a coup on a timetable. The director, Alex Proyas ("The Crow," "Dark City"), seems sure of what sort of film he wants to make. Despite the ostentatiously virtual images and the comic book and borderline science-fiction touches, in its heart "Gods of Egypt" is an adventure in what used to be called the "swords and sandals" genre. Every brawny chest is waxed, every bosom heaving. The characters address crowds of thousands of (digital, alas) extras, and run their enemies through with swords and spears and zap them with death rays (hey, some of them are gods, okay?), and swear fealty to this and vengeance against that, and tromp around in metal tunics while saying things like, "Why was I made to walk on burning sands while my brother strolled barefoot alone on the shores of the Nile?" and "Give me my eyes!" and "Were you using my house for your fornicating?"

It's stocked mainly with super-fit actors, few of whom are likely in the ballpark of what actual ancient Egyptians looked like, unless Egypt was populated mainly by white folks with gym-sculpted bods. Proyas sort-of-apologized last year for the casting, saying he would've hired more actors of color if it hadn't made the movie so hard to finance at the budget level he needed. As is, the most prominent nonwhite actor is Chadwick Boseman as a faintly bitchy incarnation of Thoth, the father of science, religion, philosophy and magic. Nevertheless, it's a good cast. Nobody's phoning it in. They're all present and laying it on with a trowel, including Rufus Sewell (star of "Dark City") as the architect Urshu—who has the snitty defiance of a young Tony Curtis—and Geoffrey Rush as Set and Horus' grandfather, the sun god Ra, who lives on an orbital platform in space, and spends eternity using his sun-bolt lance to zap a giant black leviathan-worm that wants to eat its way through the planet. (No point using this movie to cheat on your mythology final, kids.) Most of the lines in Matt Sazama and Burk Sharpless' screenplay are delivered straight, without winks, even if they're clearly meant to provoke applause or knowing laughter. (Perusing the skyscraper-sized tower Set ordered Urshu to build for him, he asks, "Could it be any taller?")

"Gods of Egypt" has a vision, cockeyed though it may be. There are airborne chariots drawn by winged beetles and flocks of birds, an Indiana Jones-style treasure trove rigged with booby-traps, and a bracelet that repels 42 different demons. When gods are cut, they bleed gold. After Urshu walks in on Set during a post-coital moment, the newly-crowned king of Egypt rolls out of bed and dons a smoking jacket covered in multicolored metal beads; it looks like something Prince would wear to a bar mitzvah.

It's a shame that "Gods of Egypt" is unable to resolve key conflicts except by having characters fight on top of pyramids and mountaintops while the camera whirls around them, or run away from theoretically enormous yet oddly weightless monsters and falling objects, just like every other big budget action film clogging up multiplexes. Things fly this way, things fall that way; people leap through the air on wires and yell "Aaaauuuugggggh!"; Dolby digital sound effects go boom and creeeeaaaaak and boooosh and the editing goes cut-cut-cut-cut to hide that few of the images are composed strikingly enough to linger on. The movie could have been a work in the mode of "Barbarella" or "Flash Gordon" or "The Sword and the Sorcerer"—larks that were cobbled together from scraps of their decade's cinematic and design and fashion cliches, yet formed into works of true personality, films that were simultaneously self-aware and innocent. But the repetitious, unimaginative action kills the charm. 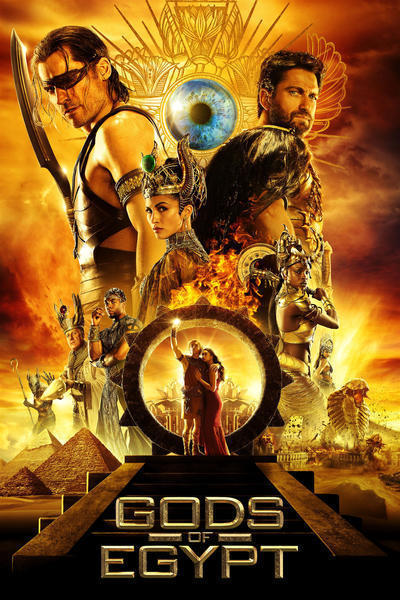 Rated PG-13 for fantasy violence and action, and some sexuality.