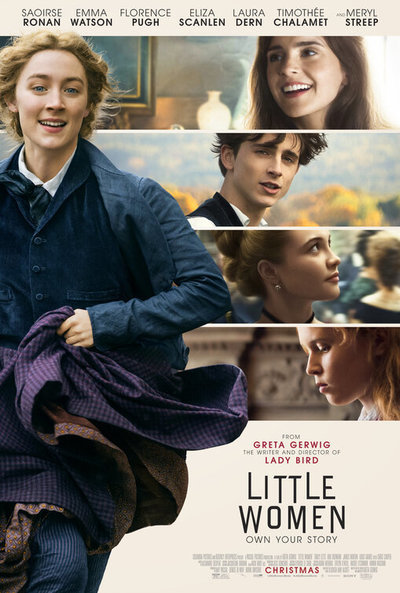 “Courage doesn’t grow overnight,” Greta Gerwig told me in an interview at the 2017 Telluride Film Festival, on the heels of the rapturous world premiere of “Lady Bird.” “That first mountain is probably the hardest, but it definitely needs to be crossed,” she added, emphasizing her continued desire to pursue her calling as a director, after finally putting herself out there with a solo effort. How right she was about that calling and how immensely satisfying it is to see her courage take an even more confident shape in a major Hollywood production with scale and scope! A cozy, polished and masterly cinematic rendering of Louisa May Alcott’s immortal 19th-century novel (originally published in two parts in 1868 and 1869), “Little Women” solidifies Gerwig’s one-of-a-kind voice on the page and behind the camera, opening up the classic in a blissful and innovative screen adaptation that feels ageless and vastly of today.

Considering the text’s countless iterations as TV series, stage productions and feature films—including a pair of silent-era editions, 1933’s magnificent Katherine Hepburn-starrer by George Cukor and Gillian Armstrong’s excellent 1994 version (Gerwig’s film is easily on par with those latter gold-standard two)— that noticeable freshness of this new “Little Women” is no small feat. But it also shouldn’t come as a surprise, should it? In truth, Gerwig has always possessed a distinct auteurial stamp in her artistic expression; a disarming uniqueness she shined through in mumblecores and Noah Baumbach collaborations alike, that predates even her semi-autobiographical directorial debut.

Here (and there will be spoilers ahead), the filmmaker generously pours her signature buoyancy into a novel she clearly knows inside and out, infusing the yarn with the lived-in intimacy of “Lady Bird” and the womanly resilience and camaraderie that defines much of “Frances Ha.” Moreover, she successfully turns the authority she has over the book into gold, orchestrating the tale’s segments both melodically and in a non-linear fashion. In doing that, Gerwig taps into a radical proposition—she unearths a reflective sense of memory and nostalgia within the conversation she fosters between the film’s two timelines. Her structure of well-paced flashbacks, laced with emotional peaks and soothing cadences, is first a surprising puzzle and then a source of awe, but never disrespectful to Alcott’s intentions. It is a smart twist for “Little Women” loyalists as much as an inventive way-in for first-timers.

And the essence of the March Sisters Jo, Meg, Amy and Beth is still very much in tact, with the siblings’ hearts and souls preserved in the right place. Reuniting with Gerwig after their Sacramento-set outing, the inimitable Saoirse Ronan of “Brooklyn” (among the greatest actors of her generation) plays the rebellious and ever-energetic Jo, an Alcott surrogate of sorts. When we meet the strong-minded, career-focused tomboy, Jo is already seven years into the future—not residing in “New Hampshire where writers live in the woods,” but at a boarding house in New York, pursuing her dreams to become a novelist. In these early moments, she has a vibrant spring in her step, despite already having heard a “no” (or, a “yes” with conditions) from an editor (Tracy Letts, as fatherly and charmingly sarcastic as he was in “Lady Bird”) who instructs her to give her female characters the conventional happy ending of marriage. And she has also met her harshest (but most honest) critic—the quietly charismatic Professor Bhaer (Louis Garrel), Jo’s intellectual equal she is destined to fall in love with later.

The future also gives us a glimpse of the artistically inclined, Europe-touring Amy (Florence Pugh, Ronan’s match as a force of nature) and her chance encounter with the Marches’ beloved ex-neighbor Laurie, expressively played by a feather-light, floppy-haired Timothée Chalamet, among everyone’s favorite young crushes with his soulful depth and sharp-edged cheekbones. Completing the picture is Emma Watson’s Meg—the headstrong, clothes-conscious sister who sets aside her monetary temptations and marries for love regardless of financial considerations—, the lesser-known Eliza Scanlen’s shy but talented pianist Beth, Laura Dern’s loving, sacrificing Marmee, as well as Meryl Streep’s feisty and practical-minded Aunt March. With well-considered shuffles between timelines edited by Nick Houy, Gerwig caringly feeds the clan’s Massachusetts history to the viewer in increments. In that, a turned down marriage proposal, a romantic affection that brews in secret, divergences in class, a sisterly rivalry and a devastating illness lurking in the corner all receive their proper due within Gerwig’s adventurous but disciplined assembly. Knowing what the girls are destined to informs our gaze into their adolescent years; and similarly, witnessing their youthful struggles amplifies the immediacy in which we engage with the ladies’ future selves.

Gerwig’s command on “Little Women” doesn’t stop at her ease with this configuration. Equally important is how she grasps and transposes the pleasant nature of the story that resembles the inviting warmth of a blanket on a cold winter day. Like its predecessors, Gerwig’s “Little Women” is comfy when the Marches gather by the fireplace or convene around a dining table for their Christmas lunch. And it’s a joy to watch this welcoming temperament (always aided by pitch-perfect costumes, Yorick LeSaux’s snug cinematography and a richly textured production design) gradually lend itself to something desperately romantic. Yes, on one hand, Gerwig’s film gently critiques the old-fashioned perception of marriage as an institution where men are financially expected to look after women. But on the other, it also celebrates love and matrimony as choices equal to career dreams—Meg does, after all, choose to start a family and defend the validity of her decision to Jo in an understatedly feminist scene.

But the crown jewel of “Little Women” is the fundamental update Gerwig gives to Jo in a way Alcott would have approved, maybe even adored. By the end of it all, our Jo grows into not only a love-struck, zesty young woman of a classic romantic comedy but also a fearless author with ink-stained hands, unafraid to negotiate her worth and proud to watch the birth of her hardcover, gold-lettered baby. It’s a glorious conclusion that will earn your tears with its optimism and deep respect for Alcott, who had to compromise her ideal “Little Women” ending. Gerwig captures her ahead-of-its-time spirit and turns it into something infectious for a new generation with their own aspirations, whatever they may be.