The late great Elmore Leonard, on whose novel “The Switch” this movie is based, gets an executive producer credit on the movie. It’s significant, perhaps, that said credit doesn’t appear until after the movie’s played out. Shows a certain confidence on the part of the other filmmakers: they didn’t feel the need to stack the deck with an emblem of Leonard’s approval at the film’s onset. It turns out, the confidence was warranted: “Life of Crime” is a pretty engaging, and pretty authentically Leonardesque, comedic crime movie. While it doesn’t hit the highs of the very best movies based on the author’s works—those would be Steven Soderbergh’s “Out of Sight” and Quentin Tarantino’s “Jackie Brown,” two outstanding examples of American narrative cinema of the ‘90s—it’s also far less slick and ingratiating than the watchable but very Hollywood-processed likes of “Get Shorty” and “Be Cool.”

The assets of “Life Of Crime” include a relatively credible 1978 Detroit setting, a generous array of seamy characters with seamy aspirations (and interesting ways of talking), and a pretty first-rate cast playing those characters. John Hawkes and the performer usually known as Mos Def, here going by the name Yasiin Bey (no, I don’t know why) are the criminals Louis and Ordell, and yes, these are the same characters who turn up in “Rum Punch,” which was the novel on which “Jackie Brown” is based. For the purposes of this story, both of these bad guys are a little less…awful than they are in Tarantino’s film. Point of fact, they’re kind of likable, especially Louis. He’s first seen being talked into a kidnapping scheme by Bey’s Ordell, who subsequently proves his get-the-criminal-job-done bonafides by facing down an obstreperous pimp. Ordell’s scheme is to kidnap the wife of a corrupt local businessman, and demand as ransom the money he’s been secretly stashing down in a tax-shelter bank in the Bahamas. There are already a lot of holes in this scheme to begin with—Leonard’s crooks are rarely the brightest bulbs on the Christmas tree—but the biggest comes to light after the pair kidnap the disillusioned wife, Mickey, and stash her in the home of an accomplice who’s a Nazi gun nut. That is, Mickey’s husband, stiff-necked drunkard and all-around unpleasant fellow Frank, isn’t all that interested in getting his wife back. And he’s also got a little girlfriend at his Caribbean love nest, and she sees an opportunity in Mickey’s misfortune.

Before I got off on the plot synopsis I was praising the cast, and of course Hawkes and to a lesser degree the artist formerly known as Mos Def are reliable screen goods. As are Tim Robbins as Frank (a role that would have looked tailor-made for Christopher MacDonald 20 years ago), Isla Fisher as Frank’s, um, little chippie, Mark Boone Junior as the Nazi gun nut, and Will Forte as a social peer of the unhappy couple who’s got a weird thing for Mickey. The big surprise here is Aniston, who gives one of her best if not best ever movie performances here. Although she’s the female lead, she really lets herself melt into the ensemble, and I don’t know if it’s the part or if she’s really upped her acting game, but her performance is measured, engrossing, and empathy-generating without any overt striving, cutesy stuff, or sitcom-style tics. She actually develops quite a rapport with Hawkes, not a fellow you expect her to mix with either in character or not. The amusing twists and turns of the script, the multiple instances of bracing humor and consistent tension, help the cast bring this small-scale thriller to the place it clearly wants to be. Well worth seeing, particularly for Leonard people. 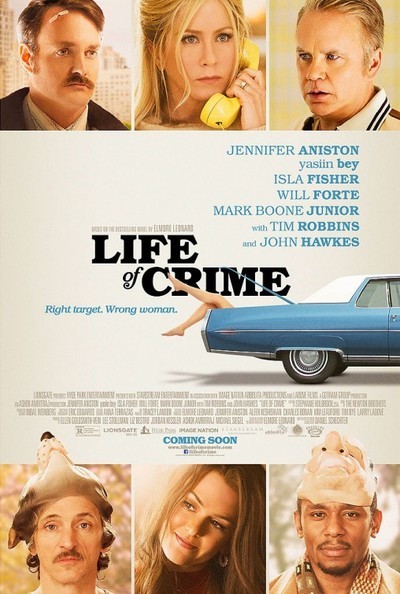 Rated R for language, some sexual content and violence

Will Forte as Marshall Taylor