The emotional and visual power of dance is so great that even a mediocre film can stoke our affection merely by showing it. The mediocre film in question is “Leap!,” the title of which will henceforth be typed without the exclamation point, because exclamation points are not only typographically irritating but emblematic of a shallow hucksterism that undercuts the entire project.

This story of a plucky orphan from Brittany who tries to make it as a ballet star in Paris is set almost 150 years ago, and lacks magic, talking animals, pop culture references that will be dated six months from now, and other tics common to so American-made cartoon features done in the Pixar-DreamWorks-BlueSky mold. It also bears the pedigree of a French entertainment conglomerate, Gaumont, and its technical credits are filled with Gallic names. So there’s every reason to hope for something more than the same-old, same-old; something culturally specific and visually exciting; something with an active brain and a beating heart—if not an eccentric gem like “The Triplets of Belleville” or “A Cat in Paris,” then maybe a crowdpleaser that’s as simultaneously accessible and endearing as a second-tier Pixar release like “Finding Dory” or “The Good Dinosaur.”

No such luck. Co-directors Éric Summer and Éric Warin and their collaborators seem determined to crush the life out of an original premise and many promising characters by stealing every available page out of a substandard American studio animated feature’s playbook, from nonstop CGI-powered, 3-D animation clichés (montages set to contemporary power-pop ballads; gratuitous "slow motion" to highlight big moments; “helicopter shots” pointlessly flying around buildings and characters) to lead characters that are written, designed and animated in such an obvious, overly emphatic way that "Leap" stands as a rare cartoon feature that can be legitimately criticized for bad acting.

Wannabe-dancer Felicie (Elle Fanning), who steals another girl’s identity to study at the Paris Opera Ballet; her fellow orphan Victor (Nat Wolff), an aspiring inventor; Felicie’s mentor and soon-to-be-mother figure, Odette (Carlie Rae Jepsen); Odette’s villainous employer Régine Le Haut (Julie Khaner); Régine’s hateful ballerina daughter Camille (Maddie Ziegler)—these and other major figures are defined entirely by their function in the film’s plot: the heroine, the best friend, the villain, and so on. But in contrast to, well, good animated films aimed at family audiences, "Leap" seems stymied as to how to move beyond those basics. It tries to pump them up with characterization substitutes, mainly piling on physical infirmities: crossed or lazy eyes; a speech impediment and gluttonous tendencies; gap teeth and a grating laugh. There’s even a one-scene cameo by a mail courier with '80s-movie, swishy-gay mannerisms. When that gambit fails, the film will latch onto bits of allegedly comic business that aren't all that funny in the first place, and become less funny the more often "Leap" repeats them.

Victor’s social and physical ineptitude, for instance, is illustrated by having him bang his head on the same church bell three times in the film’s opening section, then stumble, tumble and crash through every scene in which he subsequently appears, when he’s not stammering and stumbling over his words and then vocally chastising himself for messing them up. Odette fares slightly better, mainly because of Jepsen’s sensitive line readings and the long face and sad, dark eyes that the animators have given her. But we deduce her tragic secret the instant we meet her, and the movie, which seems averse to giving either parents or children credit for movie-going intelligence, treats her inevitable backstory-revelation as deep and powerful, when it's actually far less compelling than the relationship she develops organically with Félicie through their shared love of dance. Mel Brooks’ vocal performance as M. Luteau, the outwardly hard-nosed orphanage supervisor with a secretly soft heart, invests him with a bit of life beyond his exopthalmia and hunched-over posture; but like so many minor characters in “Leap,” he’s undercut by throwaway dialogue that sounds as if it was dropped into the soundtrack during post-production to explain things that don't need explaining. (When Luteau helps the heroine in the last act—a moment anyone who’s seen a movie before, any movie, will eagerly anticipate—Félicie exclaims “I knew you weren’t as bad as people say!”)

Félicie’s story becomes compelling anyway because it couples an expression of pure willpower with that foolproof sports-and-arts movie standby, the training montage in which new skills are practiced and mastered. The best thing about “Leap” is its portrayal of the dance world, then and now, as both exhilarating and cruel: practically an altar that fanatical young people sacrifice their bodies upon. Anybody who’s danced or been close to a dancer will testify to the emotional truth of the sequences where Odette puts Félicie through her paces, as well as to the knife-twisting comments that the Paris Opera Ballet’s choreographer Mérante (Terrence Scammell) makes as he cuts girls from a lineup of potential “Swan Lake" leads.

But “Leap” doesn’t seem to grasp how special these elements are. Rather than do its brave, tough, purehearted heroine the courtesy of concentrating on her artistic and emotional evolution and the indignities and injuries she suffers for her art, it keeps wasting her time (and ours) with theoretically comic or suspenseful subplots that we’ve seen done many times before, with considerably more wit and feeling. The love triangle between the bumbling best friend-nice guy (Victor) and the tall, blond, full-of-himself rival (Tamer Kapelian’s Rudolph), who claims to be a Russian prince, soon becomes tedious because neither young man seems charismatic enough to steal the spotlight away from Félicie’s true, great love, dance. More exasperating is the sneering, shallow hatefulness of the rival’s mother, Régine. She's been given Cinderella’s stepmother’s hell-pit eyes and fitted with a jet-black version of her tumorous hairdo, as if her constant physical humiliation of Félicie and Odette, literally her chambermaids, didn’t cement that connection for us straightaway.

The film’s misallocation of dramatic resources reaches a bizarre zenith in the finale, which delays the heroine’s understudy-who-gets-a-big-break debut (another ancient cliché that we spot from a thousand yards off, and can’t wait to see and revel in) for a long action sequence set beneath and near just-finished Eiffel Tower and the unfinished Statue of Liberty. It seems mainly interested in proving that Victor was the right guy for Félicie all along. Given how invested we’ve become in her quest at that point, despite all the prefabricated storytelling hurdles placed between her and her debut, Victor's vindication is the last thing on our minds. Félicie deserves better. So does dance. 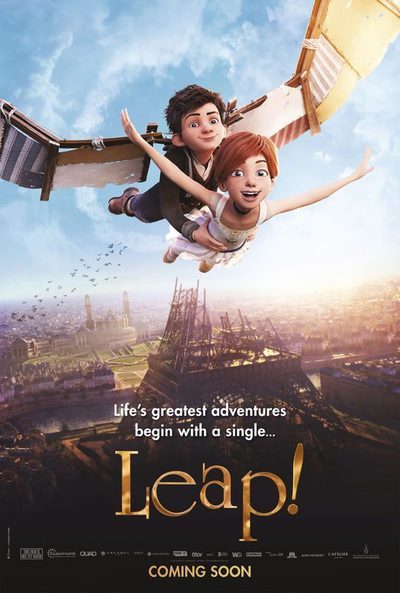 Rated PG for some impolite humor, and action.