Over the course of their first fifteen features, Pixar has made some great films (such as the "Toy Story" series, "Ratatouille" and "Inside Out") and some not-so-great ones (such as anything with the word "Cars" in the title). However, the best of them are the ones that intrigue an initial idea and elaborate upon it with the kind of well-developed characters, ingenious plots and emotional resonance that is rarely seen in films aimed at family audiences. The problem with their latest effort, "The Good Dinosaur," is that it has the intriguing initial idea but then seems curiously unsure of how to pursue it. The end result is a film that has some promising elements and which often seems as if it is on the verge of evolving into something wonderful but never quite manages to turn that particular corner.

The basic conceit of the film is undeniably promising—what might have happened if the asteroid that hit Earth 65 million years ago actually missed its target, and the dinosaurs that were rendered extinct by its impact were able to continue to thrive and evolve as a species? After a brief prologue showing that near-miss, the film jumps ahead a few million years to focus on a family of apatosaurus tending to their farm. Alas, the youngest of the bunch, the runty Arlo (voiced by Raymond Ochoa) is unable to do much and is the butt of teasing from older siblings Buck (Marcus Scribner) and Libby (Maleah Padilla), while his father (Jeffrey Wright) and mother (Frances McDormand) try to assure him that he is destined for greatness. One day, while chasing a feral child (Jack Bright) who has been stealing their crops, the fearful Arlo and his father are caught in a raging rainstorm and parents of more sensitive children better have the Kleenex ready.

While struggling to help his mother bring their crops in before winter arrives, Arlo runs across that same child, who he blames for the death of his father, and while pursuing him, the two fall into the river and are swept many miles down before washing ashore. At first, Arlo hates the kid but the boy, who not only acts like a dog but soon responds to the name Spot, eventually grows on him and the two become friends as they discover they have more in common than one might think. As Arlo and Spot begin the long and perilous journey upstream to Arlo's home, they encounter such dangers as a giant cobra and a trio of pterodactyls (whose leader is voiced by Steve Zahn) whose seemingly laid-back attitude stands in marked contrast to their desire to savage anything they can get their talons on. Somewhat friendlier are a trio of T-Rexes (with the voices of Sam Elliott, Anna Paquin and A.J. Buckley) who are, oddly enough, buffalo ranchers trying to rescue their herd from some rustling raptors.

There are some good ideas in Meg LeFauve's screenplay, such as the idea of inverting the classic boy-and-his-pet narrative so that the boy is the pet, and the way that it threatens to become a full-blown Western with the introduction of the T-Rexes (including a campfire scene complete with someone playing a mournful tune on a "harmonica"). But once it introduces them, the film tends to abandon them in order to tell yet another variation of the tale of a seeming misfit who learns to pulls himself together, and use his gifts to save the day and make his mark on the world. Much of it feels cobbled together from elements that will seem very familiar to anyone who saw the likes of "The Jungle Book," "The Lion King" and "How to Train a Dragon." The lack of a unique story might have been overcome if the characters had been compelling but alas, neither Arlo nor Spot are especially interesting.

Visually, "The Good Dinosaur" is a stunner throughout, with one breathtaking composition after another that combines gorgeously rendered photorealistic backgrounds with the more overtly cartoony characters in an unexpectedly lovely manner. There are also a number of inspired moments where the film threatens to break its shackles and go off into strange areas, like an encounter with a styracosaurus (whose deadpan voice is supplied by the film's director, Peter Sohn) who is festooned with a number of comfort animals. In another scene, Arlo and Spot eat some fruit with hallucinogenic properties that are depicted in amusing visual detail. The aforementioned campfire scene gets especially weird when it turns into, of all things, one of the most famous scenes from "Jaws." There is even one beautifully low-key moment in which Arlo and Spot, despite the lack of a shared language, manage to communicate and commiserate with each other over the loss of their respective families in a genuinely heart-tugging manner. (This moment is so strong that I wouldn't be surprised to learn that it was the initial inspiration for the entire project.)

As those who pay attention to such things already know, "The Good Dinosaur" had a famously troubled production that saw its original director and most of the original voice cast replaced, and a number of major script rewrites added in an effort to save it. With that much behind-the-scenes chaos, it is probably not a surprise that the end result is as uneven as it turns out to be. The film will satisfy younger viewers, I suppose, but unless your kids are especially gaga over dinosaurs, my guess is that even they will recognize that it is lacking a certain something that separates the great films from the ordinary ones. 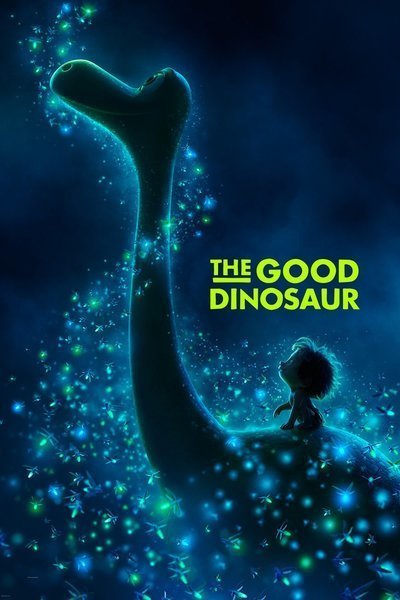