If you saw "The Hangover" and thought, "I would enjoy this film more if nothing of consequence happened, and it were clean enough to screen at a retirement home," then "Last Vegas" is custom made for your needs. Written by Dan Fogleman and directed by Jon Turtletaub ("National Treasure"), this tale of four old buddies reuniting in Las Vegas is what you might call "low-impact" comedy. There's really nothing to it except sentimental shtick.

Billy (Michael Douglas), a millionaire notorious for resisting matrimony the way most people resist drinking lye, has finally decided to get hitched. His bride-to-be is 30 years old. You don't need to know her name or anything about her because the film isn't really interested in her. She's just the pretext to get the old gang back together. Said gang includes Archie (Morgan Freeman), who recently suffered a mild stroke and is being micromanaged to prisonerhood by his well-meaning son; Sam (Kevin Kline), happily married but depressed by his loss of lust for life, and Paddy (Robert De Niro), a widower who sits at home all day moping and scowling, surrounded by pictures of his beloved. Paddy is the refusenik of the group, in theory—he and Billy had a falling out over Billy's failure to attend Paddy's wife's funeral, and this incident is rooted in a deeper conflict that the film will explain and re-explain and re-re-explain, never with any grace.

What awaits the reunited gang in Las Vegas? Luxury. Great food. Swanky entertainment. If you think this sounds like a feature-length ad for a particular city, bingo. The film's geography-based product placement is over-the-top even by the standards of self-deprecating Hollywood piffle. The gang ends up staying at the Aria, the Aria, the Aria, did I mention the Aria? I must have. The logo seems as though it's in every other shot.

The friends do what people do in Vegas when they'd rather not risk arrest or catch a disease: they gamble; they have nice meals; they walk around and take in the sights; they bicker, sometimes amusingly, sometimes tiresomely. Light and fluffy as it is, this elder fantasy could have been a minor classic had the script created four characters with convincingly detailed comic psychologies, but "Last Vegas" isn't interested in trying that hard. It offloads the burden of characterization onto its actors, and the Aria.

Freeman plays a wily gentleman who seems milquetoast and beaten by life, but was suave once, and could be again. His character's early luck at the card tables sets up the film's voyage into vacation-wealth porn, the hub of which is a penthouse suite that an oil prince might find excessive. De Niro smiles so rarely these days that you'd think he got docked ten grand every time he showed his teeth, so naturally he's the snarling killjoy of the bunch; there are a few moments where he gets to puff up his chest or use his fists, like an aging gangster in a wannabe-Scorsese flick. (At one point he decks a bullying guest played by Jerry Ferrara, a.k.a. Turtle on "Entourage." The resulting comic riff—which finds their hotel escort, endearingly played by Romany Malco, convincing the deckee that the oldsters are scary East Coast mobsters—is as funny as it is obvious.) Michael Douglas plays exactly the type of guy you'd expect Michael Douglas to play: casting him as a privileged, charming old rascal who's terrified of mortality is a slam-dunk by this point, like casting Bruce Willis as a haggard killer with regrets. Kudos to the script for teasing Douglas' mega-slick image, though: "Your teeth, your hair, even your tan is phony," Paddy growls at him.

Two actors elevate the film. One is Kevin Kline. His comparative leanness belies the notion that his character is worn out and worn down; like Freeman, De Niro and Douglas, he looks so fit for his age that you just have to take the script's word that he's succumbing to decrepitude. (There should be a word for fit older actors playing characters in decline. Maybe "oldface.") Nevertheless, you buy him, and the fact that Kline has no established persona to lean on makes his work here more impressive. His Sam—who has rather improbably been given permission to cheat by his wife (Joanna Gleason), plus a rubber and an erectile dysfunction pill—is sly as well as spry. Kline deftly underplays every scene and line, timing punchline moments so that you don't see them coming. He has an extraordinary scene late in the picture that I won't describe, except to say that it's terribly written, that it starts out unsavory and then takes a sharp right turn into ridiculousness, and that there are maybe five living actors who could make you believe it, and Kline is one of them.

The other standout is Mary Steenburgen as the independent businesswoman-turned-lounge singer character, Diana. She's the Manic Pixie Dream Dame, reawakening the slumbering youthful spirit in older suitors despite being very close to their age and making no apologies for it. Steenburgen is introduced in a cocktail lounge doing her own singing—she's excellent—and she quickly matches Kline in the scene-stealing department, bantering affectionately with De Niro's earthbound working-class guy and Douglas' Mr. Moneybags. "You're not as charming as you think you are," she tells him, with a sing-song delivery that turns an insult into a dare. It's a shame that "Last Vegas" didn't give Diana more screen time—it would have been nice to hear a woman's version of the anxieties afflicting our four grey-haired dudebros, or get a sense of her personality apart from her function in the Diana-Paddy-Billy triangle—but she's still a kick. You never see a 60-year-old female movie character who's desirable not despite her maturity, but because of it.

There are a few sharp old-guys-still-got-it jokes, including a priceless bit involving rapper 50 Cent as the gang's neighbor in the Aria, the Aria, the Aria, I say the Aria. There are many more corny or clumsily staged bits, and a few that verge on mortifying (including a scene in which the heroes judge a bikini contest emceed by LMFAO member RedFoo, who gives De Niro a lap dance).  The picture begins vanishing from the memory the instant that its final credits roll, and  everyone involved is probably fine with that. "Last Vegas" is ninety minutes of scenery with a few bright moments, starring actors you like, plus the Aria. 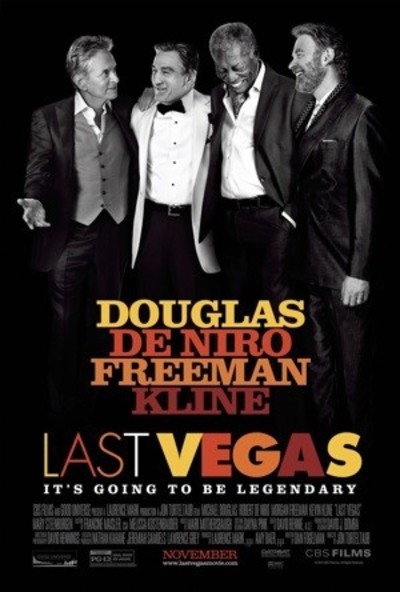