Kubo and the Two Strings

One of the most impressive elements of “Kubo and the Two Strings”—besides its dazzling stop-motion animation, its powerful performances and its transporting score—is the amount of credit it gives its audience, particularly its younger viewers.

The Oregon-based animation house Laika has demonstrated a delightfully dark sense of humor and a taste for twisted storytelling in its previous offerings, “Coraline,” “ParaNorman” and “The Boxtrolls.” In “Kubo and the Two Strings,” the directorial debut of Laika CEO Travis Knight, the lead character faces deadly peril from the very first moment we see him. The young Japanese boy who gives the film its title learns early on that the world can be a cruel place, that family can’t necessarily be trusted and that he’ll frequently have to function as the grown-up in the equation when his ailing mother is incapable of doing so.

The script from Marc Haimes and Chris Butler (from a story by Haimes and Shannon Tindle) has faith that kids can handle such tough stuff and never talks down to them. But Knight and his massive team of animators have packaged these weighty, complex themes within visuals that are just jaw-dropping in both their beauty and craftsmanship. A decade in the making, “Kubo and the Two Strings” is both painstakingly detailed and epic in scope. Inspired by a multitude of Japanese art forms, it’s textured yet crisp, frighteningly dark yet radiant with bold color. It’s a classic hero’s journey full of action and adventure, but it’s also an intimate fable about love and loss, magic and memory.

Above all else, “Kubo and the Two Strings” is fittingly about storytelling and its capacity to transform and connect us. The timelessness of the film gives it an overall feeling of cinematic grace, with obvious nods to greats ranging from Kurosawa and Miyazaki to Spielberg and Lucas. The resonance of the performances from its excellent voice cast gives it an immediate emotional punch.

“If you must blink, do it now,” the plucky Art Parkinson (of “Game of Thrones”) warns us as the title character. And there is a ton to take in here on every level. Kubo’s mother faced down fierce waves while fleeing her family to protect her newborn son, whose grandfather plucked out his left eye in a vengeful rage. Years later, in a dramatic cliffside cave overlooking the ocean, Kubo lives a quiet life with his fading mother, a once-powerful witch whose true self returns when she tells him stories of his late father, the valiant samurai Hanzo. There’s a great sense of melancholy to these early moments as Kubo struggles to see glimmers of the mother he once knew. While his loneliness is palpable, his resilience is heartbreaking.

With long bangs covering his eye patch, Kubo leaves the cave every day to spin his own magic in the town square, where he plucks his lute-like shamisen and brings his elaborate origami figures thrillingly to life. These brisk melodies provide the basis for Dario Marianelli’s soaring and deeply moving score. George Takei and Brenda Vaccaro, meanwhile, are among the actors lending their voices to the locals who help create a sense of place.

But Kubo’s mother has warned him that he must return home each day before the sun goes down or else his grandfather, the Moon King (Ralph Fiennes), will come after him for his other eye with the help of Kubo’s twin aunts, both of whom Rooney Mara voices with chilling detachment. (Parents thinking about taking your kids to see “Kubo and the Two Strings”: There are several images they might find unsettling, but the sisters are the scariest of all. Imagine the twins from “The Shining,” floating above the ground in black hats and capes and Japanese Noh masks.)

One late afternoon, Kubo gets caught up in the emotion of the Obon Festival, which honors the souls of the deceased. He stays out too late and quickly becomes prey, forcing his mother to use the last bits of her magic to rescue him. When he regains consciousness, Kubo finds himself in a harsh, snowy expanse, and the wooden monkey charm he carries everywhere has become a living, breathing, talking monkey named, well, Monkey. Charlize Theron does beautiful voice work as Kubo’s no-nonsense protector; she brings deadpan humor as the much-needed voice of reason as well as a warrior’s honor and honesty.

The two eventually meet up with a beetle named, well, Beetle (Matthew McConaughey)—actually, he’s half-man, half-beetle—who was a protégé of Hanzo’s. While Monkey is all business, Beetle is an endearingly forgetful if well-intentioned goofball. He certainly lightens things up in this intense affair, but the banter between Beetle and Monkey veers into a hokey, forced jokiness that’s at odds with the film’s prevailing sense of truth. The ever-versatile McConaughey is game for the adventures that await, but the dialogue he’s often saddled with is a rare weak link.

Together, the trio must find three crucial pieces that belonged to Hanzo: The Armor Impenetrable, The Sword Unbreakable, The Helmet Invulnerable. Only then can they defeat Kubo’s enemies. This being a quest, they must endure a series of battles on the way to the climactic conclusion. The most awesome of these, both from a technical and narrative perspective, is the towering, fearsome skeleton with swords sticking out of its skull. (Stay in your seat during the closing credits for a glimpse of what it took to create this creature.) But the ship Kubo whips up using the power of his music and a pile of leaves is just as impressive in its delicate beauty.

The fact that these two extremely different but equally inspired images can co-exist within the same film—a film that’s as poignant for adults as it is entertaining for children—is nothing short of magical. 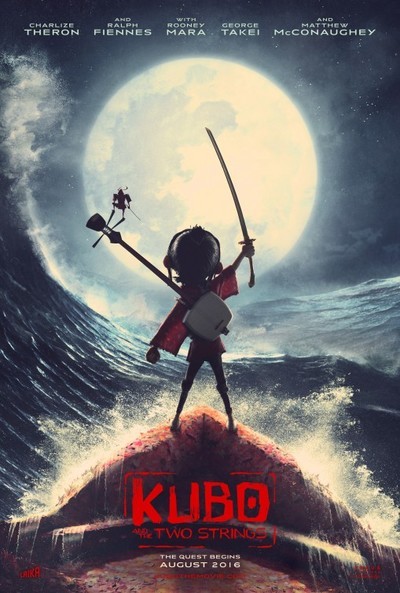