When it comes to road-trip movies, the “getting there” part of the journey is generally more important than the “you have reached your final destination” ending. “Kodachrome,” alas, too often travels a well-worn and predictable highway, one that was traversed to near-perfection not too long ago by Alexander Payne’s “Nebraska.” That 2013 Oscar-winner had Bruce Dern’s alcoholic patriarch riding shotgun next to Will Forte as his estranged son. They shared in a boondoggle of a car excursion from Montana to the Midwest to collect pop’s supposed winnings from a sweepstakes scam. Their stops along the way filled in the blanks of their past with the assistance of relatives and friends of varying degrees of eccentricity.

Director Mark Raso’s “Kodachrome” doesn’t stray much from this predecessor, save for the more upscale, urban and artsy status of its central characters: A wayward, world-famous photographer dad, Ben (Ed Harris), and his distant music-exec adult child, Matt (Jason Sudeikis), who is on the verge of being fired from his label. That his father is in the last stages of liver cancer and has only months to live make the mission they embark upon all the more fraught. At issue are four mystery canisters of Kodachrome film that Ben, as analog as they come, has just discovered and he wants to get them developed in order to put on one final exhibit of his work. But the only photo lab that still processes Kodachrome is located in Parsons, Kansas—and it is just days away from closing up shop.

Joining them on their ride is Zooey, Ben’s loyal nurse and assistant, who initiates the reunion and assumes the role of put-upon go-between for the two reluctant companions (also convincing Matt to join them is Dennis Haysbert as Ben’s manager, who dangles the bait of a meeting in Chicago with a hot band he wants to sign). That Zooey is played by Elizabeth Olsen, as fierce as she is fetching, pretty much preordains her to eventually become entangled with lovelorn Matt sooner or later once he lets go of his hostility. This trio of more-than-capable actors is the heart of the story—especially Harris, who knows from difficult cut-off artist types after "Pollock" and eschews cheap sentiment—but it takes a while for them to untangle their character’s conflicts and bounce off one another. Not helping matters is the film’s soundtrack that is filled with lulling ballads that seem to be plucked from a collection that might be labelled “Emo Music for Long Drives in a Vintage Convertible.”

And, in case you are wondering, the Paul Simon song “Kodachrome” does not make the cut, although it does get namedropped early on.

Part of the problem is that Jonathan Tropper’s screenplay has a competing secondary motive as it mourns what has become lost in the digital age. A 2010 article in the New York Times about the cult of Kodachrome and how hordes of fans descended upon the lab was the impetus for him to create his story, which is why Ben rails against nothing being physically present anymore while being turned into “data” and “electronic dust.” Matt, sensing the irony of his statement, punches back: “What is the point of having an artifact if you never see it with your own eyes.” He adds for extra measure, “You just never saw me. Not once.” Such over-reaching to milk a metaphor does not do “Kodachrome” any favors.

With each pit stop, however, Zooey and Matt begin to warm to each other a little more. The ice finally breaks once they pay a surprise visit to the suburban home of Ben’s younger brother, Dean (that’s Bruce Greenwood behind that massive gray mustache), who raised Matt after his mother died when he was 13. They find common ground over his boyhood vinyl collection (question: why are the bedrooms of grown children in films always preserved as shrines? Doesn’t anyone turn them into an office or a guest room?) He enquires about her youthful tastes and her choice of The Smiths and The Pixies passes muster. But Ben—a self-proclaimed “miserable asshole”—is a harder nut to crack, especially after Dean’s wife (Wendy Crewson) is forced to reveal a long-held and hurtful family secret.

It’s when they reach Chicago that the emotional compass begins to right itself as Ben offers Matt some sage paternal advice and Matt puts his own best interests aside to stand up for his father. Unlike “Nebraska,” “Kodachrome” saves its bonanza of male bonding for its last half-hour or so before reaching a waterworks-worthy climax that draws out the best in both male leads.

One last observation: For a movie bent on extolling the virtues of outdated innovations that are on the verge of extinction, it is rather amusing that streaming service Netflix is distributing “Kodachrome” while its end credits proudly proclaim that it was shot on 35mm Kodak film. Maybe the past and present can live in harmony occasionally. 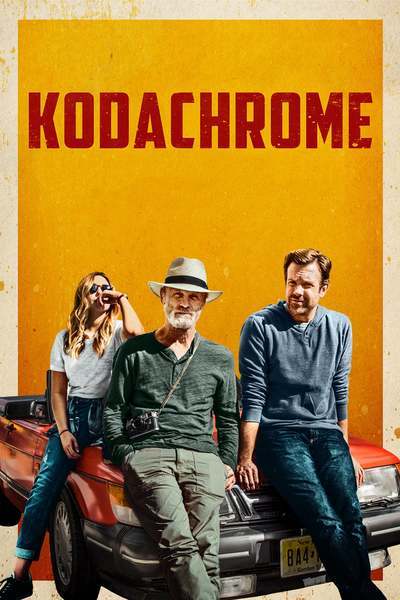