Keeping Up with the Joneses

“Keeping Up with the Joneses” is basically a revamp of the old Touchstone Pictures formula with some interesting underwear thrown into the mix for good measure. Touchstone, you will recall, was the Disney production entity that hit it big in the ‘80s by taking actors who were familiar faces but had either not yet proven their box-office potential or had slid from the heights they had once attained, sticking them in high-concept vehicles that could be easily summed up in a 30-second ad and which did not cost a lot to produce and then sat back and raked in the dough. Occasionally an excellent film would emerge (such as Paul Mazursky’s hilarious “Down and Out in Beverly Hills,” Barry Levinson’s wonderful “Tin Men” and Martin Scorsese’s underrated “The Color of Money”), but, for the most part, the results were oftentimes kind of dumb, instantly forgettable (Ask yourself—when was the last time you actually thought about “Outrageous Fortune”?) and made you wish that you could see the participants in a project worthy of their talents. That is exactly the sensation I had while watching this film, a wildly inconsequential action comedy that contains a couple of genuine laughs but which otherwise feels like an extended version of its own television ads.

Zach Galifianakis and Isla Fisher star as Jeff and Karen Gaffney, an ordinary suburban couple who, having dropped off their kids for summer, are about to sink back into the comfortable rut that is their lives—he is the singularly unhelpful HR guy at a local aerospace plant who believes that there is no problem that cannot be solved with a rubber stress ball and she is an interior designer with what appears to be only a single client. (Don’t worry—the client’s requests are wacky.) Some interest is generated when the vacant house across the cul-de-sac is purchased by a mysterious buyer, and it quickly skyrockets when the new owners turn out to be Tim and Natalie Jones (Jon Hamm and Gal Gadot), an impossibly glamorous and accomplished pair who have traveled the world, done the most exciting things imaginable and have now chosen to settle down at last. Put it this way—Tim even blows his own glass for the knickknack that he presents Jeff and Karen as a gift.

The Joneses seem like the perfect neighbors at first, but Karen becomes suspicious after a neighborhood block party where Natalie is just a little too perfect for her own good, and she catches Tim snooping around in Jeff’s den. At first, Jeff shrugs off the suggestion that something could be off with his new friend, but they quickly come across proof that the Joneses are not who they claim to be. This revelation only gets them into the kind of trouble from which only Tim and Natalie can rescue them via a lengthy shootout and car chase before revealing that they are top secret government agents trying to ferret out someone who is trying to acquire top-secret computer chips that could prove to be dangerous in the wrong (i.e. non-U.S.) hands. And since this is a wacky comedy, it goes without saying that Jeff and Karen will find themselves playing a key part in this extraordinarily dangerous business even though it seems that it would have made more sense to simply have a couple of competent field agents take their places instead.

In essence, “Keeping Up with the Joneses” offers viewers a narrative that appears to have been constructed out of elements taken from Joe Dante’s brilliant black comedy “The Burbs,” the somewhat less brilliant “Central Intelligence” and the recent run of “Sally Forth” strips in which she and her husband drop their spooky kid off at summer camp and then struggle to distract themselves from having to deal with spending more time with each other. As concepts go, this isn’t necessarily a horrible one but screenwriter Michael LeSieur never bothers to do much with it beyond employing the broadest possible strokes, and when he does hit upon something that looks as if it could be potentially fruitful—such as Jeff’s certainty that his bland platitudes contain real wisdom or Tim’s increasing disenchantment with his job and the fact that virtually everything about his life is literally a lie—he quickly abandons it for more of the silly stuff. In the past, director Greg Mottola has made such smart and engaging comedies as “The Daytrippers,” “Superbad” and “Adventureland,” and while his work here is smooth and professional enough, he never manages to figure out a way to make it into anything more than a very long episode of the kind of sitcom that only remains on the air because it is sandwiched between two infinitely more popular shows. And while it is never a good idea to attempt to apply real-world concerns to what is essentially cartoonish in nature, the unquestioning attitude that it displays towards spying (including a wacky scene in which people are threatened with torture in order to divulge information) is slightly off-putting.

The film has a good cast but it does none of them any favors. I confess that I am not exactly the biggest Zach Galifianakis fan around but I have enough appreciation for his oddball brand of humor to wonder what he is doing in a role that could have been easily filled by the likes of Kevin James without anyone noticing. Likewise, Isla Fisher can be very funny as well but her part here doesn’t really give her much of an opportunity to shine either. Gal Gadot may have been the only bearable thing in “Batman Vs. Superman” in her few scenes as Wonder Woman but she is kind of wasted here in a role in which her only remotely memorable scene is the one in which she stands around in sexy lingerie for several minutes. The one who comes off the closest to unscathed here is Jon Hamm, who has demonstrated his considerable comedic chops over the years via his appearances on “30 Rock” and “Saturday Night Live” and manages to make most of the material he has been given to work with here seem funnier than it actually is.

“Keeping Up with the Joneses” has a few mild laughs here and there—some of the otherwise rote dialogue is punctuated by amusingly weirdo curlicues and the revelation of the name of the film’s big villain is pretty funny despite the essential dopiness of the joke—and I have the feeling that it might wind up playing better on television, where all the sitcom trappings might seem more at home. As a prospect for going out one night and paying money for tickets and parking and popcorn in order to see it, however, it comes up decidedly short, and if any of your own neighbors suggest otherwise, you might want to begin looking upon them with what will be perfectly founded suspicion. 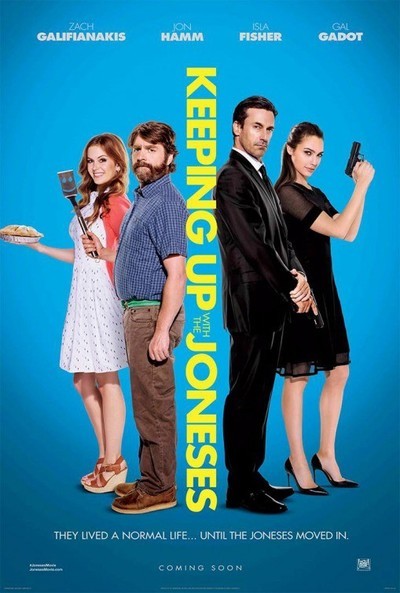