Objects in 3D are closer than they appear

Back in 1993, what was astonishing in "Jurassic Park" were the special effects that seemed to bring dinosaurs back to life. Two decades later, rediscovering Steven Spielberg's mastery of cinematic storytelling is the best reason to go see it again.

It is back in theaters with the best 3-D conversion I've seen, avoiding the cheesy Viewmaster effect too often the result of retrofitted 3-D. Other than a few shots where the foreground is blurred, the effects are immersive and organic, and the dinosaurs-jumping-toward-you moments are sparing and effective.

My favorite moment has always been when the characters in a Jeep are trying to outrace the charging T-rex. All of a sudden, we see a toothy dinosaur coming at them fast and angry in the side-view mirror. It takes a moment for the words to register: "Objects in mirror are closer than they appear." Spielberg has found a way to make us laugh and ramp up the tension. And it is even more compelling in 3-D.

The film holds up remarkably well, other than the computers and walkie-talkies, which will seem to today's audiences almost as prehistoric as the paleolithic creatures. But its then-state-of-the-art special effects, a combination of mechanical creations and computer images, are still as believable as the high-techiest creatures onscreen today.

Spielberg has gone on to weightier and more prestigious projects, but this thrill ride is one of his best and a masterpiece of the genre. It shows his unparalleled gifts for pacing and for the visual language of movies, and his ability to make us invest in the characters. That is what makes all the special effects pack an emotional wallop. He conveys more with ripples in a glass of water than most filmmakers can with 15 pages of dialogue.

The story, based on a book by the late Michael Crichton, begins with hubris, the sin of pride so great that a man places himself with the gods and thus sets the stage for his downfall. John Hammond (Richard Attenborough) dreams of extracting dino and plant DNA that has been trapped in amber and using it to reboot prehistoric species of flora and fauna. Spielberg grounds the story with a moral core that lets us enjoy the catastrophic destruction without any inconvenient pangs of conscience.

Spielberg also makes sure we have someone to root for, lining up our loyalties with characters we can both identify with and admire. Laura Dern and Sam Neill play experts in paleolithic animals and plants who are (1) interested in science, not money and (2) in love. That's all we need to know. But just to make sure, he adds in a few children, who not only get our protective instincts going but give Neill's character a chance to grow.

Go to see "Jurassic Park" in 3-D. Go to take your kids who were not born when it was released. Go to see it the way it should be seen, on a big screen in a theater filled with happily terrified fans. Go to see Samuel L. Jackson before he was Samuel L. Jackson But most of all, go for the delight of watching pure Spielberg movie magic. 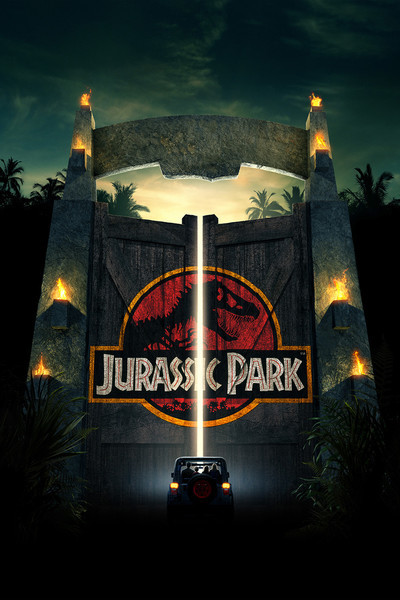