In the pantheon of Disney movies based on Disney theme park rides, "Jungle Cruise" is pretty good—leagues better than dreck like "Haunted Mansion," though not quite as satisfying as the original "Pirates of the Caribbean."

The most pleasant surprise is that director Jaume Collet-Serra ("The Shallows") and a credited team of five, count 'em, writers have largely jettisoned the ride's mid-century American colonial snarkiness and casual racism (a tradition only recently eliminated). Setting the revamp squarely in the wheelhouse of blockbuster franchise-starters like "Raiders of the Lost Ark," "Romancing the Stone" and "The Mummy," and pushing the fantastical elements to the point where the story barely seems to be taking place in our universe, it's a knowingly goofy romp, anchored to the banter between its leads, an English feminist and adventurer played by Emily Blunt and a riverboat captain/adventurer played by Dwayne Johnson.

Notably, however, even though the stars' costumes (and a waterfall sequence) evoke the classic "The African Queen"—John Huston's comic romance/action film starring Humphrey Bogart and Katharine Hepburn; worth looking up if you've never watched it—the sexual chemistry between the two is nonexistent, save for a few fleeting moments, like when Frank picks up the heroine‘s hand-cranked silent film camera and captures affectionate images of her. At times the leads seem more like a brother and sister needling each other than a will they/won’t they bantering couple. Lack of sexual heat is often (strangely) a bug, or perhaps a feature, in films starring Johnson, the four-quadrant blockbuster king (though not on Johnson’s HBO drama "Ballers"). Blunt keeps putting out more than enough flinty looks of interest to sell a romance, but her leading man rarely reflects it back at her. Fortunately, the film's tight construction and prolific action scenes carry it, and Blunt and Johnson do the irresistible force/immovable object dynamic well enough, swapping energies as the story demands.

Blunt's character, Lily Houghton, is a well-pedigreed adventurer who gathers up maps belonging to her legendary father and travels to the Amazon circa 1916 to find the Tears of the Moon, petals from a "Tree of Life"-type of fauna that can heal all infirmities. She and her snooty, pampered brother MacGregor (Jack Whitehall) hire Frank "Skipper" Wolff (Johnson) to bring them to their destination. The only notable concession to the original theme park ride comes here: Wolff's day job is taking tourists upriver and making cheesy jokes in the spirit of "hosts" on Disney Jungle Cruise rides of yore. On the mission, Johnson immediately settles into a cranky but funny old sourpuss vibe, a la John Wayne or Harrison Ford, and inhabits it amiably enough, even though buoyant, almost childlike optimism comes more naturally to him than world-weary gruffness.

The supporting cast is stacked with overqualified character players. Paul Giamatti plays a gold-toothed, sunburned, cartoonishly “Italian” harbor master who delights at keeping Frank in debt. Edgar Ramirez is creepy and scary as a conquistador whose curse from centuries ago has trapped him in the jungle. Jesse Plemons plays the main baddie, Prince Joachim, who wants to filch the power of the petals for the Kaiser back in Germany (he's Belloq to the stars' Indy and Marion, trying to swipe the Ark). Unsurprisingly, given his track record, Plemons steals the film right out from under its leads.

Collet-Serra keeps the action moving along, pursuing a more classical style than is commonplace in recent live-action Disney product (by which I mean, the blocking and editing have a bit of elegance, and you always know where characters are in relation to each other). The editing errs on the side of briskness to such an extent that affecting, beautiful, or spectacular images never get to linger long enough to become iconic. The CGI is dicey, particularly on the larger jungle animals—was the production rushed, or were the artists just overworked?—and there are moments when everything seems so rubbery/plasticky that you seem to be watching the first film that was actually shot on location at Disney World.

But the staging and execution of the chases and fights compensates. Derivative of films that were themselves highly derivative, "Jungle Cruise" has the look and feel of a paycheck gig for all involved, but everyone seems to be having a great time, including the filmmakers.

In theaters and on Disney+ for a premium charge starting Friday, July 30th. 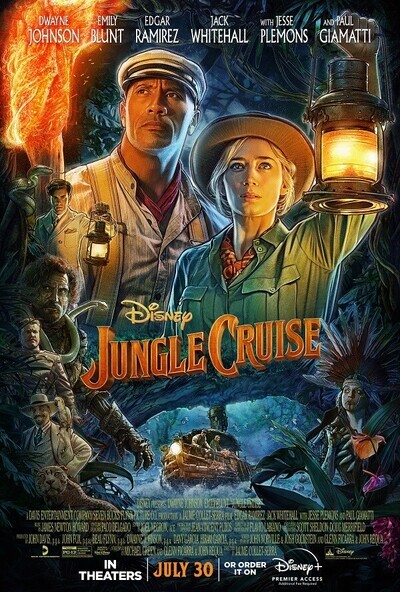