The heart wants what it wants, and sometimes what it most desires is an inanimate structure that’s secretly sentient and with more charisma than some of Hollywood’s insipid leading men. For her bizarrely romantic first feature, Belgian director Zoé Wittock delivers an approximation of “The Shape of Water” (or other films about creature/human couples) where instead of an anthropomorphic amphibian the love interest is a fair ride.

French actress Noémie Merlant (one of the glorious stars of “Portrait of a Lady on Fire”) plays small town introvert Jeanne. Not too keen on people, she enjoys her graveyard shift cleaning the local amusement park, which she’s visited since childhood. Alone one night, Jeanne discovers that the “Move It,” a large spinning attraction, is alive. Since this encounter rings reminiscent of that with a Transformer, one almost expects it to speak like Optimus Prime, but then we are glad it doesn’t.

Jumbo, what Jeanne names it to further assert its humanity, communicates via spirited circular movements, dark secretions, and the colorful light bulbs that adorn it. Banter between them quickly evolves to their own peculiar, and oily, interpretation of sexual intimacy. Think of a muted, R-rated version of the Transformers franchise, or more specifically 2018’s spin-off “Bumblebee”: woman and machine elope while the rest of the world is unaware of the secret life of motorized vehicles from outer space.

Once their connection is established, Wittock leaves no room for ambiguity about whether Jumbo is real. He exists and Jeanne’s feelings are reciprocated, so the obstacle lies in getting acceptance from her lonely mother Margarette (Emmanuelle Bercot). Committed to the central relationship, the writer/director never makes this a movie about mental health, even if Margarette or Jeanne’s flesh-and-blood, infuriatingly persistent suitor Marc (Bastien Bouillon) question the heroine’s sanity.

Such narrative determination works for the “against all odds” passion on display, but it also seems to deter Wittock from expounding on the mechanics of this fictional world. No one knows why Jumbo is the only conscious ride or if others would also come to life if someone loved them. The screenplay plays within a limited box in order to not push too hard into any direction that would put into question the reality of this romance.

Merlant’s utter sincerity in enacting how Jeanne handles this emotional rollercoaster (pun absolutely intended), including the rejection it brings her, convinces us of the character’s devotion. With few words but outbursts of anguish, the actress manifests the fervor of young love. Merlant loses herself in the role so intensely that it’s impossible not to empathize with her and Jumbo, as strange as the premise remains throughout. She sells it without an ounce of cynicism. Bercot’s neurotic portrayal of a matriarch contrast strongly with her daughter’s demure persona.

To preserve that earnestness Wittock then sidesteps introspection, and restricts character development to Jeanne’s aptitude for creating scaled mechanical designs in her room. Afraid, perhaps, that if we get to know her more profoundly, we might wonder if there’s trauma igniting a delusion. By the same token, the town’s dynamics are also thinly drawn—including a band of kids who taunt Jeanne and seem to visit the park every day.

Aside from Merlant’s performance, this inter-material relationship between flesh and metal is made spellbinding by cinematographer Thomas Buelens’ work in scenes where Jeanne rides on Jumbo or addresses its flat center (the closest thing to a face). As she rides or stares at her massive lover, she basks in the radiant patterns of its lights in motion. That striking, nearly hypnotic imagery calls to mind a meeting between an EarthLink and a spaceship. Jumbo has personality, and that’s a major feat accomplished entirely through the film’s visual language.

Those moments of dazzling bonding have greater impact than the one dreamlike sequence showing a semi-naked Jeanne in a white space being swallowed by a dark liquid (machinery lubricant) similar to the feeding scenes in “Under the Skin.” Because the validity of their union is never in doubt in Jeanne’s eyes, “Jumbo” functions as a straightforward allegory for the notion that love is love. If a large piece of entertainment machinery can awaken such unabashed affection from her, then surely all other, consensual human liaisons should be seen as orthodox.

In the movie's final throes, the filmmaker mystifyingly shifts tone from alluring drama to cheeky comedy. Furthermore, the story solves the conflict of parental approval through a supporting character that enters as the voice of reason yielding a muddled resolution. Though curiously charming, “Jumbo” behaves like love at first sight that doesn’t think about the consequences of the ardent now or the larger, long-term picture. 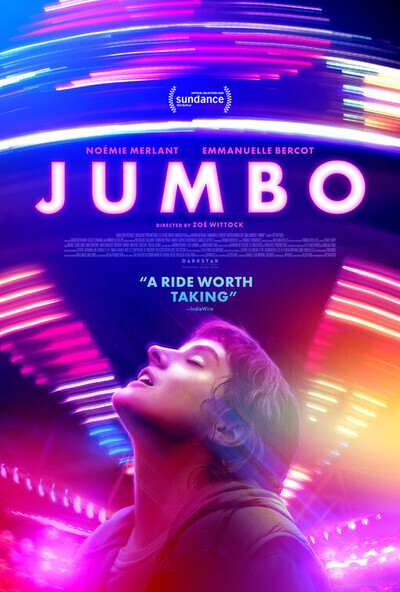