Portrait of a Lady on Fire

French writer/director Céline Sciamma has hypnotizing powers—her spellbinding pull was unmissable in both the sensual “Water Lilies” and the gleaming coming-of-age tale “Girlhood.” With “Portrait of a Lady on Fire,” she takes that cinematic magnetism to new heights and periods, to a cliffside manor somewhere on the coast of Brittany in the 1770s. Imbued with a buttery-matte palette and resolute, painterly strokes of camera throughout—lensed by Claire Mathon with patient tenacity—Sciamma’s latest tells the tale of a dreamy romance. It’s a delicate drama that flourishes through the liberating power of art, where a hopeful yet consuming love affair sparks between two young women amid patriarchal customs, and stays concealed in their hearts both because of and in spite of it.

This forbidden love (“forbidden” in the world that surrounds them, but so instinctive and inevitable to the pair) might just be the sexiest affair you’ll get to see on cinema screens this year, or since ... I can’t even remember. This is thanks in large part to Sciamma’s well-considered decisions on what to show versus how much to obscure in scenes of unreserved intimacy. In fact, she is so deliberate in her “Portrait” that one cannot ignore the filmmaker’s oblique opposition to the cold and soft-core sex scenes of "Blue is the Warmest Color," another love story of the recent LGBTQ canon, but one shot from the unfortunate POV of the male gaze (an admittedly overused but fitting term here.) In that, it’s not the secret bedroom trysts that Sciamma’s film renders the most erotic. It’s the suggestive longing, the camera’s respectful caressing of the skin, the studious stares that the two women get locked in that prove to be the most rousing. These gazes—first, exchanged out of obligation, then, cherished more and more—are stirring, simply because the lovers-to-be have no choice but to dwell in their private safety when any kind of sexual release seems out of the question for them.

And these wordless adorations are also thrilling, as they are what defines the start of their relationship. At first, it is an unsympathetic deal that is centered on Héloïse (Adèle Haenel of “Nocturama” and “The Unknown Girl”), but set in motion by her mother (played by veteran actor Valeria Golino) despite her daughter’s passive-aggressive protests. Héloïse is an unwitting bride-to-be, about to be wedded to some noble man in an arranged marriage. Marianne (Noémie Merlant) is an artist and for-hire painter, brought to Héloïse’s remote home to paint a dignified portrait of her to be sent to her future suitor, as per a pre-marital tradition. The twist is the uncooperative Héloïse’s stubbornness—she is kept in the dark about Marianne’s task, and instead, is fed a story that the painter is only there to keep her company during her daily seaside walks.

Meanwhile, Marianne has to take in as much of Héloïse’s face and figure as possible, before transposing them onto a canvas from memory in secret. But this impossible method only produces a less-than-ideal (and frankly, a bit too conventional and square) image of Héloïse. It is when the truth comes out, when the ladies finally break out of their tight corsets (metaphorically at first, and in reality later), that Héloïse’s reflection on the stretch of cloth assumes her soulful likeness; in order words, the way Marianne starts to see her.

There are traces of Jane Campion’s poetic elegy “The Piano” here—another love story that unites an improbable pair through the sweeping splendor of art. You can also call “Portrait” a Vermeer-touched “Carol,” with its smooth textures, layered compositions, and romantic touches of chiaroscuro lighting. These contrasts of shadow and luminosity are most pronounced in the dark corners of the house’s country kitchen, and especially heightened during a nighttime centerpiece featuring an unforgettable piece of a cappella singing around a bonfire—so enthralling that the sequence feels and sounds like sexual climax.

But above all that, “Portrait of a Lady on Fire” is its own, wondrous, magnificent thing; a complete artistic vision where every directorial step is refined and each thematic probe, seamlessly weaved in. So when Sciamma generously brings in the storyline of Sophie (Luàna Bajrami), a maid in need of abortion, the film doesn’t venture out of its scope. Instead, this thread unites the patriarchy-defying themes of “Portrait,” while slowly building a sense of sisterhood within the confines of a remote home that lives under the shadow of unseen men. With a heartbreaking, “Call Me by Your Name”-esque finale that consumes Haenel’s emotive face (you will never hear the “Summer” section of Vivaldi’s “The Four Seasons,” a recurring motif, in the same way again), Sciamma’s gift to 2019 sets a highest standard for any romance that will come after it.

This review was originally published on December 6, 2019. 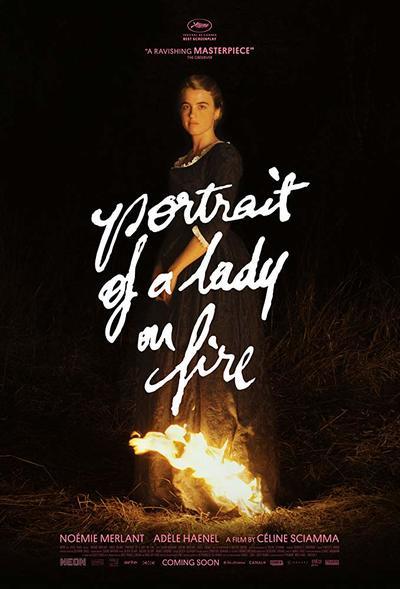 Rated R for some nudity and sexuality.