You and me and almost everyone we know inhaled the New York Magazine article about Anna Delvey back in spring 2018. With equal fervor we gobbled down the news of the criminal trial of Anna Sorokin, a con artist who changed her name and shattered the end-to-end social encryption of New York City’s most elite circles. In this era of plentiful documentaries about scammers, we cheered at news of adaptations of Sorokin’s life: a series at HBO, written by Lena Dunham, and one at Netflix, helmed by Shonda Rhimes.

The former remains in development. The latter is rife with great performances, and devoid of writing to match.

If “Inventing Anna” possesses any relevance at all, it’s due to the quality of its cast. Julia Garner is disturbingly flawless as Anna Delvey. If you closed your eyes you might well think the real Anna was speaking. Garner is a chameleon performer, disappearing into every role. There’s no evidence of mop-top Ruth Langmore from “Ozark” here, the role that has won her two Emmys and counting. Her mastery of Sorokin’s bizarre accent—part German, part Russian, part every Bond villain ever—has an Emmy nomination in its future too. The sole parallel to Garner’s performance that came to mind was the bone-chilling fear I felt after watching “The Jinx,” Andrew Jarecki’s documentary about the now-deceased convicted murderer Robert Durst. Sorokin hasn’t killed anyone (yet), but like the farting, blinking failson killer, she too assumed she’d get away with it all because she was smarter than everyone around her.

Other bright lights: Laverne Cox is pitch-perfect, and radiant, as personal trainer Kacy Duke, who charged Sorokin $4,500 for workout sessions, and narrowly avoided being marooned in Marrakech with her weird client and Vanity Fair photo editor Rachel Williams. Very little ruffles Kacy’s preternatural calm, but there’s a great moment when she says during a heated confrontation, “This is shock. You’ll know when I’m angry.” Rachel, the author of her own Anna Delvey story, is played by Katie Lowes, but because the show is largely pro-Anna and anti-Rachel, this is a thankless job, and Rachel comes off as a schemer too, just one less—or more, depending on your point of view—successful than Anna. Arian Moayed plays Stewy Hosseini on “Succession,” but provides beautiful, sincere warmth in his role as Sorokin’s defense attorney Todd Spodek. Kate Burton and Anthony Edwards have lovely, understated arcs, and Ben Rapaport pops by to play one Billy McFarland, who, briefly, was Anna’s roommate. He eagerly pitches the idea of a music festival to her; she scoffs, and declines to invest.

But the show’s scene stealer (and, I hope, its breakout star) is Alexis Floyd, whose performance as Neffatari Davis is truly magnetic. A former concierge at 11 Howard (12 George on the show), one of New York City’s chicest boutique hotels, Neff was a crucial part of Sorokin’s circle, and her only friend. She was tipped in $100 bills for arranging the “V-VIP” guest’s swanky dinner reservations, car rentals, shopping services, exclusive parties. Floyd’s vivacious confidence pole vaults off the screen; you can’t help but be mesmerized by her visceral charm and vulnerability. Garner’s terrific accent work is matched by Floyd’s, who said in an interview she was familiar with Neff’s Maryland accent prior to spending time with her real-life counterpart, but also thought “about the ways Brooklyn might’ve snuck in there. And then if she is working as a concierge, you’re doing a lot of mirroring clientele.” Whatever audiences make of "Inventing Anna," I hope Floyd will grace our screens for many, many years to come.

Now, however, we must confront the writing. It does not help that Anna Chlumsky is hopelessly, horribly miscast as Vivian, a writer at Manhattan magazine and Jessica Pressler’s stand-in. As Amy Brookheimer on “Veep,” Chlumsky’s facial acrobatics were matched by the quality of the writing. On “Inventing Anna” the actress’ face is constantly in motion: furrowing, twisting, narrowing, clenching. Vivian is pregnant, and recklessly endangers the health of her unborn child by pursuing the story, reminding me, unhappily, of how writer Michelle McNamara went down a similar path to find the Golden State Killer, and never came back. Her water breaks as she writes the last sentences of her essay. Moments after filing the piece, she delivers a baby girl. Hey Shonda Rhimes, 2004 called, they want their rom-com plot back.

Vivian’s characterization grows more preposterous as the series progresses: she breaks every syllable of journalistic ethics by bringing Sorokin underwear in prison, paying for her courthouse clothes, and eventually believes that Sorokin’s lies are a vague tragic medley of mental illness, childhood abuse, and genuine delusions—that we should pity her. The writers on the show hail from “Grey’s Anatomy,” “Scandal,” “How to Get Away With Murder,” and “Bridgerton.” All incredibly popular, all with the writing quality of candy floss. It is no surprise, perhaps, that the writing on “Inventing Anna” reads like something meant for ABC, because that was Rhimes’ first TV home.

Rubbing salt in the wound is the dialogue in episodes nine and ten. My theory is that one of the writers went home after a long day and binge-watched a season of two of “The West Wing,” because what passes for courtroom banter, attorney-client discussions, and cross-examination, is right out of Aaron Sorkin’s grotesquely bloated playbook of writerly horrors. One wonders what Moayed must’ve thought, going from Jesse Armstrong and Mark Mylod, to lengthy diatribes about what an idiot Spodek’s client is but he’ll fight for her, goddammit.

In the Netflix documentary “Murder Among the Mormons,” convicted forger and murderer Mark Hoffman said his forgeries of documents and relics important to the Mormon Church weren’t that impressive, but that everyone he fooled needed to make him look like a mastermind in order to make themselves look less stupid. The same could be said of Sorokin’s marks. If you flaunt style, art history, fancy shoes and bags, a few eccentric mannerisms, a vague story about your German tycoon/Russian plutocrat father, and the $60 million trust you will inherit on your 30th birthday, they’ll believe anything you have to say, because they too want to get in on the ground floor of a profitable friendship. A story about a nobody from rural Germany, who hoodwinked the rich and famous—many of whom never even filed charges because they felt so humiliated—should be told as an excoriation of wealth and privilege. In a way, Spodek’s defense of Sorokin had a point: his client did what people do to get rich, and people believed her. Capitalism is a disease, and Anna Delvey is a mere symptom. 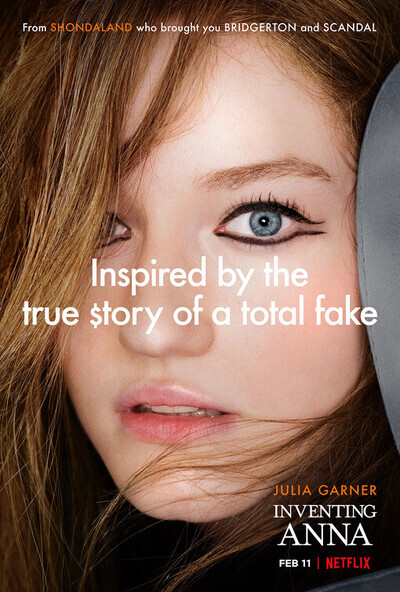