Movies about “ethnic” communities often follow a certain pattern. The first-generation member of said community struggles with the expectations of their parents, relatives, and other individuals from their same ethnic, racial, or national group. They try to chart their own path, and wonder when they can come clean about who they really are. There might be a romantic partner from someone outside the community in the mix, and there might be some kind of physical distance put between them and their family to really emphasize the “start anew” messaging.

There are many wonderful movies, particularly about South Asian protagonists, that follow some version of this—“The Namesake,” “Bend It Like Beckham,” “Hala,” “The Big Sick”—and it’s not really a surprise that films inspired by overlapping cultural experiences will end up with rough similarities to each other. (It’s worth asking why films about friction within immigrant communities and the allure of American “freedom” often seem to get financed and distributed more than others about these same groups, but that’s a question for another time.) And into this subgenre arena enters director and writer Geeta Malik’s “India Sweets and Spices,” which mimics each of those preceding films in certain ways.

Pleasant but unchallenging, “India Sweets and Spices” sets itself apart with a brief history lesson about women’s movements across India (still ongoing, like during the March 2021 farmers’ protests). That backward gaze is a solid asset, and is delivered via a layered performance from actress Manisha Koirala, well-known for her decades of work in Indian films. With minute changes in her gaze or stare, she transforms from someone acquiescing to someone resentful; with slight shifts in pitch, she conveys regret and pride. It’s a shame that she doesn’t have more scenes with the similarly formidable actress Deepti Gupta; together, they bring tangible lived experience to a film that relies on their grit and wisdom to makes its points about relocation and reinvention.

Otherwise, so many elements of “India Sweets and Spices” are laid out in unremarkable fashion. A daughter’s desire to live differently from her parents, check. The complications of her parents’ arranged marriage, check. A love interest who comes from a different walk of life from her own, check. A hidden history in the “old country” that tilts her understanding of her mother and father, check. “India Sweets and Spices” falls into familiarity from its opening minutes and then spends the rest of its run time attempting to climb back out. Some of its plot developments are too broad (a dinner party where the aggrieved party calls out everyone else on their hypocrisy, secret photos used as relationship blackmail). Some of its dialogue is irredeemably corny (“I’m not superficial, I watch documentaries!”), and some of its observations of Indian-American rituals lack insight or bite. Much of this has been done before in more stylish, more well-rounded films, and “India Sweets and Spices” suffers from those comparisons.

“India Sweets and Spices” follows UCLA student Alia Kapur (Sophia Ali) as she returns home to her parents’ extremely upper-class neighborhood of Ruby Hill, New Jersey, for the summer after freshman year. In college, she drank, she had sex, and she was able to be herself. Back in her parents’ palatial home, Alia chafes against what she construes as her mother Sheila’s (Koirala) strictness and classism, and she appeals to her father Ranjit’s (Adil Hussain) more laidback nature. But Alia’s irritation at all the pomp and circumstance only increases each Saturday night, with a dinner-party tradition that cycles through the other rich members of her parents’ friend circle. Each weekend is an opportunity for the hosts to show everyone else up—more courses, more help staff, more elaborate outfits, more lavish interiors—and Alia, with her biting asides and simmering sarcasm, is getting tired of it.

Until she ventures into the Indian grocery store and locks eyes with employee Varun (Rish Shah); the moment is so charged that, in a nod to Bollywood classics, Alia’s hair blows back from the force of their encounter. The direct, unpretentious Varun is nothing like Alia’s longtime friend Rahul (Ved Sapru), whom all the aunties think Alia is going to marry. Everything comes easy for the rich, connected Rahul, while working-class, community college-attending Varun is earthier and more appealing. So Alia makes a choice more scandalous than sleeping with Varun behind her parents’ backs: She invites his family, including shopkeeper father Gurvinder (Raj Kala) and mother Bhairavi (Gupta), to the next dinner party at her family’s house. The arrival of the family, with their nice but not ostentatious outfits and their plastic container full of homemade desserts, sends the party’s attendees into a tittering frenzy of gossip and snideness. And when it’s revealed that Sheila and Bhairavi have some kind of secret shared history, Alia finally realizes that her parents might not be exactly who they seem.

What follows in “India Sweets and Spices” is an incremental unfurling of exposed lies, betrayals, and hidden identities, and to Malik’s credit, she mostly maintains the film’s humbleness. With the community’s chit-chat as an omnipresent buzz in the background, the movie remains focused on Alia and Sheila’s relationship, and it delivers some meaningful moments between mother and daughter: a shared haircut, a quiet drive, a photograph pored over together. “India Sweets and Spices” could have benefited from a more thoughtful consideration of the traditional customs it judges (like arranged marriages) or the parental behaviors it mocks (the “model minority” trope, or jokes about the “doctor, lawyer, engineer” pressure for children’s careers). Without some of that substance, the film’s “don’t be too quiet” message feels slightly hollow. But Koirala and Gupta! "India Sweets and Spices" is worth watching for their work alone. 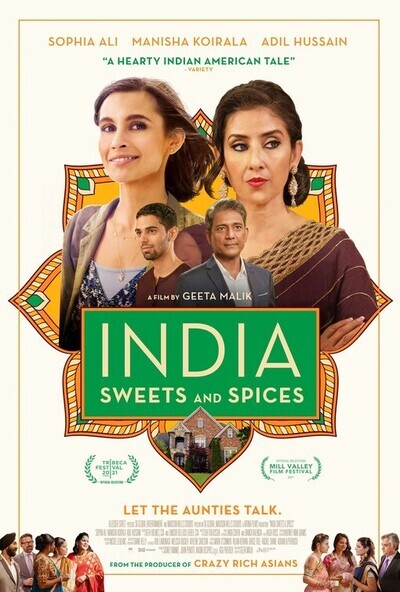