Following the ordinary beats of a teen’s everyday life, writer/director Minhal Baig’s gentle and attentive sophomore feature “Hala” possesses something inherently extraordinary by just being about a young, female Muslim-American. It’s an unassuming film that hops on a casual rhythm and shines its wisdom to let its lead character Hala (Geraldine Viswanathan) just be; by neither indulging in culture-clash humor nor miserably insisting upon her social reclusion. Patiently, Baig lets us take in all the facts about Hala: She is a skateboarder and a gifted writer. She has close female friendships with non-Muslim American girls. She wears a headscarf, harbors a deep crush towards a sweet classmate and self-fulfills her healthy sexual desires in private. These small yet pronounced brushstrokes alone set Baig’s observant picture apart from its American coming-of-age counterparts, that either haven’t yet figured out what to do with the young Muslim experience, or, on a more basic level, how to include it.

On the whole, Baig does well with her unique perspective in this largely untapped territory, even though she hits some narrative speed bumps along the way and abandons certain crucial avenues while bringing Hala’s story to a close (or rather, to a new beginning). Still, the filmmaker manages to stay firmly on Hala’s side throughout, while the senior high schooler on the cusp of college tries to reconcile her overbearing home life with the westernized values of the outside world she is enmeshed with. Her immigrant parents, Eram (Purbi Joshi) and Zahid (Azad Khan), certainly keep her under a close watch, though it’s clear they’d consider themselves a lot more modern and accepting than their peers back in Pakistan. The duo doesn’t take too kindly to Hala’s extended after-school activities, especially when they involve her budding romantic relationship with the aforesaid crush Jesse (Jack Kilmer), a kind soul and a fellow literature enthusiast.

Surprisingly, one of Baig’s greatest feats in “Hala” is the character arc she builds for Eram; a frequently complaining, tough-loving mom who at first comes across like an afterthought, a bit of an unreasonable protestor for no reason. The first instance in which we survey the family around a dining room table, Hala feels closer in spirit to one of those daddy’s girls, with her father being a sophisticated, well-educated lawyer with intellectual interests that align with Hala’s. In time however, and in a way that recalls writer Diablo Cody’s shifting perspective of the married couple in “Juno” (the initially rigid but sincere Vanessa vs. the cool yet arrogantly selfish Mark), Zahid’s egotistical masculinity comes into focus. Thus, Hala’s attitude towards her mother favorably shifts as Eram grows into her own voice. Subtly braiding this thread with Hala’s class reading of Henrik Ibsen’s thematically apt “A Doll’s House,” Baig caringly honors the journey of a lonesome woman stuck in uncompromising patriarchy.

Calling Viswanathan, who does wonders with Hala’s resulting dilemmas, a revelation here would almost do a disservice to the young actor. After all, she already proved her enthralling acting gifts through the rewarding and hilariously raunchy “Blockers,” her breakthrough. And she has the upcoming “Bad Education,” which sees Viswanathan portraying an inquisitive aspiring reporter—those of us who have seen it early at the Toronto International Film Festival back in September can confirm her equally strong presence. In “Hala,” she demonstrates her command over her craft in quieter performance shades that frequently require her to observe and emote sans words, amid her character’s competing dynamics at home and school. It’s a role that demands non-showy confidence through Baig’s bare, unflashy camera choices; and Viswanathan delivers it effortlessly.

Perhaps because Viswanathan sells Hala’s beyond-her-years maturity so well, a number of decisions made by writer Baig feel out of place. In that, you expect Hala to address the end of her heartbreakingly short romance with Jesse in more sensitive terms. Similarly, a scene between Hala and Melanie (Taylor Blim), a close, well-meaning friend unaware of her privileges, seems to be missing after Hala makes a compulsive decision involving a teacher—it makes little sense for the sensible character we got to know until then. (Meanwhile, the teacher storyline also feels unfinished.) But you will be willing to forgive these loose ends when a free Hala starts her new chapter, with her identity and faith whole and in tact. Her story will continue in your mind, as it clearly does in Baig’s heart. 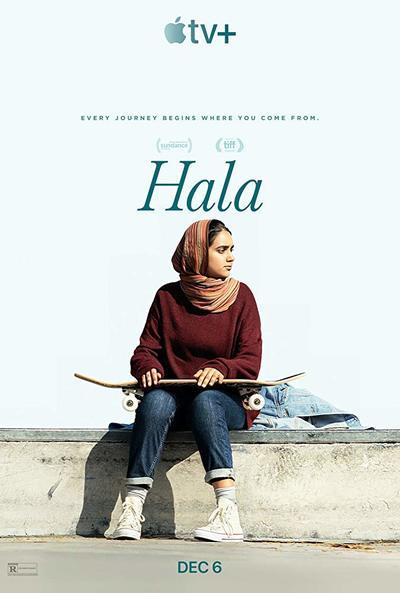