It sounds impossible—too melodramatic, too crazy—but it’s true. Actor and writer Kumail Nanjiani fell in love with his then-girlfriend, now-wife, Emily V. Gordon, when she was in a coma. It also sounds impossible that such a story would make for a crowd-pleasing comedy, but that’s exactly what “The Big Sick” is, and so much more.

Director Michael Showalter’s film defies categorization. You could call it a romantic comedy and that would be accurate, because there are indeed elements of romance and comedy. It mines clashes across cultures and generations for laughs that are specific to Nanjiani’s experience but also resonate universally. “The Big Sick” also functions as an astutely insightful exploration of how we live now with the Pakistan-born comic, starring as himself, enduring racism that’s both casual and pointed.

But the pivotal plot point in “The Big Sick” is a potentially deadly illness—hence the title—which provides not only drama and catharsis but also dark humor, and it allows the film’s characters to evolve in ways that feel substantial and real.

That’s a lot of different kinds of movies at once, and Showalter—working from a screenplay by Nanjiani and his wife, Gordon—gets his arms around all of it with dazzling dexterity. On the heels of his sweetly heartbreaking 2015 dramedy “Hello, My Name Is Doris,” Showalter once again makes tough tonal shifts with great grace. Again and again, he finds that laughter-through-tears sweet spot, often in the unlikeliest of places.

But it all starts with the script. Nanjiani and Gordon have dared to make themselves vulnerable here, allowing us an intimate glimpse into a traumatic and frightening time in their lives. They imbue moments both large and small with such an abiding honesty, though, that “The Big Sick” never feels like shameless navel-gazing. The events that ultimately brought the two together are extreme, but the depiction of them always rings true.

And Nanjiani’s front-and-center presence is a crucial component in the film’s emotional connection. Even if you had no idea "The Big Sick" was based on his real-life courtship, Nanjiani exudes an authenticity and a directness that are hugely appealing. He’s part of the ensemble on HBO’s “Silicon Valley” and he’s had a number of supporting film roles in recent years, including a particularly, um, memorable appearance as a massage therapist in last summer’s “Mike and Dave Need Wedding Dates.” But this will make him a star, and it should.

At the start of “The Big Sick,” though, the on-screen Kumail is struggling to make ends meet, working as an Uber driver by day and a stand-up comic by night. He sleeps on an air mattress in a Chicago apartment that’s a slight notch above college squalor with his needy roommate, Chris (Kurt Braunohler). One night at the comedy club, he connects with the smart and beautiful Emily (Zoe Kazan), who’d inadvertently heckled him during his set. Kazan and Nanjiani have crackling chemistry from the start, a sweet and easy banter that only grows more enjoyable the more time they spend together.

With a deadpan playfulness, they repeatedly insist they’re not dating, even though it’s clear they’re falling for each other. Emily, a grad student with plans to become a therapist, is no giggly rom-com heroine seeking approval: “I love it when men test me on my taste,” she zings when Kumail quizzes her on her favorite movies. It’s a testament to Kazan’s instincts and presence that while her character is lying in a hospital bed for much of the film’s midsection, you still feel her influence.

Before that happens, though, we also see what Kumail’s life is like with his family: devout Muslims who insist on arranging a marriage for him. His older brother, Naveed (Adeel Akhtar), already has a wife and seems content. His parents (Bollywood legend Anupam Kher and theater veteran Zenobia Shroff, both lovely) just want him to be happy—as long as he carries on their cultural traditions. Caught between Pakistani and American identities, between Islam and agnosticism, Kumail is unsure of who he is—but he knows he can’t tell his family about the white woman who’s become so important to him.

And then, Emily gets sick—a sudden and unexplainable illness that forces doctors to place her in a medically-induced coma. This allows us to meet her parents—the nerdy, down-to-Earth Terry (Ray Romano) and the feisty, no-nonsense Beth (Holly Hunter)—and it places Kumail in the uncomfortable position of getting to know them under dire circumstances. Again, this might not sound like comedy gold. But the way Nanjiani, Romano and Hunter navigate their characters’ daily highs and lows—and dance around each other—is simultaneously pitch perfect and consistently surprising. Romano is great in an unusual dramatic role, but Hunter is just a fierce force of nature, finding both the anger and the pathos in this frustrated, frightened mom.

The details in the hospital scenes make them feel particularly vivid: the colorful quilt from Emily’s childhood bedroom that her mother brings from North Carolina to cover her during her comatose state, or the yacht rock hits piping through tinny speakers in the bleak, cramped waiting room. The situation would feel like hell no matter where you are, but such touches make the characters’ anxiety seem endless.

Which brings us to the only slight drawback: the running time. “The Big Sick” is a Judd Apatow production, and like a number of movies he’s been involved with over the years (“Funny People,” “This Is 40”), it goes on a tad longer than it should. Some tightening, especially toward the end, might have made a great film truly excellent.

But Apatow also has a knack for spotting up-and-coming talent and using his considerable influence to help foster it on the biggest stage and under the brightest lights. He’s done this with Lena Dunham (“Girls”) and Amy Schumer (“Trainwreck”), and he’s done it again with Nanjiani. We’re the ones, though, who truly benefit. 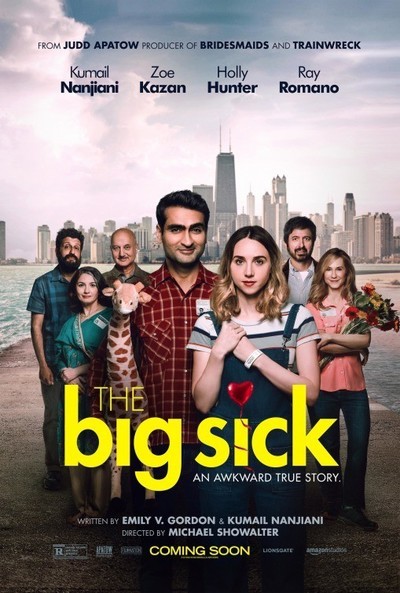