If You Don't, I Will

What happens to a marriage once the early ardor cools? That's the central question in this likable drama starring Mathieu Amalric and Emmanuelle Devos as a husband and wife at a crossroads, and it is explored by writer-director Sophie Fillières (in her fifth feature) in a refreshingly low-key way.

The specific themes at the heart of the story of Pomme and Pierre will be familiar to viewers who've seen domestic psychodramas: the couple are in their forties, still sharing a small Parisian apartment, and taking each other for granted and misunderstanding each other when they aren't practicing the fine art of staying out of each other's way. The epic two-character drama "The Disappearance of Eleanor Rigby" (which was released in three—or is that two?—features) situated its married leads at a comparable crossroads, and many other films have depicted similar situations, including the work of John Cassavetes, whose domestic psychodramas are slyly acknowledged at various spots in this film. (At one point Devos' Pomme introduces herself as "Gena Rowlands," Cassavetes' wife and favorite leading lady.)

Devos and Amalric, who worked tougher in Arnaud Desplechin’s “Kings and Queen," win at least half the storytelling battle by seeming as though they actually have been sharing the same space, and the same life, for years and years. There's a comfort level in their body language but also an extreme, at times comical sensitivity to real or perceived slights, plus the sorts of exchanges in which one partner or the other can feel as though they've been tricked into participating in a test whose purpose and methodology is a mystery. (When Pomme notes that her husband has wrapped himself in a beach towel to try off, he responds, "It was in with the other towels," and she follows up with, "Right. You don't love me anymore." "What's the connection?" he asks. "You don't know. Wrong answer," she says.)

Theirs is not a terribly mysterious kind of distress. They're dealing with issues, plural. Pomme is recovering from surgery on a (thankfully benign) brain tumor, and they're both dealing with empty nest syndrome: their college-age son Romain (Nelson Delapalme) recently moved out. On top of that, Pierre, while basically polite and attentive, is a bit of a hound dog, and Pomme is convinced that he's bored with her and is having an affair with younger TV weather forecaster named Mellie (Josephine de la Baume). Everything comes to a boil when they indulge their mutual fondness for hiking and go off into the woods, where Pomme takes off on her own, not reappearing for days. Romain urges his father to go look for her, which leads to one of the film's most uncomfortably true moments. It's his wife, she's gone, he has no idea where she is, but he's rather enjoying not being around all that anxiety, so he's in no huge rush to find out what happened to her.

The film's second half veers off into the near-allegorical, charting Pomme's rather random and ultimately small-scale misadventures in the woods, though the filmmaker is careful not to tip the story over into proscriptive drama. There's one incident that's impossible not to read in terms of a statement—they put a bottle of champagne into a freezer to chill it, then end up freezing it rock-solid—but for the most part she avoids trying to make any grand pronouncements about love, aging or anything else, believing, probably correctly, that the film's delicate tone and the couple's passive-aggressive, private ways of mis-communicating wouldn't sit well with it. Much of the film's appeal lies in watching the two lead actors enact subtle, honest moments of observed behavior. You know couples like this one. You probably don't want to invite them to parties, but you know them. 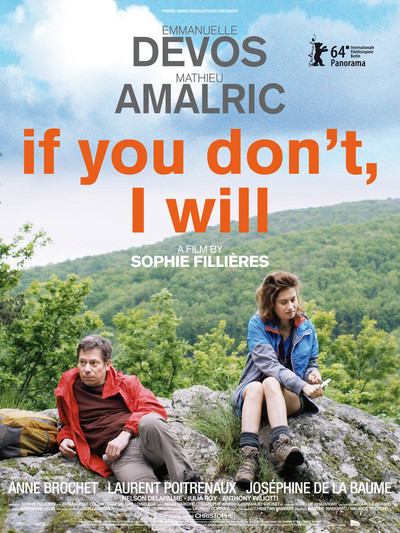