Director Mary McCartney has to strike a difficult balance in "If These Walls Could Sing." Should she talk about the fascinating lore behind the documentary's primary subject—the legendary Abbey Road Studios—or talk about the hand her dad Paul McCartney had in making this recording space a hallowed spot for pilgrimages by artists and fans alike? In an ideal world, she would do both. But sliding to the latter runs the risk of making this film another addition to the already exhaustive list of Beatles-centered movies.

In "If These Walls Could Sing," McCartney slips nearer to recounting her father's history with the space. And yet, the documentary, coming to Disney+, captures the soul and the earworm tunes that emanated from the studio's surroundings with an endearing ease.

Unfortunately, her film falls short of the example set by Greg 'Freddy' Camalier's incisive recollection of FAME studios in "Muscle Shoals." While Camalier's vision thoughtfully parses the mythology, scandals, and music to offer a complete portrait of what made those four walls so special, McCartney becomes too bogged down in purely rendering a jukebox-driven recounting of events.

We get a few biographical notes about Abbey Road: How it was founded as EMI studios, how George Martin became attached to the company, and what was initially recorded there before it became the permanent home of the Beatles. But McCartney soon transitions to her father, who provides anecdotes about the songs recorded there and what instruments contributed to those compositions. Though one does expect McCartney to look toward her famous roots, especially in a story that's so personal to her—she opens "If These Walls Could Sing" by sharing a baby picture of herself in the studio's control room—the time allotted to an already well-covered subject feels misused.

Especially when most music aficionados are probably keenly interested in the overall history of this studio: What makes Abbey Road so unique? Why did so many artists choose these surroundings to record some of the greatest pop music ever?

The answers come in fits and starts. We meet the studio's longtime technician Lester Smith, an intriguing lynchpin in the day-to-day happenings of the space, but that only makes the absence of more people involved with the upkeep of Abbey Road even more glaring. John Williams also appears to discuss recording the soundtracks to "Indiana Jones" and "Star Wars" there. His explanation of the room's unique reverb, setting this studio apart from all others, is the closest we get to someone not talking about being in the space during some famous event but absorbing the area.

That shortcoming doesn't make those stories—Jimmy Page recording "Goldfinger" or Pink Floyd composing "The Piper at the Gates of Dawn" in an adjacent studio while the Beatles were making Sgt. Pepper's Lonely Hearts Club Band—any less awe-inspiring. But it does restrict audiences from learning a few facts that couldn't easily be found in a biography or Wikipedia page. McCartney also struggles to anchor these recollections to the story of Abbey Road. For instance, the inclusion of cellist Cecilia Blach is an imperative chapter in the studio's story. Unfortunately, McCartney makes Blach a bespoke element rather than a fully integrated thread in the fabric of said history through some odd narrative editing choices.

Despite itself, "If These Walls Could Talk" does provide shades of enjoyment: Liam and Noel Gallagher of Oasis discuss the rumor of them being kicked out while recording their third album Be Here Now (they predictably and hilariously have opposite memories of the incident), George Martin's son Giles provides excellent insight into the recordings, and Elton John is always a hoot.

"If These Walls Could Sing" never feels as comprehensive as it could be about the subject. It operates as an addendum to better Beatles documentaries like "Eight Days a Week," "George Harrison: Living in the Material World," and "The Beatles Anthology," and that lack of an identity prevents McCartney's film from being a well-earned tribute to one of the world's iconic studios. However, these shortcomings are not enough to wholly obscure the genuinely delightful parts of McCartney's clear adoration for Abbey Road and the way "If These Walls Could Sing" is as sonically catchy and brisk as a bubblegum pop tune. 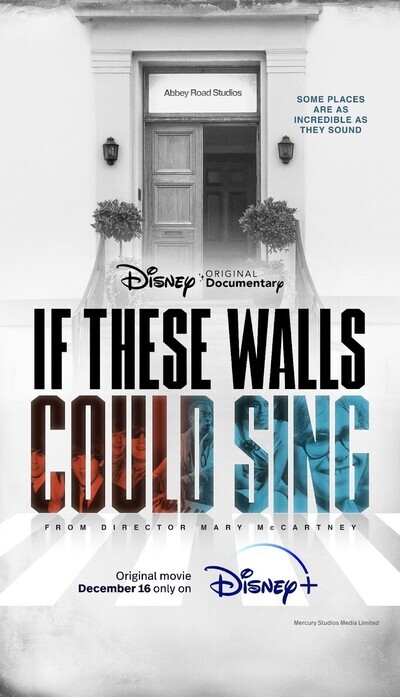 Mary McCartney as Self

Paul McCartney as Self

Ringo Starr as Self

Elton John as Self

Noel Gallagher as Self

Liam Gallagher as Self

John Williams as Self

George Lucas as Self

Nile Rodgers as Self

John Lennon as Self (archive footage)

George Harrison as Self (archive footage)

Linda McCartney as Self (archive footage)

Roger Waters as Self