Songs you've heard a million times before and think you know by heart—Lynyrd Skynyrd's "Freebird," Aretha Franklin's "I Never Loved a Man (The Way I Love You)," the Rolling Stones' "Wild Horses"—might just fall on your ears in an entirely fresh and new way, thanks to the documentary "Muscle Shoals."

First-time filmmaker Greg "Freddy" Camalier explores how a tiny Alabama town on the southern edge of the Tennessee River served as the source of some of the greatest American music of the 1960s and '70s. At two competing recording studios, artists as varied as Percy Sledge and Wilson Pickett, the Rolling Stones and Traffic, Paul Simon and Jimmy Cliff discovered and honed their sounds. And in the process, the classic tunes they produced helped fortify the mythology of the Muscle Shoals Sound.

Bono rhapsodizes early and often about how magical this place is—how the songs seem to come from the mud itself, full of sass and soul and grit. (Although, strangely, the film presents no evidence that U2 ever recorded there.) Camalier buys into the hype with picturesque images of the swamps, the sunflowers, the sun setting over a forest at magic hour like something out of a Terrence Malick movie.

As lovely as these shots are, though, they do make you wonder: What is it about this unlikely, rural town that produced so much great music? Is it the vibe, the history, the players, or the remoteness from pop-culture hubs like New York and Los Angeles?

Camalier never tries to provide a specific answer, but rather allows us to gawk in awe at the prodigious output of the place.

He exhaustively researched his film and crammed it with vivid, intimate archival footage, to the point where he gets a bit too into the weeds over the split between FAME recording studio founder Rick Hall and the rhythm-section players who were crucial to creating its "greasy" sound, as Franklin puts it. Those musicians, who became known as "the Swampers," broke off and created their own recording studio—hence, the line in Lynyrd Skynyrd's "Sweet Home Alabama": "Now Muscle Shoals has got the Swampers. And they've been known to pick a song or two."

What was so astonishing to so many acts visiting for the first time was the discovery that these musicians were white, guys with names like Norbert and Peanut and Spooner, "guys who looked like they worked in the supermarket around the corner," as Bono puts it. They mastered a signature, soulful sound, heavy on drums and bass, making fans worldwide think they were listening to black R&B musicians. And while Alabama remained segregated—or at least fraught with tension in terms of race relations—throughout the '60s, a sense of camaraderie prevailed within these walls that knew no color.

New interviews with music superstars including Mick Jagger, Keith Richards, Steve Winwood and Alicia Keys provide some insight and eye-opening anecdotes. Sledge, who grew up in the area and was working as a hospital orderly, recalls fondly how he was shaking like a leaf when he walked into the studio to record "When a Man Loves a Woman" in 1966. The story of the origin of "Freebird"—a song you could probably never hear again and that would be totally fine—also has plenty of amusing moments.

"Muscle Shoals" feels a tad overlong and redundant after a while—yes, it's a mythical and historic place, we get it—and it might have functioned even better as an hour-long TV documentary. But with such great music coming, one hit after after another, it's always a joy to watch. 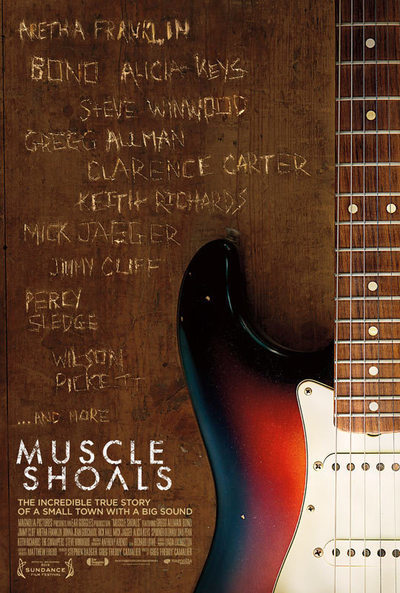 Gregg Allman as Himself

Clarence Carter as Himself

Jimmy Cliff as Himself

Aretha Franklin as Herself