I Am Not Your Negro

We are republishing this piece on the homepage in allegiance with a critical American movement that upholds Black voices. For a growing resource list with information on where you can donate, connect with activists, learn more about the protests, and find anti-racism reading, click here. "I Am Not Your Negro" is currently streaming on Amazon, and available at a discount rental price on digital platforms. #BlackLivesMatter.

Raoul Peck's "I Am Not Your Negro" is a political statement and a deep look into the mind of James Baldwin, one of the 20th century's greatest writers and social critics. It is also an unusual and striking cinematic biography with a specific mission: to show America through the eyes of an African-American, scattering shreds of hope amid horror, exasperation and disgust.

The film is built around material that was created largely by its subject (the voice-over narration, read by Samuel L. Jackson, comes from Baldwin's last, unfinished novel), and Peck illustrates much of it with documentary and news footage, vintage photos, news clippings and onscreen text. And yet we don't get all that much imagery of Baldwin himself. This choice might might seem puzzling at first he was, after all, one of the few prominent African-American intellectuals who were regular presences on network TV in the 1960s, and from what little we see of those moments (the highlights include some choice bits from "The Dick Cavett Show") it's clear that Peck could have built a satisfying feature just around James Baldwin the camera subject: that's how authoritative he was.

But this decision and others make sense as the film unfolds. "I Am Not Your Negro" is not interested in giving us the full arc of Baldwin's life. It is mainly interested in presenting how he saw and wrote about the world. And it does it with imagination, sensitivity, and passion tempered by sorrow.

The bits of Baldwin's novel that have been turned into narration focus on the 1960s, with the murders of John F. Kennedy, Medgar Evers, Malcolm X and the Reverend Dr. Martin Luther King, Jr. serving as milestones in despair. Along this historical clothesline, Peck strings a series of observations and anecdotes, sly asides and words of wisdom, and tries to reconcile the difference between what the United States says it stands for and what it actually does.

We hear Baldwin's conflicted, evolving reaction to the Civil Rights movement (including the internal debates about violent vs. nonviolent resistance) and interracial relationships (the hero of Baldwin's novel tells a story about how he and his first serious girlfriend, a white girl, used to leave the site of their trysts individually, several minutes apart, then sit far apart from each other on subway cars). Baldwin tells us what he thinks the carefully constructed images of Doris Day, John Wayne, Gary Cooper, Ray Charles, Sidney Poitier and Harry Belafonte reveal about how white Americans see themselves and others. We get his take on mid-century American attitudes towards the Horatio Alger myth (exactly that, a myth), capitalism (a way of putting numbers above all else), mainstream entertainment (a narcotic) and the possibility of reconciliation between the races (slim, unless whites come to grips with the full impact of slavery and Jim Crow). And he treats us to snippets of highly personal film criticism that searches movies for evidence of the mentality of the culture that made it. The highlight is a bit where Baldwin describes a black audience's reaction to the scene in Stanley Kramer's interracial buddy movie "The Defiant Ones," where Tony Curtis' white chain gang inmate falls off a train and Poitier's character leaps off to help him: the crowd yelled at Poitier, "What are you doing?"

Peck miscaculates, I think, in lifting us out of the 20th century and linking many of Baldwin's observations about his own time to events and cultural developments that occurred after his death. Mixed in with the historical footage and photos and the scenes from old movies are bits from trashy daytime talk shows and reality TV shows, and images that allude to the financial meltdown of 2008, the Ferguson uprising, Barack Obama's election, and the presidential campaign of 2016. These elements don't damage the movie too terribly. But they do break the spell Peck weaves. And there are times when the present-tense stuff diminishes the timelessness of Baldwin's observations by connecting them too bluntly to American life in the second decade of the new millennium. Like Baldwin's writing, this movie will always be relevant, and yet here it is, dating itself.

No matter: Baldwin's voice as a writer comes through powerfully anyway. It was wise to have Jackson read Baldwin's words plainly in his own voice, rather than attempt an impersonation. This decision shines a spotlight on the work, which is where the spotlight should always be in a movie about an artist. And it draws intuitive but general connections between Baldwin's life and Baldwin's fictionalization of it, without making any claims that the text itself can't support.

Turning Baldwin into a chorus and occasionally a bystander in a story drawn from his own experience proves to be a masterstroke as well. Baldwin is bearing witness in the narration, and Peck turns him into a witness onscreen, too, briefly putting up pictures of Baldwin alongside politicians and artists but never holding them for long, and locating Baldwin within photo montages of important, sorrowful events (such as King's funeral), establishing that he was there but never privileging his grief over the grief of others. This is not a portrait of one man, James Baldwin, but of the nation he wrote about, as seen through his eyes. It's a film that bears witness to a writer bearing witness.

"I Am Not Your Negro" is currently streaming on Amazon, and available at a discount rental price on digital platforms. 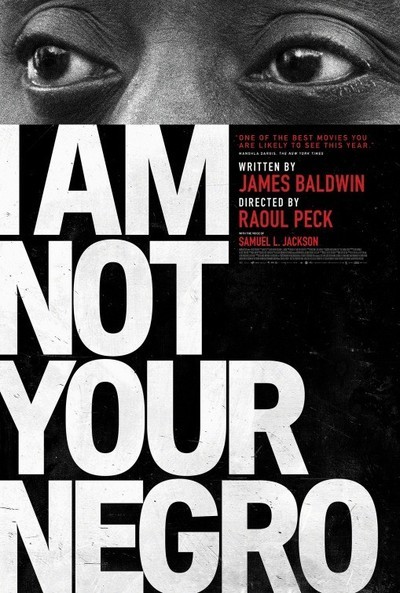