If you sent only the music of Jimmy Iovine and Dr. Dre into outer space, alien cultures would still have a pretty good picture of the American industry over the last four decades. Premiering this Sunday on HBO, and then airing over the next three nights, “The Defiant Ones” covers the arc of both men, devoting the first two episodes (of four) to their careers before they met and the second two to how music changed when they united their formidable talents. The documentary, directed and co-written by Allen Hughes, has elements of fan service—negative aspects of either gentleman’s personal or professional lives often feel rushed—but it makes the case that this pair deserves carving on the Mt. Rushmore of the music industry. And while the documentary falls into the trap of a talking-head structure, these are some damn impressive heads. Basically, everyone that Iovine and Dre have worked with over the years appears to discuss their legacy and importance to the industry. Pay attention, Earthlings.

Hughes was not only granted access to Iovine and Dre over a three-year period, he assembled a Hall of Fame list of interview subjects to discuss working with the men. The result is a project that feels like it has weight instead of merely a fan letter to a couple legends. Rock icons like Bruce Springsteen, Tom Petty, Bono, Patti Smith and Stevie Nicks discuss their collaborations with Iovine; rap masters like Ice Cube, Snoop Dogg, Eminem and Kendrick Lamar pay homage to Dre. And all of them have interesting stories to tell. In a sense, “The Defiant Ones” is a four-hour Hall of Fame presentation, making clear how much Iovine and Dre have not just been a part of the industry but shaped it and changed it forever.

Personally, I love anecdotes that illustrate the ripple effect of creativity. How does “Born to Run” lead to “Because the Night,” which leads to “Refugee”? How did “Rico Suave” change the music industry? Did a paintball gun really inspire “Fuck the Police”? How did the rap industry survive the death of Tupac? What happened after streaming music became the norm? Stories about the first time that Dre heard Snoop Dogg or his first meeting with Eminem are simply the kind of thing I love hearing—there’s something about those seemingly fateful moments in music history that make for good television, especially for those of us old enough to have seen all of this take place.

There are times when the chronological format that jumps from Iovine to Dre even before they knew each other feels like it hampers the piece. In one case, the show jumps from the car accident that destroyed the voice of The D.O.C. of N.W.A. fame back to the relationship status between Iovine and Nicks and I almost got whiplash. And while the show doesn’t shy away from the dark chapters of their lives—in one of the most interesting, Dee Barnes discusses the assault on her by Dre, and he admits to considering it a blemish on who he is as a man—it always moves quickly back to success. In the fourth chapter, Iovine discusses how horses have to have blinders on so they don’t see the competition, suggesting that successful people need to do the same. “The Defiant Ones” follows this model as well, never even mentioning an act that Iovine or Dre didn’t work with, when it would have been nice to give the gentlemen some context within the bigger picture of the music industry. And the production can sometimes get a little overheated, never more so than in in a segment that parallels the controversies between Tupac Shakur and Marilyn Manson in a way that feels forced.

“The Defiant Ones” stumbles most in the final half-hour, which often feels like a commercial for Beats headphones, the latest mega-success for Iovine and Dre. Although, by that point, I didn’t really care because I had heard so many interesting stories over the previous three-and-a-half episodes. Most of all, I was allowed insight into two men who lived up to the adjective in the title of this show. Every time, Jimmy Iovine and Dr. Dre were told something wouldn’t work or they couldn’t do something, they defied traditional thinking about the music industry, and changed it forever. They’re not just producers. They’re not just businessmen. They didn’t just follow the current, they changed the flow of the stream. It's a reminder that our true visionaries don’t follow a template; they make a new one. 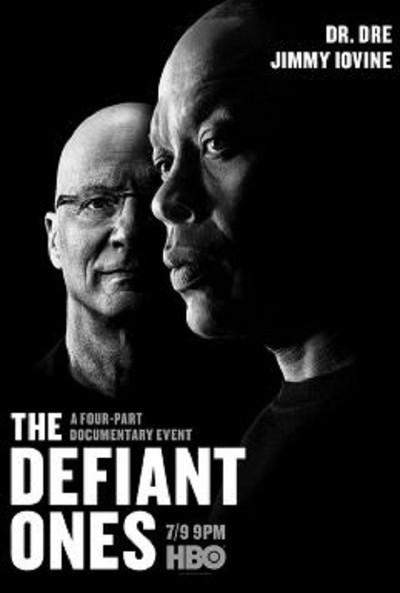 Dr. Dre as Himself

Jimmy Iovine as Himself