Gerard Butler caught my attention back when I was a young theater nerd going through her “The Phantom of the Opera” stage. Since then, Butler’s acting seems to have ossified. Gone are his more limber moments of intensely singing or screaming as he did in “Phantom” and “300.” Now, he acts stoically for almost every part in recent memory, most notably the “Fallen” series, where he saves government officials from showy acts of terrorism. Butler will furrow his brow to feign deep thinking, the sound of his voice will drop to show some newly found resolve for whatever he’s going to do next. Explosions and action happen around Butler, but he will not be fazed—or forced to emote.

In essence, “Hunter Killer” shares some similarities to “Olympus Has Fallen” and “London Has Fallen.” Butler also saves government officials and by extension, averts geopolitical chaos in this movie. Instead of facing off against terrorists as he does in the “Fallen” movies, the threat to Pax Americana is a Russian coup that topples that country’s president. This infighting could not come at a worst time for the Americans, who have a submarine unaccounted for in enemy territory. So the powers-to-be in the States send Captain Joe Glass (Butler) for a top-secret search mission.

Between tense exchanges shared by Rear Admiral John Fisk (Common) and Chairman of the Joint Chiefs of Staff Charles Donnegan (Gary Oldman), the two senior officials are at odds with how to proceed with the operation. Glass’ ship may need to defend itself, which invariably would start another Cold War. But unless someone doesn’t rescue the deposed Russian president soon, the Cold War may already be underway by Russia’s rogue military leader.

Tacked on to an already busy plot is the land component to the sea rescue of the Russian president. Almost midway through the movie, the audience is introduced to a group of ragtag Marines training up their newest member when they get the call for an impossible mission to spy on the enemy. They’re the ones who report back to D.C. about the coup, and in a last ditch effort to stave off an all-out war, Fisk asks them to step in and rescue the president and bring him to the sub Glass is commanding so they can all escape. Sound like a good plan? I didn’t think so.

Another anchor weighing down “Hunter Killer” are the occasional serious moments that veer into parody—like when senior officials hold top-secret conversations in the center of a busy government building, instead of a private office. It's also laughable how the movie portrays Glass the Merciful as a nonviolent man at heart, by showing how he spares the life of a deer when he sees it has a family. Glass also spends ample time reminding everyone around him that he’s just like his working-class crew and not one of those Annapolis guys from the Naval Academy—channeling the conservative attitude against people who went to college. It’s those kinds of forgettable scenes that are only memorable because they’re so odd.

But there is no inner life for Butler’s character, no moment where he shows doubt or reflects on his choices, no shot of a family back home. Glass mentions some kind of an incident that marks his naval career, but then it’s never referred to again or shows how the experience changed him. Although he’s supposed to be the sympathetic one fighting to save lives on both sides, it’s the other members of his crew who shows emotions—fear, panic, uncertainty, joy, you name it—while Butler looks robotically on, almost as if he’s phoning his performance in until the paycheck clears. Even a Russian prisoner of war taken by the Americans shows more emotions in his eyes than Butler can muster with his body.

Butler’s performance—or lack thereof—keeps “Hunter Killer” from breaking any ground in the field of war movies. It’s also an odd time to release a movie that embraces collaborating with the Russians and painting bad and good guys with such broad strokes. This puts “Hunter Killer” in murky geopolitical waters I don’t think it knows how to navigate. Neither the movie or Butler is nearly entertaining enough to distract us. 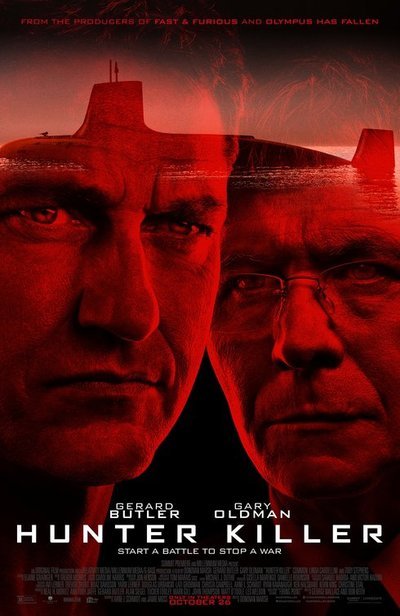 Writer (based on the novel "Firing Point" written by)