We all live in a Red submarine...

Ed Harris in "Phantom" is like Steve Carlton with the Philadelphia Phillies in 1972 — delivering a wall-to-wall, amazing performance that's lost in a sea of dreadfulness.

That season, Carlton won 27 games for a Phillies team that finished 59-97. Harris delivers a nomination-worthy performance in a movie with a throwaway title, an abundance of closeups that provoke unintentional laughs, a few bizarre supernatural touches and one of the loopier endings in recent memory.

If they gave a Cy Young Award for acting, Harris would be a contender. That he kidnaps our attention and holds it throughout "Phantom" while playing a Soviet submarine captain who speaks English without a trace of an accent makes his work all the more impressive.

Inspired by true events, as they say, but filled with speculative fiction, "Phantom" takes place almost entirely aboard a nearly obsolete Soviet submarine in 1968. The sub will be stripped of some key elements and then sold to the Chinese — but first there's one last mission.

Harris plays Demi, a craggy-faced, world-weary Soviet sub commander who battles epilepsy, drinks too much and is plagued by flashbacks that seem right out of a horror movie. Nearing the end of his career, Demi has never escaped the shadow of his father, a legend in Soviet military lore. (How's that for an unoriginal twist?) But even though Demi's wearing a Soviet uniform, in charge of a Soviet ship and living in, well, the Soviet Union, I spent the first few minutes of the film wondering if Demi was actually an American, given that he was speaking perfect English without a trace of an accent.

Turns out writer-director Todd Robinson has made the bold and somewhat goofy choice to have all his actors talk in their normal voices, as if they're doing a table read and not in full costume with the cameras rolling. Whether it's William Fichtner as Demi's fiercely loyal right-hand man, Alex, or David Duchovny as Bruni, a "technician" who clearly has ulterior motives joining Demi's crew at the last moment, everybody just speaks "American."

Granted, it's always a bit jarring when a film about, say, German soldiers in World War II has all the actors speaking English with German accents — but it's even more unsettling when a bunch of "Soviet" sailors are talking about "the Americans," and yet they all sound like they're from Jersey or Chicago or Cali.

Robinson does a fine job of maneuvering the cast and his camera through the sub's narrow, labyrinthine corridors, but the murky, claustrophobic atmosphere turns thuddingly dull because we almost never leave the submarine, and the submarine almost never surfaces. "Phantom" paints itself into a tiny corner where there's little choice but to rely on tight shots of sweaty actors communicating in what we presume to be authentic sub-speak as Demi and his loyal crew square off against Bruni and his nefarious plans for the vessel.

There's a mutiny, as there so often is with movies of this sort, and we finally learn what Bruni and his KGB thugs have in store for the old sub. Suffice to say they've got a plan that could trigger World War III — or just get everybody aboard killed for no good reason. We get the obligatory few scenes in which a character goes on and on about another character's back story, for no other reason than to fill in the audience. Eventually we learn the true nature of those horrific flashbacks plaguing Demi.

With his smirk and his cool line readings, Duchovny is wildly miscast as a Cold War Soviet spy. Fichtner does fine work as a No. 2 whose loyalty to his commander and his country go hand in hand. Everybody else tries hard with material that asks us to not only suspend disbelief but also to expel it for the duration of the film. The ending is a howler, provoking uneasy chuckles when we're supposed to be feeling chills and maybe a tear or two. Whatever really happened with that sub in 1968, we can be reasonably sure this wasn't it.

But then there's Harris, holding our attention, whether he's springing into action or motionless, simply reflecting on a hard life nearing its end, with more failures than triumphs, more regrets than warm memories. It is a stellar performance from an actor who always comes to play, even when the story almost guarantees a lost cause. 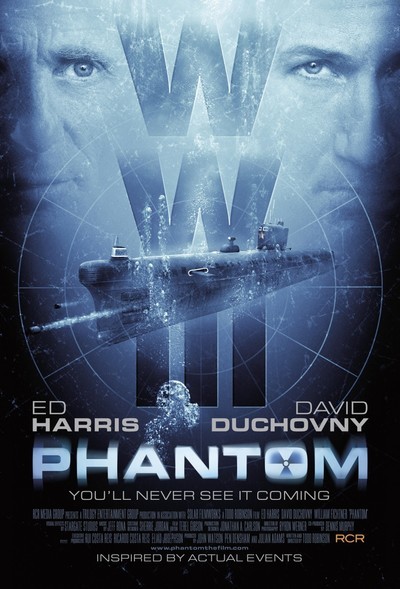 Rated R for scenes of violence