In the days after the horrific car crash that took Paul Walker's life on Nov. 30, many tributes were paid to the handsome 40-year-old actor best known for his undercover lawman in the "Fast & Furious" movies. He was a great dad to his teen daughter. He was given to generous acts of charity, once secretly purchasing a pricey engagement ring for an Iraq war vet and his fiancée. He was a capable action hero, and his likability factor onscreen and off was through the roof. What you didn't hear, however, was much effusive praise of his acting talent.

That may change once "Hours," the first of his two finished movies, arrives in theaters and on VOD this weekend. Set in a New Orleans hospital during the aftermath of Hurricane Katrina, the thriller isn't perfect, the budget deficiencies are apparent, and Walker is pretty much forced to carry the entire weight of the drama on his well-muscled shoulders.

That's not surprising, considering he is the only recognizable cast member, and his main co-star ends up being a newborn infant. What is unexpected is how well he pulls off what is essentially a one-man show.

Once the story gets going after a rather clumsy and protracted opening, screenwriter Eric Heisserer ("Final Destination 5"), in his directing debut, allows Walker plenty of room to more than rise to the occasion. The film ends up being a rather ingenious survival tale crossed with a tension-ratcheting gimmick—somewhat akin to "Speed"'s bomb-on-a bus scenario—that makes every ticking minute count.

First, however, we must patiently learn all the details of the situation. When we first meet his character Nolan Hayes, his pregnant wife Abigail (Genesis Rodriguez) has gone into labor five weeks early. Nolan rushes her to the hospital just as the historic storm starts brewing. The tragic news that his wife has died leaves Nolan more numb than tearful, but at least their daughter is alive. However, a doctor explains the preemie must be fed through an IV and placed in a ventilator, remaining there for at least 48 hours.

However, once Katrina unleashes her wrath and the flood waters rapidly rise (clips of actual newscasts keep us up to date), the hospital is forced to evacuate. That leaves Nolan and his child on their own since the ventilator can't be moved. Then the power cuts out, the back-up generator fails and Walker's character spends the rest of the film cranking a battery that can only be recharged for a couple minutes at a time.

Much like Sandra Bullock in "Gravity" or Tom Hanks in "Cast Away," Walker's Nolan finds surprisingly engaging if compelling ways to pass the time. He speaks to his silent daughter, telling her about her mother while pulling out photos and other souvenirs—including her engagement and wedding rings, taken off in a rush before going into the delivery room—and placing them atop the ventilator. He hunts down refill bags for the IV drip, changes a diaper for the first time, seeks out a radio transmitter after cell service goes out, remembers how he and his wife met and fell in love, and rushes to the rooftop and back after failing to flag down a helicopter. Matters grow more dire when men with guns start lurking in the darkened hallways, scavenging for food, drugs and whatever they need to get by.

His pretty face obscured by a beard and his considerable physicality tested, Walker manages to be both tender and tough, and to watch him stretch himself so well is a pleasure. It's much like watching the late James Gandolfini up-end his menacing image with his sweet portrayal of a lovable lug in "Enough Said." It's a sad experience knowing he is no longer around, but also happy, since he left behind one more memorable performance.

Heisserer doesn't get everything right, but he sure knows how to milk a taut ending, including a miraculous final shot, one that would have drawn tears even if Walker were still around. For those who wish to see the actor at his best, "Hours" is worth the time. 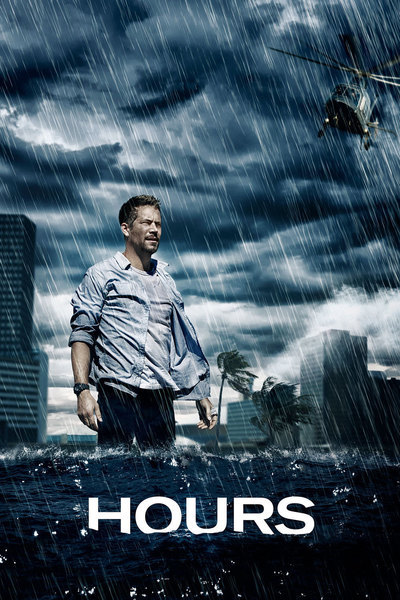