This dedication appears right before the end credits of "Enough Said." It will likely turn a pleasant-enough comedy into a two-hanky weeper for many. That's because the wryly amusing look at the foibles of middle-age modern romance by filmmaker Nicole Holofcener ("Please Give," "Friends With Money") happens to be the second-to-last film with James Gandolfini in the cast.

The actor, who left a massive crater of an impression on the TV landscape in his six seasons as hot-headed mob boss and suburban dad Tony on "The Sopranos," died in June from a heart attack at age 51. His legacy includes a parade of Tony-inspired anti-heroes in such off-network shows as "Breaking Bad" and "Mad Men," along with legions of bereft admirers.

But while there is an extra pang of poignancy in observing Gandolfini in one of his final roles, there is also joy in the sight of him breaking free from the confines of his tough-guy straitjacket, and playing a sweet, affable, even sexy lug with an abundance of honesty, humor and heart.

Gandolfini worked steadily and sometimes memorably as part of an ensemble in such features as "True Romance," "Get Shorty" and "Zero Dark Thirty," but he never found a defining film character that was anywhere near as rich and complex as Tony Soprano—until now, perhaps. His Albert—a divorced dad and self-described slob whose ex nitpicked his every quirk, from his avoiding the use of bedside tables to his habit of picking onions out of his guacamole—supposedly reflects his own gentle-giant nature.

The set-up for "Enough Said" and many of its running gags finds Holofcener in more commercial terrain than usual—in what is almost a sitcom vein at times. Julia Louis-Dreyfus plays a masseuse named Eva who drags her unwieldy table (milked for numerous laughs) around Los Angeles while making house calls. She, too, is divorced, and is more wrapped up in mourning the upcoming loss of her college-bound daughter than in looking for a new relationship.

Wouldn't you know that Albert and Eva would bond at a cocktail party, since his daughter is going away to school as well.

What you wouldn't know, however, is that Eva clicks at the same gathering with Marianne (Holofcener regular Catherine Keener, striking just the right note of easy aloofness). She's a goddess-like woman of wealth and taste who actually makes a living as a poet. She also is pals with Joni Mitchell, which is to Southern Californians of a certain age what being friend of Bruce Springsteen is to New Jerseyeans.

Eva signs her up as a client, and before too long realizes from her petty kvetching about her former husband's idiosyncrasies that she is Albert's ex-wife.

Of course, Eva wants to have her Albert cake and hang with cool-chick Marianne as well. She and Albert laugh at each other's jokes. He invites her over for brunch even if he is still in his sleeping attire. The sex is good, and she doesn't mind that his pudgy hands look like "paddles."  Unfortunately, the poet's complaints start to affect Eva's feelings about Albert—she calls Marianne "a human TripAdvisor," referring to the online travel review site. And he, being a rather sensitive soul, soon can't help but notice.

We all know what happens when such tangled webs are woven. This one also involves some extraneous strands, including Eva's co-opting of her daughter's best friend as an empty-nest replacement and Toni Collette as Eva's best pal, a therapist who clearly might benefit from getting psychiatric help, given her furniture-rearranging obsession and passive-aggressive relationship with her inept housekeeper.

Even as Gandolfini joins the ranks of unlikely plus-size movie Romeos such as Ernest Borgnine in "Marty" and John Candy in "Only the Lonely," it is interesting to contrast his approach to his character with that of Louis-Dreyfus. The funny lady might have made TV hay as yuppie princess Elaine Benes on "Seinfeld" and, currently, as our nation's second-in-command on the scathing political series "Veep." But she hardly ever was convincing as movie star material. That may be why Louis-Dreyfus only has eight live-action features on her resume, with several of the titles—especially 1994's "North" (of which Roger Ebert once famously wrote, "I hated this movie. Hated hated hated hated hated this movie")—landing squarely in the turkey category. Although Holofcener hones in on her lead's strengths—great reaction shots and terrific comic timing—the actress too often comes off as if she is still trading dating quips with Jerry and George while eating a big salad at Monk's.

Luckily, this is not the case in her scenes opposite Gandolfini, who allows us to forget the ugly temper and sadistic tendencies of his most famous creation while lending Louis-Dreyfus some of his teddy-bear warmth. Their give-and-take provides some of the movie's best moments. "I'm tired of being funny," she says after engaging in flirty banter. "Me, too," he says, before slyly adding, "But you're not funny."

There is a scene in Holofcener's 2001 film "Lovely & Amazing" where Emily Mortimer stands naked before her new sleazebag lover while he assesses her every physical imperfection, real or not. Similarly, Gandolfini's Albert—if not the actor himself—has had a lifetime of being judged for his excessive girth. As his character says of his upbringing, "I was fed and told not to move." The director was smart enough to take a trait that often caused an actor to be be typecast as a menacing figure and turn it into a strength. If you have to bid farewell to someone this talented, what better way than to finally take advantage of all Gandolfini's wonderfully rough-edged attributes? Enough said, indeed. 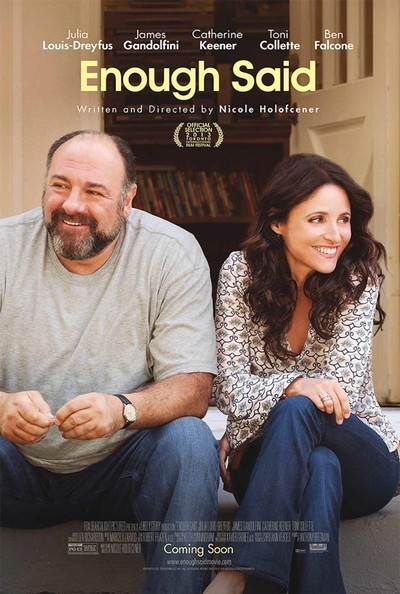 Ben Falcone as Will