Peter Nicks' "Homeroom" is a documentary about a single, historically pivotal school year, 2019-2020. The subjects are a politically engaged group of students at Oakland High School who enter classes in the fall having no idea that two historical tidal waves are about to knock them all over: the murder of George Floyd and the Covid-19 pandemic.

"Homeroom" is the third in a series of Nicks documentaries on Oakland institutions: "The Waiting Room" is about an Oakland hospital, and "The Force" is about the police department. They all aim for a you-are-there immediacy. "Homeroom" doesn't have any talking head interviews where people answer questions while seated in a chair. Like the documentaries of Frederick Wiseman ("Jackson Heights"), and television projects by filmmakers like Terence Wrong (who did multiple series about Boston institutions for ABC TV in the aughts), it's the larger community that's the subject.

The camera is always active, searching. The audio is caught-in-the-moment, sometimes while there's a lots of chatter and background noise going on. The filmmaking tries to capture the changes happening on a macro level by immersing us in journalistically-charged details that illuminate the larger culture, such as the way the students get their information through texts, pictures, video, and social media posts on their phones.

There are a lot of scenes where politically engaged kids attend city council meetings, discuss what's happening in them and how it affects their schooling, and address the elected representatives to ask questions or make demands. Denilson Garibo, a student governing board representative, emerges as the closest thing to a main character, in part because he's so earnest and charismatic and idealistic, and therefore the perfect vessel to convey how smart teenagers become disillusioned by the hypocrisies, self-serving justifications, and moral shortcuts of adults who are supposed to be looking out for them.

Still, "Homeroom" avoids focusing too much on any one person, instead going for a sort of panoramic, ensemble-oriented "network narrative" approach where the movements of particular characters illustrate larger ideas about history and society. This is the source of the film's weaknesses as well as its strength. There are going to be moments where you wish they'd stayed in a scene a bit longer, or followed through on a tantalizingly introduced notion or colorful character. But you also get a collective sense of what it meant to be alive and a student at that high school during that specific time, and that's something that few films even think to try to give you.

There's a borderline horror-movie "Look out behind you!" sensibility to watching these kids at city council meetings in early 2019, thinking that painful cuts to their schools' budgets are the biggest things that could impact them. The George Floyd protests and Covid-19 are on the horizon, and anyone watching this movie will have a reference point for the experiences and images that are about to ensue. The entire look of the film changes after Covid, with the filmmaker's already plentiful use of electronic screens (laptops and phones, mainly) becoming the default image. The kids become isolated from each other; from the physical institution that is the school; from their local government. and from life itself. How meaningful is the flow of life when you can't gather?

Many films like this one have already been made, and many more will be made, because the experience of social upheaval is one that everyone can relate to, even if they never felt that they had a personal stake in the spectacular, upsetting images appearing on their handheld devices. What can cinema add to our understanding of these changes, though? That's the question.

You actually get something of an answer while watching this movie. "Homeroom" is most valuable not in its exploration of individual personalities (it isn't really interested in sustained character portraits) but in the way that it captures subtle but culture-wide changes, in the way that a poet, photographer, or painter might—simply by presenting a series of quiet images of Oakland streets nearly devoid of people and cars after lockdown, or holding on a tight shot of a single phone screen that scrolls through footage of police brutality and protests against it. The changes that occurred during that year are also expressed in the contrast between scenes in the first part the movie and the final section. A fall, 2019 classroom scene immerses us in the hubbub of kids talking amongst themselves, fidgeting, and goofing around in class; it's a poignant contrast to a 2020 shot of a sea of immobile, silent students' faces on a laptop screen.

Change is about decisive shift in speed, emphasis, and norms over a period of time, as much as it's about the shock of any individual event. "Homeroom" is at its best when it's helping us understand this. When people say, of a world-shaking era, "Everything was different after that," they're describing the dynamics captured in "Homeroom." 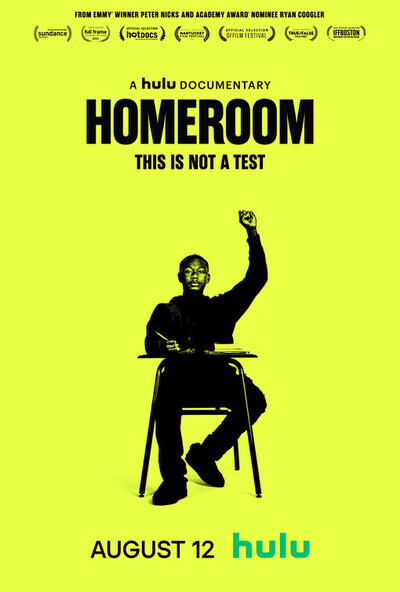 Denilson Garibo as Self

Libby Schaaf as Self